Massive Wagons have come a long way since they got my vote at the Hard Rock Hell Battle Of The Bands competition “Highway to Hell” in 2013, to win a worldwide recording deal with Off Yer Rocka record label.

Having released their debut album ‘Fire It Up’ the year before, this was the step up the band were looking for, and armed with the back up from HRH, the Wagon relentlessly rolled on, so much so, that three album releases later, the band have been snapped up by Earache records who release the much anticipated ‘Full Nelson’ long player in August.

Which brings us nicely to tonight’s gig at the famous London Borderline, which they have sold out weeks in advance. Very impressive indeed.

As the Slade intro fades out, the band hit the stage like a whirlwind with the glorious 12 bar boogie of ‘Back To The Stack’, their very own tribute to Status Quo legend Rick Parfitt, and just the mention of those two bands should leave the listener under no illusion as to what the Wagons are all about. 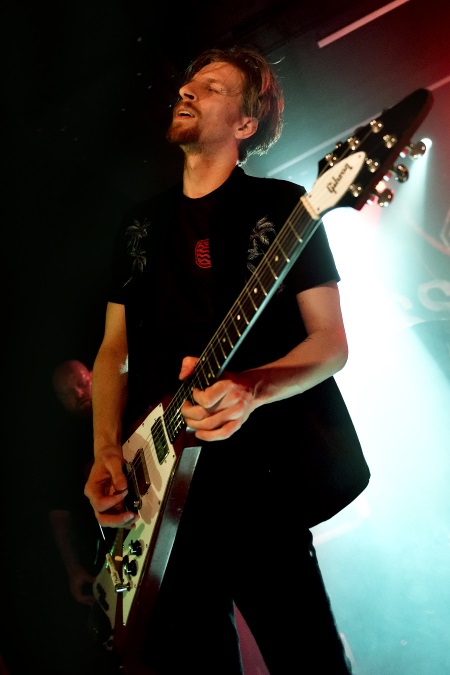 Frontman Baz Mills instantly demands the crowd “get ’em in the air” and with a hint of the great Noddy Holder in his voice, he pumps out some very clever and nicely crafted lyrics with a nod towards the mighty Quo.

The line “back to the stack, maximum attack” is just that, a maximum attack with the band grabbing the crowd by the scruff of the neck, this song is the perfect set opener and the line “Why don’t you raise your glass for Rick, cos I’m raising mine” sees a sea of arms raised and a river of beer spilt.

These guys are having fun and they’re making damn sure everyone else is having fun too. 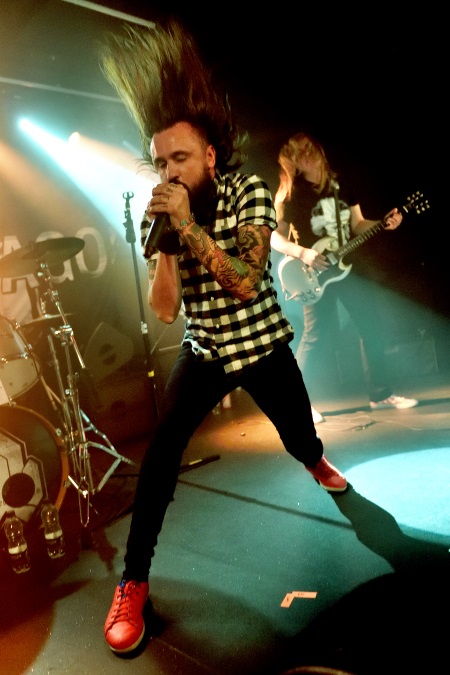 Next up is ‘Nails’, with drummer Alex Thistlewhaite laying down the beat before brother Adam hits us with the opening riff which is hard as nails and gets the whole of the Borderline bouncing in unison with Mills and his twirling mic stand.

Baz spits out the line “when your down on your luck and no one gives a fuck”, another great track perfect for the live set, they’ve really hit the nail on the head with this one, and it’s not hard to hear why Progress Wrestling World Champion Travis Banks has adopted this song as his theme tune.

Mills informs us with a wry smile that ‘Jodie’ is about a girl he used to know, slowing the pace slightly before leading into new song ‘Under No Illusion’ which the crowd embrace like an old friend. 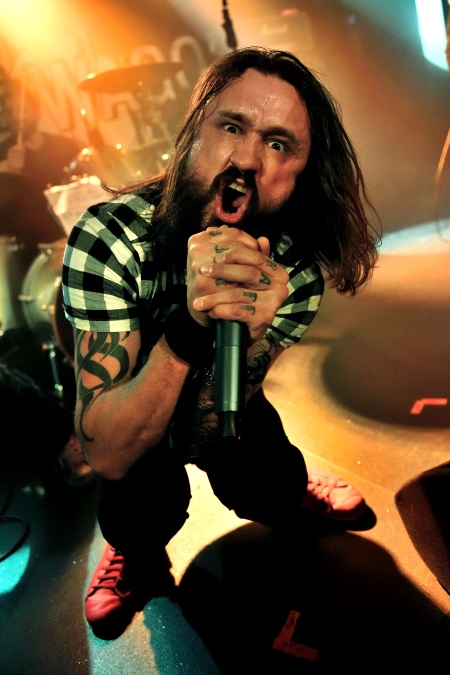 The nautical-themed ‘The Day We Fell’ about the hunt for a great white devil whale, has one of those melodic choruses that the Wagons do so well, which leaves it ringing around your head for days on end, and has the crowd fist pumping the air and singing “raising hell”, Baz has got them hook line and sinker.

‘Hate Me’ is another one from the new album which to these ears, has a lovely Dogs D’Amour feel to it and sees Mills pleading “why do you hate me”, though it’s hard to imagine anyone not liking this laddish Lancastrian. 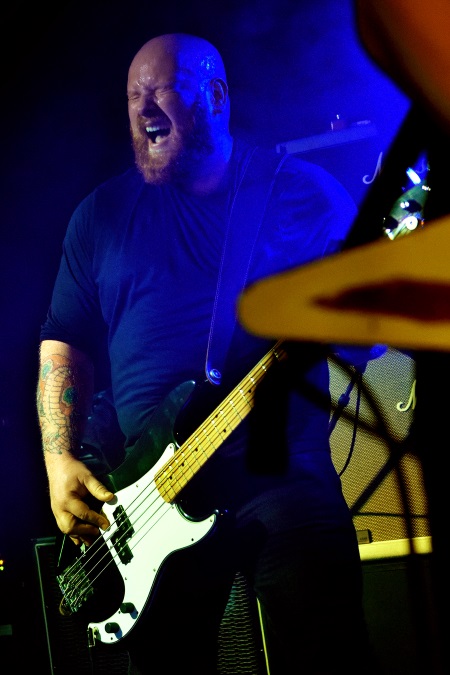 With more hooks than a pirate convention, ‘Ratio’ has another one of those big big choruses that’s catchier than the common cold. It’s a crowd favourite and it’s easy to hear why, written, one imagines, with a bigger stage than tonight in mind.

Each time I watch the video, it’s in the hope that man mountain bass player Bowz shows less restraint this time and knocks the guy out, instead of just emptying the chocolates on the floor and throwing the flowers, bitch! Yeah, you need to watch it. 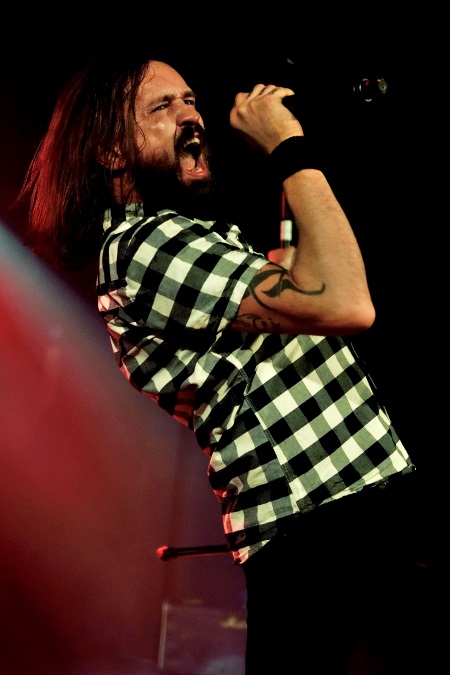 ‘Shit Sweat Death’ ups the tempo to the max with new guitarist Stephen Holl playing like his life depends on it, its killer riff and scattergun lyrics really getting the crowd going and there’s definitely plenty of sweat about, thankfully I didn’t see any shit or death.

‘Fighting Jack’ leads into the final new song of the night, ‘China Plates’ which sees the singer comically moaning about the negatives of social media, pointing out random perpetrators in the audience, much to the delight of the person standing next to them. 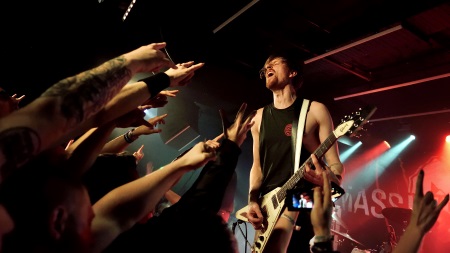 ‘Fight The System’, the almost poppy ‘Red Dress’ and ‘Tokyo’ lead into set closer ‘Fee Fi Fo Fum’, which is a giant of a song that brings this no frills, no bullshit Rock n Roll show to a glorious end.

The unstoppable juggernaut of the Massive Wagons Rock n Roll Roadshow is Rollin’ on, grabbing everyone in its path in a full nelson that they ain’t ever getting out of. 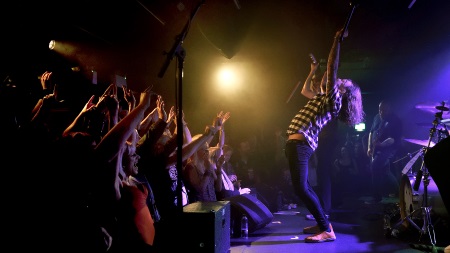 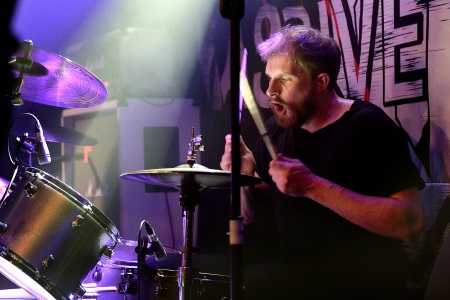 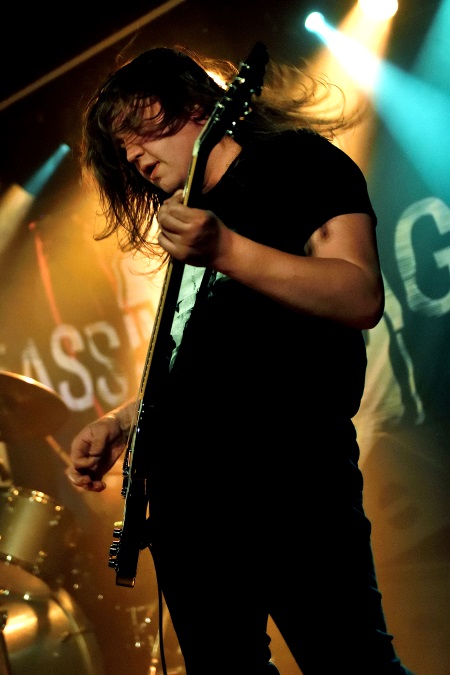