Anaal Nathrakh have always been the ultimate Extreme Metal band. Their first full length, ‘The Codex Necro’, was such an aural and mental shock it metaphorically punched me into the following week.

Their unique meld of Industrial Black Metal and Grindcore has been an ongoing source of aural devastation par excellence ever since.

Increasingly, with more recent releases and even more so with ‘Endarkenment’, Anaal Nathrakh have a very accessible quality.

They still continue to be as brutal and chaotic as hell – Anaal fans would have it no other way – but with each album they seem to be able to ride and control the wave of bile and vitriol that always spews forth in the creation of an Anaal album, to the extent that the listener can ride in the cathartic wake it creates.

Vocalist Dave Hunt told us: “I think in terms of feel, it’s brighter, more open and direct than maybe we’ve been in the past.

“Obviously I don’t mean its happy-go-lucky sounding, or suggestive of a sunny disposition.

“I mean something more like it burns with light rather than glowers with darkness. It’s coruscating.” 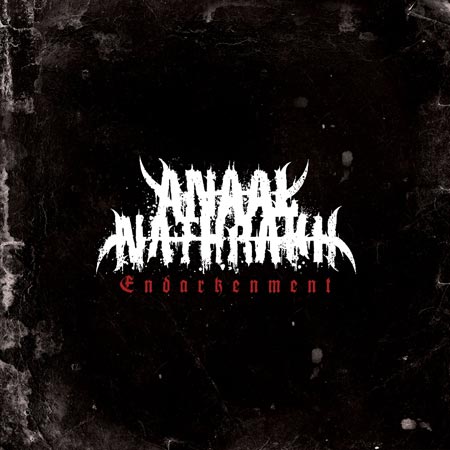 As always, it is a deep album. The perspective of the lyrical content is inspired by the world around us and current life experiences and observations.

Hunt says: “Personally, I feel more cynical, more bitter, with a greater sense that the world is fucked and is continually re-fucked by people who have no idea what they are doing.”

But, thankfully, Anaal at least are in control of their music and if the world as it stands brings about music of this calibre, then that is some compensation, at least.

The title stands as the opposite of the Enlightenment, a movement that went against superstition and ignorance.

Writing in the album’s liner notes, Dave says: “There has been, and continues to be, increasingly widespread rejection of Enlightenment-style values such as rationalism, scepticism, the rejection of faith in favour of judgements dependent on empirically verifiable phenomena and so on.”

Hunt’s lyrics explore a diverse range of subject areas and look in often uncomfortable directions. The track ‘Singularity’ not only looks at the concept of the singularity itself, the anticipated point at which artificial intelligence will overtake human intelligence, but its relationship to human decadence and their destructive nature.

Hunts tells us: “This itself can be seen as a form of decadence, since it represents a culture producing an event which consumes that culture.

“A parallel is drawn to a growing sense that we live in an essentially feudal society – what happens to the world is ever more determined by the desires and whims of a small number of specific powerful individuals.

“A species which does not know what it itself even is at the most fundamental level, which has created a society which functions in ways it cannot control, is making itself obsolete via the will of a tiny number of specific powerful individuals.

“Wonderful. What could go wrong?”

‘Feeding The Death Machine’ was penned on the day of the 75th anniversary of the liberation of Auschwitz, after Hunt heard an interview with a prisoner who survived simply because she could play the cello.

He writes: “Drawing on Jens Bjørneboe’s devastating technique of horrifying the reader precisely by mentioning incomprehensibly horrific events in an apparently matter of fact style and without touching upon the actual horror, this text concentrates on the role of perhaps the most contemptible figure of all – the craven, self-excusing bureaucrat.”

Dave writes: “The text here is taken from the Requiem Mass (in this instance, we were inspired by Verdi’s setting of the mass).

“Given the album’s theme of endarkenment, this track is intended as a mirror of Nietzsche’s madman singing a ‘Requiem aeternam deo’ following his realisation of the death of God.

“Since that symbolised the advent of enlightenment, a new requiem, this time for us, seems appropriate as society turns towards endarkenment.”

The whole album sounds, from the opener ‘Endarkenment’ all the way through to ‘Requiem’, so brutal and driving, with layer upon layer of riffing, maniacal drumming, soaring leadwork and tight melodic bursts.

The range of voices Dave is able to employ are many. I’ve lost count. Screams, growls, angry shouts, vitriolic hissing, all the way up to an almost operatic clean vocal delivery.

The tightness and leanness of the sound is astounding. Not a note is wasted or unnecessary and the ability to put so much variance into such chaos and keep it controlled is astounding.

Since their 2007 ‘Hell is empty ……’ release, I’ve repeatedly found myself saying “Holy hell that’s fantastic – they’ll never top that album” and each time since they have.

Everything fully came together at that point and ever since they have just honed and sharpened into something that is just more magnificent than the last.

We are now at the point where the music for me has become emotive and uplifting.

It’s left me a little lost for words, it’s that good……

A little fun fact about the album: The music was tracked entirely in multi-instrumentalist Mick Kenney’s studio in Southern California.

‘Endarkenment’ is brutal, but still hugely accessible, with a powerful message.

If you are prepared to hear it, or if you just want it to sear the flesh from your face, either way, it is an exceptional listen.

It is their best to date…. Until the next album that is.

Corey Taylor / 'CFMT' providing relief against the angst of the World