One of the UK’s finest Black Metal bands, in my opinion, Necronautical, are set to unleash their fourth album, Slain In The Spirit, and as the title suggests, the themes look at death from a philosophical point of view, dealing with altered states of consciousness.

“The album title, Slain In The Spirit, comes from the idea of how, in the Evangelical Church system, people would become so overcome by the power of spirituality that they would talk in tongues,” Naut says. “It’s the idea of being overcome by something and put into a different set of reality. Cults and Aleister Crowley were another one of the inspirations in how he would try and induce spiritual experiences in his followers or disciples. Whether through atrocious means like drugs or desperate deprivation, ritual magic was still done to create altered states of consciousness. We definitely looked at various forms of mysticism in the lyrics.”

There has been a gradual progression in Necronautical’s sound since their debut, 2014’s Black Sea Misanthropy, a fairly straightforward Blackened affair. “What we’re doing now is more of a fusion between Black Metal and Death Metal,” Naut says, “with progressive and symphonic elements.”

This progression developed noticeably in 2016’s The Endurance at Night and was demonstrated superbly on 2019’s Apotheosis, a hugely impactful album for me and which achieved, in my opinion, the pinnacle of musical excellence. Apotheosis is still at the top of my album playlists, so these last few months, I have been looking forward to Slain In The Spirit with great anticipation since the announcement of its impending arrival.

Slain In The Spirit is more grandiose than its predecessors, even moving the artwork away from the usual monochrome design favouring something with a little more colour and an eerie, mystical design. 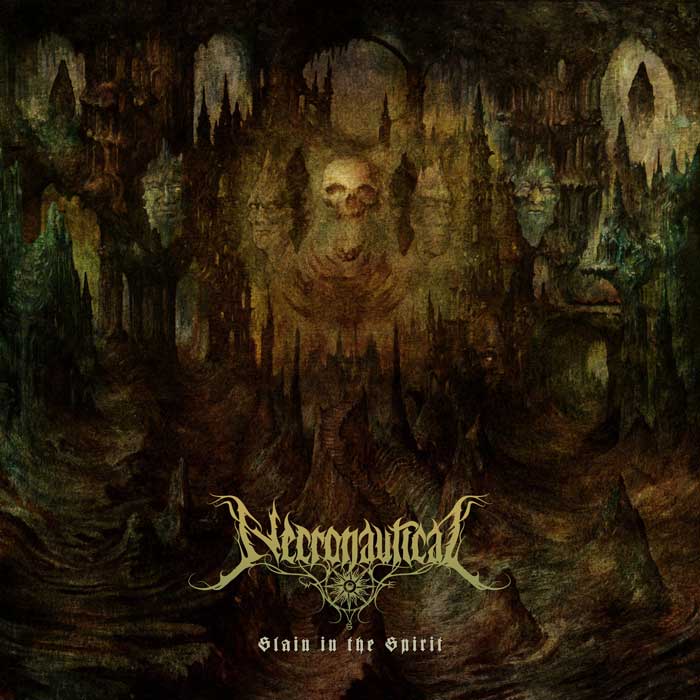 As it opens, Ritual and Recursion’s initial impact makes quite a statement, a surge of noise, then straight into a huge wave of riffs, drums and symphonics, which repeats, punctuated with bursts of deep but acerbic vocals. At this point, I couldn’t imagine the sound could be more intense or full-on, but at the two-minute mark, a wave of female operatic vocals arrive, courtesy of soprano Victoria Harley, powerfully knocking me off my metaphorical feet, and you can look forward to more input from her across the album.

No impact is lost with the arrival of Occult Ecstatic Indoctrination, massively atmospheric thanks to those symphonics, punctuated with ear stabbing squeals, that are necessary but harsh, there is a dark melody coursing beneath along with old school style proggy keyboards which pick up on that, which I love, and the leadwork soars repeatedly and majestically up out of the musical maelstrom.

The title track, Slain In The Spirit, is awash with dark riffing delivered at a galloping pace, packed with hugely emotive symphonics and classical choral work and equally emotive soaring leadwork. All of which makes this a powerful piece that leaves the hair standing on the back of the neck and sends a shiver down the spine.

It’s straight in with waves of keyboard work and symphonics as Hypnagogia opens with the acidic vocals cutting through, a dramatic undercurrent of punchy blackened riffing and midway the soprano and tenor vocals course majestically over the top, impressive!!

The distant sound of searing strings heralds Pure Consciousness Event, and distant rumblings and thunderous crashes phase into a sharp repeat melody which softens as the layering of riffs develop around it. Along with a chugging undercurrent that drives it forward, this is punctuated by the twin vocals. Midway there is a dramatic drop to almost silence, elevating back to a slower, more darkly reflective and emotive pace briefly before the return of the melody and its accompanying dark undercurrent softened to the close with subtle symphonics and distant operatic “Ahhs”. A very powerful and moving listen.

The next track, Necropsychonautics, has an exciting inspiration behind it. It looks at the idea of death causing a psychedelic effect on the brain. “Supposedly, when you’re dying, you experience a hallucination. I believe there’s a release of DMT into your brain,” Naut says. “So that song is supposed to encapsulate that abstract experience of dying and reality-altering as it happens. It’s asking the question of whether that is where people’s perception of the afterlife, or walking into the light, comes from.”

It is a fascinating concept with a sound that matches the idea, stuffed to the brim again with dark, ominous riffs that ebb and fall in waves, operatic elements, deep vocals paired with higher delivery, and an ominous melody wending its way through, powerful and engaging.

Contorting In Perpetuity is a dark majestic driver, carefully embellished by symphonic and tenor elements, paring back to a haunting mood enabling the leadwork to soar out from its midst before resuming the dark driving style, superb.

Death Magick Triumphant is haunting to open, developing into, initially, an intriguingly dark symphonic plodder that develops a fascinatingly meandering style with surprises at every twist to the sound, a bold burst of leadwork and clean vocals and soprano elements intermingled with the acerbic blackened vocals.

The album closes on a cover of Disciple, from Slayer’s 2001 album God Hates Us All, and I do like this interpretation. Necronautical hasn’t been afraid to be bold with this classic track. It’s thrashy but dark, with less in your face focus on the vocals than the original, with instead a symphonic element which adds to their version’s dark and somewhat sophisticated, sinister air.

So ultimately, how does Slain In The Spirit compare to Apotheosis and the other previous albums?

It’s certainly more ambitious than all its predecessors, but then Necronautical have always pushed themselves further with each subsequent release.

It’s definitely an impressive and enjoyable listen. It won’t knock Apotheosis off my playlist, but I think it will join it as another permanent addition.

Slain In The Spirit is available to pre-order at necronautical.bandcamp.com

Bloodstock 2021 / Conan "excited to get back playing" 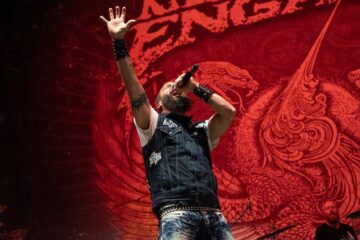