It’s here, it’s true, it’s real. We are standing in the hallowed ground of Bloodstock, with freshly glittered nails, our entrance has been secured, and the heart in mouth feeling of the past few weeks caused by the pandemic uncertainty can finally start to abate. “Will it happen?”, has thankfully been replaced by “let’s do this.”

There’s even sunshine instead of the biblical squalls we have been used to, and the forecast is looking good too. Never mind the skies though, all the action is down here on the ground, and the air is ringing with the sweet and brutal sound of Metal.

We’ll be bringing you all of the news and the best action photos right through until Sunday night with the mighty Judas Priest, who will extend their headline set on Sunday to two hours to celebrate 20 years of Bloodstock and 50 Heavy Metal Years

The festival kicked off yesterday evening with a warm-up day. At the appointed hour, air raid sirens rang out, and the Bloodstock faithful hurled themselves through the gates with horns aloft.

Anakim were the first band on the Sophie stage, the Dorset Death Metallers fizzing with energy and packing in the layers of sounds.

Ward XVI impressed with their theatricality, the full show an amalgamation of gothic and horror tropes which didn’t feel contrived and set a mood of danger and intensity, making sure the adrenaline was pumping.

Onslaught as headliners were red hot, mainly due to bringing enough pyro to burn your face off, so much so that the pit was cleared as it was way too dangerous to take photos. The veterans showed no sign of slowing down, maintaining their influential status. Security reported dragging an astounding 270 revellers over the barrier—no such thing as peaking too soon here.

An outrageously good start for a community that is more than ready to let off steam.

Thursday started brightly. The Ronnie James Dio stage is primed and ready for things to kick off tomorrow, its mighty presence looming benevolently over the early attendees soaking up the bands on the Sophie Lancaster, New Blood and Jagermeister stages.

Fury meant business early doors with a beefed-up classic sound guarantee to blow the space dust out of just-woken eyes. They were a last-minute replacement for Mother Vulture. There has been a lot of changes, unsurprisingly, but the ability of the bands and event organizers to put on a seamless show is legendary.

Ashen Crown gave us our fix of aggressive, dirty growls and melting riffs, pulling a packed crowd despite the early doors. A truly momentous set.

We have the wifi sorted, have our bearings and are now going to check out the BBQ stall and the next batch of bands. Back later with the evening update – make sure you check out Bloodstock 2021 at MetalTalk for all you need to know. 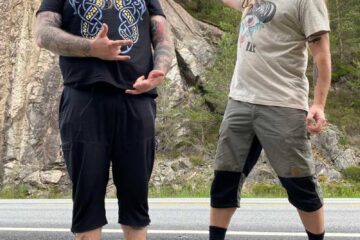