It’s a beautiful summer evening, and where could be better than a field in Derbyshire with thousands of Metallers. We are fortified by a pig in a bun and hanging out with the crowds.

It’s been too long, but it also feels like we’ve never been away. The main site is pretty full. It doesn’t feel like a warm-up day at all. There’s so much going on, with great traders such as Old Sarum tattoos who are filling up their bookings rapidly.

They’re over in the place that’s usually filled by Motley Brew, who are much missed this year. The legendary Bob Moon is here, so all badge and patch needs are covered, especially with a Patch Amnesty here, too, trading patches to raise money for good causes.

Another familiar and welcome face here is Sir Krusher of Joule, who introduced King Witch. Their heady blend of proggy Metal was varied and full of dynamism, with the rich deep voice of Laura Donnelly commanding attention.

The Crawling are billed as Doom Death from Northern Ireland, so that was a cheery proposition. It was intense and severe and threatened to make the sunset early. You can read our interview with The Crawling here.

The New Blood Stage is always worth the walk to the far corner of the field. Bands on this stage have come through the Metal 2 The Masses competition ranks, and many started here and have been promoted to the larger stages in subsequent years. It’s an awesome opportunity to catch a possible future classic band at their genesis. Slave Steel were powerful and dramatic, and Pemphigoid put on a great show.

Likewise, the Jagermeister stage, easily accessible right in the middle but often overlooked, can contain some real gems. Ghosts of Men really impressed with their hook-laden high energy. Earlier in the day, Milliner had tried to blast the roof off with their bone-crushing wall of sound.

The Punk Rock Factory replaced the billed Hacktivist. An unassuming-looking quartet, there was nothing standard about their set. As a concept, it’s not that sophisticated – DIY punk versions of fairly well-known songs, but the sheer force of personality and the somewhat eclectic mix was a complete winner.

A circle pit for a Corrs song, anyone? What about a punk version of the Pokémon song? A packed tent with the overflow leading back past the fairground gave it the thumbs up, thousands of Metallers jumping up and down singing every word.

With Bloodstock becoming party central, we are signing off for the evening and going over to catch Lawnmower Deth to end our night, ready for a day packed with Metal-coated thrills tomorrow. 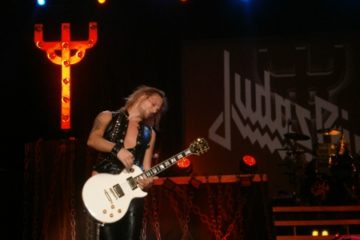