Bloodstock 2021 is a go, and The Crawling, the Doom/Death Metal band from Northern Ireland, are ready and willing to hit The Sophie Lancaster stage on Thursday. MetalTalk spoke with Andy Clarke to find out how the band are preparing for this epic week of Heavy Metal entertainment.

After a torrid couple of years, it must feel pretty damn great to be able to get out and play again. “It’s an unreal feeling,” says Andy, “part of me still can’t believe it’s actually going to happen. It’s a constant flow of emotions; anxiety, excitement, fear, nerves. It’s been a constant rotation since it was announced. This is the longest we’ve gone without a show, and I can’t wait to get back on the stage. I really missed it.”

Like all bands, COVID-19 killed The Crawling and “totally fucked all our plans.” 2019 was quite a breakthrough year for the band. “2020 was shaping up for more of the same, plus some bigger festivals,” Andy says. “The plan was to gig the setlist we had and write for the new album in between shows. We got one song completed before the lockdown hit, and then the whole thing got taken out at the knees.”

That band mentally survived better than some. “We found ways to amuse ourselves,” Andy says, “get some The Crawling stuff out there, learned to record and produce remotely, made a short documentary and even managed to release a single, including a cover song, [Play Dead, a Bjork cover] which we’ve never done before. I mean, I’d rather have done shows and stuck with the original plan, but we still managed to keep at it. A lot of bands really fell apart over the last year, which has been sad to see. ”

The buildup to Bloodstock this year has been a strange one, with the worry of Government cancellation in many peoples thoughts. “To be honest, I suffered a bit with fear ruling my mind concerning Bloodstock,” Andy says. “I didn’t ‘want’ to get excited, in case it was cancelled again – it was such a blow for 2020, and I really couldn’t be arsed with that emotional turmoil again. However, over the last few months, it became clear we’re gonna get away with it, so we had to go up a gear and really sort ourselves out. We have been rehearsing like madmen; we’ve never worked this hard for a show. As of now, we are super ready and super excited. We’re even playing a brand new song we just finished – we’re so pumped about it!”

Ready for The Sophie Lancaster stage on Thursday, “Ah, the coveted Sophie stage,” it promises to be a special moment for The Crawling, who have played the festival before. “It’s going to be EPIC,” Andy says. “We played Bloodstock in 2016 and have been fortunate to play festivals in other countries, which is always an incredible experience. We’ve learned a lot of the last six years playing those shows, and it all adds up. As musicians, we have learned the importance of getting gear well serviced, having backup plans for failures, being properly rehearsed, getting fit(ter), and resting before the show, how to interact with the crowd. Honestly, the biggest thing we’ve learned is being as prepared as possible, so you can absorb every moment of the performance. There is nothing more exhilarating than playing at a festival. The crowds are bigger. The stage is bigger, and the sound is bigger; you HAVE to make sure you soak all that shit up. Those memories are forever. I love it.”

Preparing a set for a festival is often a tricky business. “We always have issues as our songs can be lengthy,” Andy says, “so sticking to a rigid timeslot can be tricky. We could squeeze more songs into our 45-minute slot, but having tried a few goes, we decided to cut it back a bit and allow the set to breathe a bit more, focusing on the atmosphere we want to create. We are also going to play a completely new track, literally finished a few weeks ago. We wanted to push ourselves and give something to Bloodstock that only those present will get. It’s kinda terrifying, but I’m genuinely excited to play a new track – it’s been ages.”

The band have already released two albums and an EP, and there is a new record on the horizon. “The new album is progressing,” Andy says, “but the lockdown really fucked up the writing process, and then with Bloodstock confirmed, we had to work very hard to make sure we were gig ready. Once home, we’ll get back to writing and sort plans for release. I imagine it’ll be early 2022 for the release of the next album.” 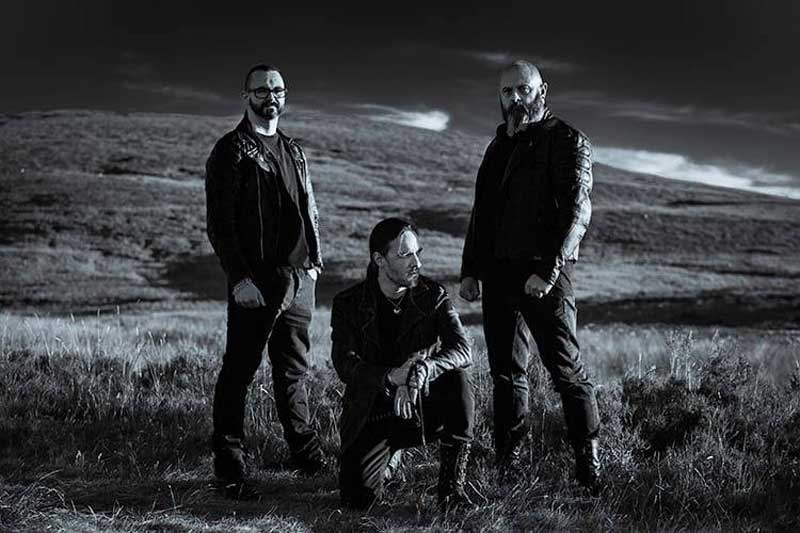 As for inspiration, Andy says he always looks to the ‘Peaceville years’ of the ’90s. “My Dying Bride, Paradise Lost, Anathema, Katatonia are some of my favourite bands,” he says, “and without a doubt influence my writing. That said, I’m also a big Mötley Crüe, Whitesnake, Skid Row, and glam rock fan, and I do love a good chorus. We’re kind of like My Dying Bride with choruses,” he laughs.

As for Bloodstock 2021, “hopefully it all goes as planned,” the rest of the year is looking a little unclear, although the band have tours with Winterfylleth and Gaerea planned for September. After that, they tell us it’s back to writing, and booking shows as and when the live circuit truly switches back on.

You can find out more about The Crawling on their BandCamp page, thecrawlingband.bandcamp.com

Due to the UK ‘pingdemic’, personal circumstances may change, so you can sell or purchase tickets at the official re-sale site, www.seetickets.com/rd/event/bloodstock/catton-park/1417975

Bloodstock has implemented a number of safety measures around the arena and campsite. They also require proof of a negative NHS approved Lateral Flow Test taken within 36 hours of festival arrival.

These tests can be ordered online free of charge.

Full details can be found at www.bloodstock.uk.com/pages/coronavirus

Limited day tickets can be purchased from at the ticket store. Wednesday remains exclusively for weekend ticket holders. VIP and campervan tickets for 2021 are sold out.