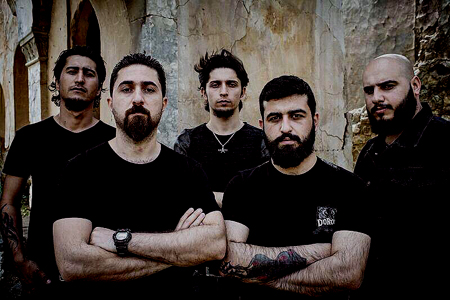 So, it’s 2007 and cousins Murad and Rebeen get together with a couple of friends from college and start a band, firstly playing thrash/death covers before beginning to write their own material.

“As enough of times passed,
As our efforts turned into musical words,
As phantoms breed talent and vital,
Therefore the first chapter attained arrival,
There is the outcome of true struggle we held beyond,
The first product of Dark Phantom from Iraq,
It’s the Nation Of Dogs (Album)”

Nothing unusual in that you might think, but this isn’t Birmingham, Dallas or even Lahore, this is Kirkuk in northern Iraq and the shit is about to hit the fan, big time.

As the band say on their Bandcamp page, they went into “hibernation”, keeping their heads down and with good reason. Kirkuk is right on one of the main “Fault Lines” in the war raging inside Iraq and Syria and as it is within the Kurdish region. That also means that the Pashmirge (Kurdish Militia) are also heavily involved in the fighting, alongside the Shia Militia, Isis, and the official Iraqi Army.

In 2008 the band regrouped and started rehearsing and writing and perfecting their style and recording technique, but during the next few years there was an ever present danger of being caught playing inside an area where extremism was rife.

It wasn’t really until 2011 that they put on their first gig in Kirkuk, in the middle of an album called ‘Beta’. To their surprise, despite threats from sympathisers of the anti-western music sentiment in place, and indeed actual laws, a reasonable crowd turned up to watch this.

2012 saw a demand for a second gig and for ‘Beta’ to be finished, but now the band faced threats to both their social media presence as well as themselves. They struggled for the next couple of years, going back into “hibernation”.

That the Pashmirge has strengthened their grip on the city over that past couple of years has meant that things have settled down enough to bring a better degree of normality to the area and thus the band started playing gigs again and perfecting their material to a point where an album has had worldwide release, albeit via Bandcamp.

This chaotic situation naturally has a huge influence on their lyrical style, and ‘Nation Of Dogs’ is the result. As the band told us: “We talk about our life in Iraq with the bad policy and corruptions, and also about the religion – criminal that they kill and slay people in the name of religion.” 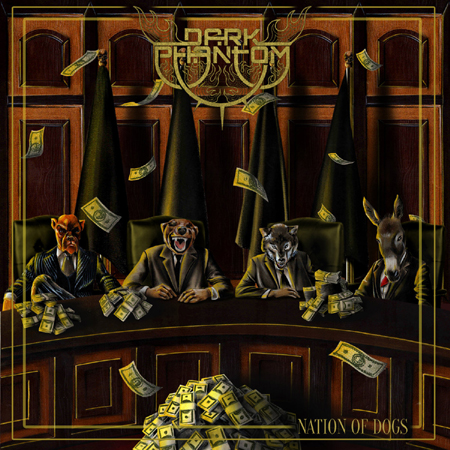 Those two themes come across strongly in the album’s lyrics, indeed in ‘Confess’ the line “Dogs chewing a bone” sets the tone of this – the various forces, military, political AND religious are likened to dogs fighting over a bone and the bone in question is described in ‘States Of War’: “Lakes of oil, dunes of corpses, TREES OF DOLLARS FUEL THE FIRE.”

There is also plenty of Anti-Jihadi statements, such as this one from ‘Judgement Call’: “Jihad – the world grows poorer, cheaper day by day.”

So what about gigs? About getting this music out there live?

“We have played a few gigs though it’s very hard to do here. We have played in three major cities, Sulaymaniyah, Kirkuk and Erbil. Festival wise, no, there is no such thing in Iraq for there are very few bands out here and no we have never played outside of Iraq. That’s like a dream to us.

“There is no space to play music as you want, but we still try and do our best. I think you saw on our Facebook page our show in the cafe? There is just some places like this with small audiences. Yes there were two channels from Kurdish TV covering this as a news item and when they shared it on their social media page some people commented under the video, saying we were Satanic. They don’t know what we are talking about.”

Back to the album and after the very short, middle-Eastern inspired intro, ‘Dark Ages’, the offering roars into life with ‘New Gospel’, a very thrash track with some brilliant harmonies working the solo.

The title track, ‘Nation Of Dogs’, follows and it’s a staccato riffed powerhouse full of catchy hooks and pace changes and the mix of clean and growled vocals that characterises many of the tracks that follow give a distinct style.

The rest of the album follows apace with little tricks to hook the interest. ‘Judgement Call’ starts very melodically with clean vocals but just as you think you are in for a ballad, off it goes into full on thrash territory and it’s the same with ‘O! Holocaust’. Tracks like ‘Unholy Alliance’ switch from fast and furious to slow and pounding.

As the band told us about their style: “Our style of playing changed drastically when Mir and Mahmood joined the band. We collected all that we like individually and came up with our sound and we call it Thrash-Death Metal as it’s like a mixture of both genres. As for influences, we are greatly influenced by Metallica, Slayer and Lamb Of God.”

And yes, you can hear the influences in this album, but scattered throughout as little hints. Dark Phantom are defiantly their own band.

This album was home produced but that doesn’t detract from the quality at all and it’s available through the band’s Bandcamp page at a cost of $4.99. I’m not saying you should buy this because of where it comes from, I’m saying you should buy it because it is good. Three and a half beers worth of good to be exact.

Click here for Dark Phantom’s Bandcamp page where you listen to every track from the album and buy a copy for an extremely modest $4.99 which goes an awful long way in Iraq. These guys deserve your support for keeping Metal alive in a country where it is dangerous to do that.