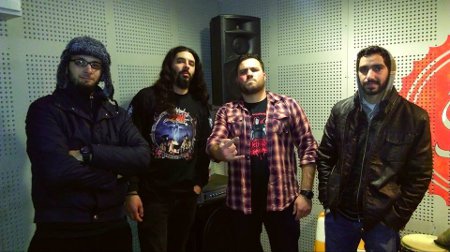 Hailing from Amman, Jordan, thrashers Exile are one of the rising stars of Middle-Eastern Metal.

Formed in 2008 by guitarist Nader and bassist Hassan, they were joined by drummer Tayyem and produced a well received demo, ‘Dead Thrashers Rising’, which was followed up in 2012 with ‘Suspended Society’.

Hassan soon left and was replaced by Ibrahim Al-Kateeb, and second guitarist Sultan Sawalha who joined in January 2015.

Hi Nader. Please can you introduce the band to us.

“Hello, we are Exile, a thrash Metal band out of Amman, Jordan. I am Nader, I play guitar and sing vocals for the band, Ibrahim plays the bass, Tayyem on drums and Sultan on guitars.”

The band is very proud of the fact that it plays “old school” thrash. Who has influenced you the most?

“We are influenced by bands like Kreator, Testament, King Diamond, Death, Xentrix and Slammer.”

Growing up, was there much of a Metal scene in Amman?

“No, there wasn’t much of a Metal scene at all but we still managed to play local gigs and record our album when we could.” 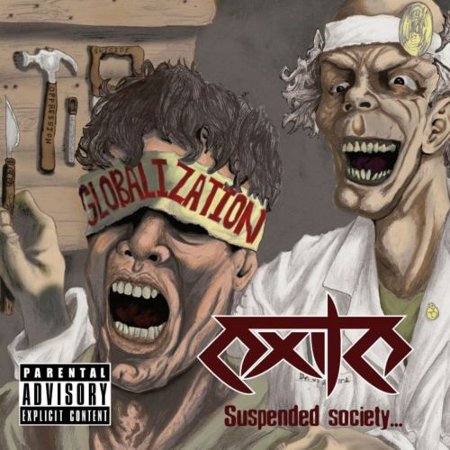 How well is the rock/Metal scene in Jordan supported by the local/national media?

“It has improved, rock music is mostly supported more than Metal music. There are a lot of local rock bands that play regularly but hardly any Metal bands.”

I notice that you have played Egypt’s Metal Blast Festival a few times now. What is it like to play there? Have you played internationally anywhere else?

“It was a great experience and we put on a great show. We have also played in Turkey at a Metal gig. We had a great time and loved the audience and would love to play again.”

As a nation, Jordan is caught in one of the most volatile regions in the world at the moment; does this influence your songwriting? Have you concerns that the unrest may spread to Jordan and affect you? As an example, Syrian thrashers Anarchadia fled from Damascus to Beruit to finish their debut album ‘Let Us All Unite’ two years ago.

“Our lyrics are mostly political and are influenced mainly by the problems that are occurring around the middle eastern region. They give us inspiration for writing not only the lyrics but the riffs as well. And in the future we will continue to write based on what effects our personal lives regardless if its political, physiological or mental state of mind.”

You have recently added a second guitarist (Sultan). What will he bring to the band in terms of songwriting/sound?

“It will help with the creative process as well expanding our overall sound as a band. Thank you for your time, we Exile appreciate the time you have given us for this interview. Stay Metal.”

So, if you haven’t caught up with the band yet, you can do no worse than get a copy of their 2012 release, ‘Suspended Society’. It is certainly an album for those who like their thrash punchy, political and firmly rooted musically in a style reminiscent of the mid 80s beginning of the genre.

From the opening track, you get the idea – punchy riffs over a gritty vocal style, with lyrical themes covering discrimination, equality, the Israel issue (The band members are of Palestinian origin, and the band’s name refers to their families’ relocation from their homeland,) and other such political themes.

Just as Karachi’s Tahabi are lyrically influenced by Pakistan’s troubles, so Exile are influenced by the problems in their region.

But musically, the band are definitely rooted well into that eighties raw feel of those early thrash albums that so defined the genre. This is not to say it is a step backwards at all, rather they make it all seem tresh again.

Surprises do crop up within the albums – take the bass solo that forms track 5 (W.T.F), that suddenly comes in again over the next track, title track ‘Suspended Society’ – mutilated variety. Small things like that do make their sound less formulaic.

Indeed, some of the riffs here (such as the beginning of ‘Iron Hands’ have that epic, anthem-like quality that makes you remember them. This is helped by having good production and mixing so the sound is very balanced. The one thing I would say is that a second guitarist would give them more depth to the sound, but they now have one!

The long and short is that ‘Suspended Society’ is worth getting your hands on, if you like your thrash raw, “old school” and couched in the language of protest.

Previous articleMiddle Eastern Metal / Nour, from Anarchadia, speaks
Next articleMetal Is Alive In Iraq With Dark Phantom Playing In A Nation Of Dogs