“The Spirit that guides you, follow it through
To the spirit inside you always be true”

These words from ‘The Spirit’ and heard in tonight’s encore sum up perfectly Magnum’s success, longevity and ability to hold an audience spellbound. 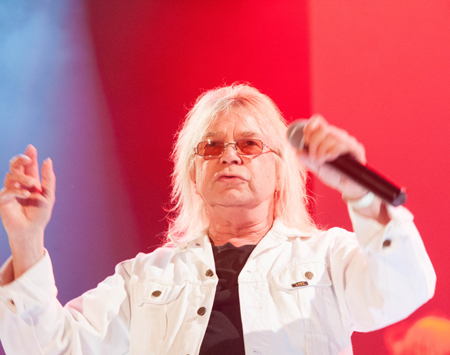 Their live show isn’t always consistently brilliant, but no surprise there; I don’t know of a single band that judges performance and setlist perfectly every time. However tonight at Islington can definitely be filed under magnificent, with the overall atmosphere and essence lifting the experience to way more than the sum of its parts.

From a strong start with ‘Soldier Of The Line’ the quality did not dip at all; this was one classy set with material taken from across the band’s illustrious career. The new album ‘Sacred Blood ‘Divine’ Lies’ sees the return to a harder edge and is packed full of trademark melodic anthems perfectly in keeping with the rest of the catalogue, and we were treated to four tracks from it tonight.

There were so many highlights in the set it would be futile to go through them all, but this gig showed that Tony Clarkin is a songwriting genius, and the band’s output is astonishingly good, with all eras blending together to produce an array of ambitious numbers, power ballads, fantasy themes, stirring harmonies, out and out rockers and flowing heaviness – as good a collection as you will find anywhere.

Vocalist Bob Catley led us through proceedings, rocking the double denim all in white, with his shoulder length silver hair and tinted glasses giving the appearance of a bohemian, wise spirit guide. 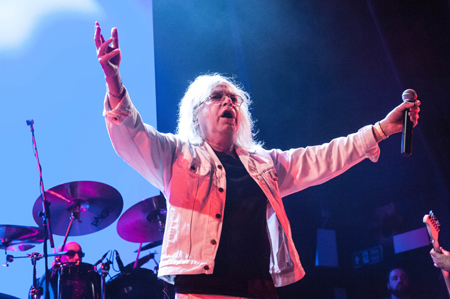 It’s so good to hear a prominent piano at rock gigs and Mark Stanway’s fluid melodies were a treat, such as in the quieter moments of ‘Freedom Day’ from 2011s ‘The Visitation’ leading into the strong riffs of ‘Dance Of The Black Tattoo’ which was breathtakingly good.

The blend of the keyboards with Clarkin’s guitar was spot on as thankfully the temptation to throw everything but the kitchen sink into the arrangements was resisted – everyone had the space to shine while the soundscape remained immense. 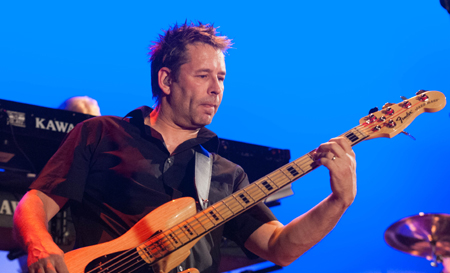 Drummer Harry James and bass player Al Barrow gave the songs just the right amount of heft – by which I mean I lot was required, and a lot was provided – exquisitely satisfying.

The songs chosen for tonight’s set were more than good enough to hold attention without the need for elaborate staging or light show – merely a series of different coloured backdrops was all that was needed. 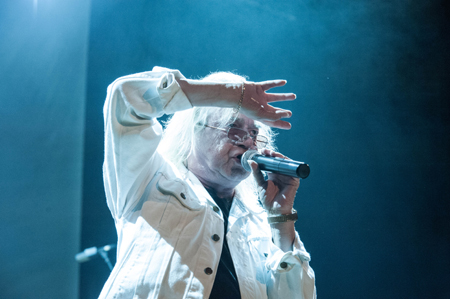 New song ‘Your Dreams Won’t Die’ was an emotional ballad with captivating lyrics and very very striking. This ought to be a Eurovision winner – I’m not being sarcastic here, I bloody love Eurovision, especially since it gained a taste for peppering Symphonic Metal among the cheesy offerings, and I couldn’t care less which country wins it, I just enjoy the spectacle. Anyway I digress – there was more than enough splendour right here in Islington, and more concise and enjoyable.

With more seguing of old and new, ‘All England’s Eyes’ was bookended with ‘Princess In Rags (The Cult)’, verifying once more that this setlist was among the most coherent I have seen from the band. 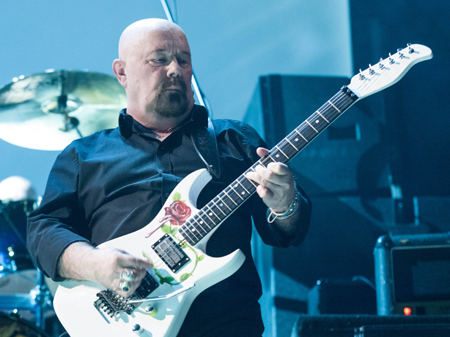 With ‘Vigilante’ ending the main set, it would have been pretty damn satisfying if the show had finished there – but there was more to come. For the encore, the band returned, sat on the keyboard and drum risers and started the cascading acoustic introduction before Catley, now changed into a blue denim jacket, simply but powerfully sang through the lyrics to the aforementioned ‘The Spirit’. With a mass sing-along happening on the floor the atmosphere was nothing short of magical.

And of course finishing with the classic ‘Kingdom Of Madness’ – a title that could be a representation for the waking reality that we had to shortly return to – we were brought back down to earth with a sense of euphoria. As I headed off back into the night with a smile that little bit brighter, Magnum had done everything they needed to do in the previous couple of hours – not a single complaint from me. 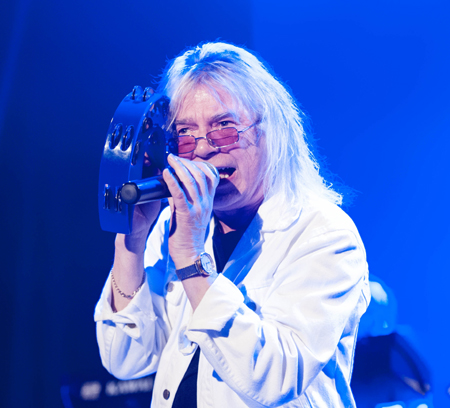 The Spirit
Kingdom Of Madness