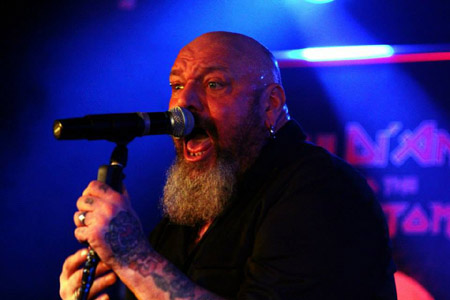 Paul, who turned 58 today, Tuesday 17th May 2016, was hospitalized on the afternoon of Thursday 12th May 2016 in England and his eight scheduled Brazilian tour dates for June were cancelled. You can read the original announcement here and here’s the statement from AoC’s official Facebook page.

“Dear fans, friends and family of the A.o.C.!

“We want to give you a short update about Paul’s physical situation.

“At the moment Paul has got a shadow on his chest and lungs and a problem with his lymph nodes.

“Moreover he has a total arthritic break down with his legs.

“He will stay in hospital for a long period of time to get everything checked!

“We will keep you updated as soon as we’ve got more detailed informations.

Paul was booked to play with Blaze Bayley on June 12th at Tropical Butantan in São Paulo, the first time the two singers would have performed together in Brazil but Blog n Roll Produções made a statement about the situation last Thursday and said that the singer’s condition is “extremely delicate” and he is going through tests to decide what treatment he should have.

Fans who have already purchased tickets are being advised to request a refund with Ticket Brazil at ticketbrasil.com.br.

According to Paul’s Wikipedia page, in June 2012 he was given the Freedom of the City of Bariloche in Argentina for charitable work carried out several years ago. This was almost exactly a year since he was released from prison after serving two months of a nine month sentence for benefit fraud.

MetalTalk wishes Paul all the best and hope he makes a return to music as soon as possible.