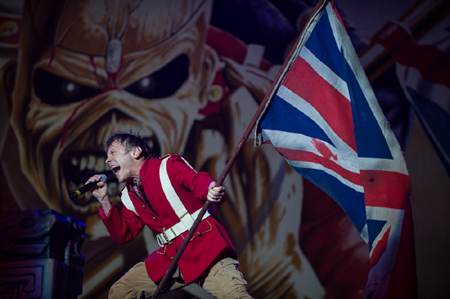 Iron Maiden have released an official performance video for ‘Death Or Glory’ from their latest album ‘The Book Of Souls’ which you can see in full below.

Dave Murray spoke to Music Radar about the songwriting process for ‘The Book Of Souls’ and said: “On previous albums we’ve usually gone into a rehearsal room for maybe a couple of weeks and maybe have four or five songs under our belts. Then we’d go into the studio and start recording and the rest of the material would be written while we were there. But this time we went in there with a blank page and a bunch of ideas.

“It was a really fun experience because it keeps you on your toes. You have to be really sharp. We’re scribbling guitar chords down, melodies and harmonies, changes, basically we were flying by the seat of our pants because we never knew what was coming next. But it was wonderful how things kept flowing.”

Adrian Smith said that he and Bruce Dickinson played an active part in songwriting proceedings. Adrian told Total Guitar: “This time I did a couple of things with Bruce too. I thought I’d try writing shorter songs, like ‘Two Minutes To Midnight’ and ‘Can I Play With Madness’, with just Bruce and I. We haven’t done that since I’ve been back in the band.

“Maybe with ‘Wickerman’ we did it. So that was different. He came over before we started recording and we wrote ‘Speed Of Light’ and ‘Death Or Glory’.”

And here’s the official ‘Death Or Glory’ video.

Maiden have completed the non-European legs of their Book Of Souls World Tour and landed in Dortmund last week. They played The Waldbuehne, Berlin on Tuesday night and we have a review of that gig on the way. Ed Force One landed in Zurich yesterday for tonight’s gig in Lucerne and this is our favourite picture from the whole tour so far.

The two aircraft in front of Ed Force One are those of German Führer Angela Merkel and French President François Hollande respectively and this just proves that Heavy Metal is much bigger than any fucking government or world authority.

Far away from the land of our birth, we fly a flag in some foreign isle, we sailed away like our fathers before, these colours don’t run from cold bloody war…

Iron Maiden headline Download Festival on Sunday 12th June. It’s Rammstein on the Friday and Black Sabbath on the Saturday plus literally dozens of the world’s top rock and Metal acts. Tickets are still available and you can get yours by clicking here.