Physician Daniel Baldi was charged on Wednesday (5 September 2012), in Des Moines, Iowa with involuntary manslaughter. It is alleged he over-prescribed narcotic painkillers to his patients, with one of the eight victims being revealed as Slipknot’s Paul Gray.

According to the Des Moines Register, the charging documents claim Baldi “did unintentionally cause the death of Paul Gray by the commission of an act likely to cause death or serious injury, to-wit, continually wrote high-dose prescription narcotics to a known drug addict from 12/27/2005 until his death.”

In reaction to this staggering and shocking news, Slipknot have released an official statement, which reads:

“As the loss of our brother Paul Gray is still very fresh for us in the Slipknot family, this new development has us all in a state of anger and sadness.

“The fact that this person took advantage of our brother’s illness while he was in a position to help others has outraged everyone in our family. We can only hope that justice will be served so this can NEVER happen to anyone else ever again!

“Our thoughts go out to the families of the other victims. We plan to cooperate as much as we possibly can to ensure this tragedy is never repeated, and to make sure this man pays for what he has done.”

Slipknot member Shawn ‘Clown’ Crahan has already spoken about the charges against Baldi, saying on Thursday: “None of it is going to bring back our brother Paul.

“This epidemic of this sort of activity is becoming more and more … evident. It truly is becoming a problem amongst people. And it trickles all the way down to the youth. And awareness needs to be brought about — not only substance abuse but the ability to acquire substances, to get chemicals and the efficiency of it. Hopefully justice will be served.”

Daniel Baldi has entered a not guilty plea to the charges and has been released after posting $16,000 bail.

Baldi was charged in 2012 with ten criminal counts of involuntary manslaughter, but was eventually acquitted in 2014.

In the 2014 criminal trial, Brenna Gary testified that Baldi was prescribing Xanax to her husband, despite knowing of his abuse of the sedative.

“I just knew it was his drug of choice, that he’d struggled with it. So I just wasn’t really sure why he was on it, why he needed it along with the medication he was taking for addiction”

In 201, Baldi’s license to practise medicine was reinstated, with reports he was working as an anesthesiologist in the Des Moines area.

In 2016 the Gray’s lawsuit filed against Baldi and his former employers was almost thrown out, as the defence lawyer successfully argued that Brenna Gary had waited too long to file the case. But the Iowa Supreme Court ruled, later in 2016, that the case could proceed on behalf of the Grays’ daughter, October Gray, who was not yet born when her father died.

In December 2019, Paul Gray’s family obtained a settlement from the health care providers who they blamed for his drug overdose death. The family were to sue Baldi and his former employers, but the case was settled hours before the trial date.

The Gray case was one of several lawsuits filed in the matter.

Ingridi Verardo / Daniela Serafim joins for 'Read Between The Lines' 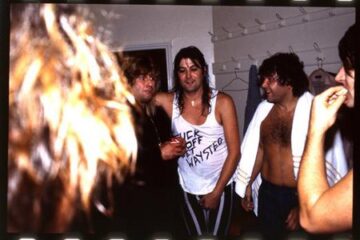