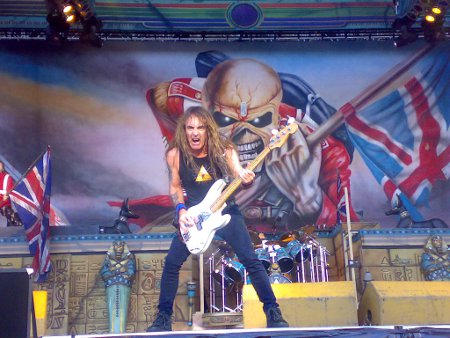 Iron Maiden’s ‘A Matter Of Life And Death’ album has been voted greatest album released in the past ten years by readers of Sweden Rock magazine, the country’s biggest-selling music magazine. The result appeared in the publication’s ten-year-anniversary issue.

Maiden also polled at number two with ‘Dance Of Death’ and last year’s ‘The Final Frontier’ came in at number five.

Maiden bassist and founder Steve Harris said; “Wow, that’s amazing. There have been polls before where we’ve had albums in the top twenty or top ten, but never before top one and two. Three albums in the top five is outrageous.”

The June issue of Sweden Rock Magazine is on sale on June 14th and will carry an exclusive interview with Steve.

Maiden made the following statement regarding upcoming press features on their official site earlier this month. The articles mentioned are all well worth a read.

“As we have been quiet in the press for a while we thought you might like to be aware of some major Maiden articles soon to hit the newsstands here in the UK.

“This is followed on May 19 with an in-depth feature in Record Collector magazine, and on May 25 by Classic Rock magazine’s extensive views on what makes Maiden tick. Also out on May 25 is a Stories Behind The Songs feature in Kerrang, and Metal Hammer’s June 1 issue includes an On The Road piece from Buenos Aires and Santiago.

The band look forward to kicking off the European leg of the tour in Frankfurt on May 28 and coming home to finish the Final Frontier World Tour in the UK towards the end of July.