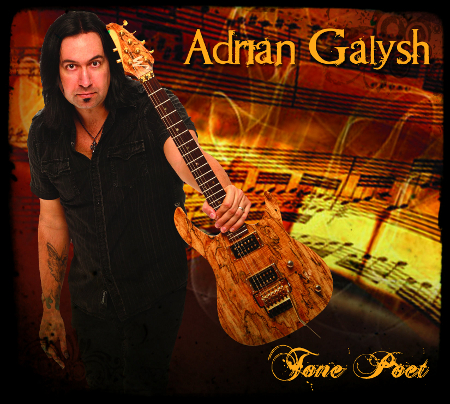 Adrian Galysh is an LA based session guitarist who on top of his axe for hire stuff there and on tour with the likes of Uli Jon Roth also writes and records his own material and ‘Tone Poet’ is his first solo release since 2008.

Mr Galysh cites a whole host of influences and promises that this album will feature vocal rock songs, instrumentals with world music influences and sweeping orchestral works and I have to say he doesn’t disappoint!

Starting with the gentle orchestral strains of ‘Resurrectis’ this album feels like a wander through the musical mind of the man that made it. There are traditional sounding unashamedly old fashioned hard rock songs, there are instrumentals which allow him to show off his chops sometimes on acoustic guitar, sometimes full electric. On top of that there are full blown orchestral pieces which would be comfortably at home on a classical album.

The playing on the album is excellent throughout, the LA axe man turns out to be more about melody than shredding and is ably supported by Philip Bynoe (Steve Vai) on bass and Todd Sucherman(Styx) on drums. Vocals when required are supplied by Mark Boals (Yngwie Malmsteen, Royal Hunt) and he hits all the hard rock notes required although I found his high-pitched, straining style of singing a bit wearying.

The songwriting is solid and there are no tracks I would describe as weak but the different styles on the album take some getting used to. When played as a whole piece it doesn’t really hang together as the styles on each track can be so different it’s hard to remember it’s the same album you’re listening to. I’m using that as a criticism really but I think some people and probably the man himself might quote it as being one of the album’s strengths.

Verdict: This is an album which sets out not to be pigeonholed into a specific genre which may give it marketing issues but it succeeds in being both interesting and enjoyable as well as diverse. It’s remarkably understated for a solo album by a virtuoso guitar player and is full of really nice melodic moments and can be rewarding to repeated listens. If you have wide musical horizons and enjoy tasteful musicianship then ‘Tone Poet’ is definitely worth a listen.