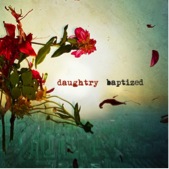 Baptized signals a rebirth for Chris and the band. “I want fans to keep an open mind about it,” he concludes. “The songs are very much what I do lyrically and melodically. I’ve always been a sucker for a great melody. That’s what song-writing is all about. Can people relate to this? Is it real? Is it honest? That’s what everyone should take away. It’s real and authentic. This is where I am right now.”

Daughtry will be coming to the following UK venues in March: