It’s that time of year again when we are inundated with a whole host of Christmas singles, mostly eminently forgettable and a few that should never have been made in the first place. Every so often though a Slade or a Pogues does appear which makes it all seem worthwhile. 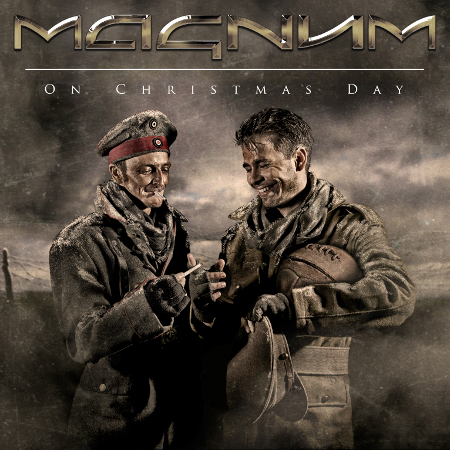 This one most definitely fits into the latter category, although for different reasons. As you will probably know (and if you don’t, I expect a sick note) ‘On Christmas Day’ was originally on the 1994 album ‘Rock Art’ album so it is not a new song, but of course since then the band have had a new lease of life and it is old enough to be new to a lot of people.

But apart from the musical side which I will get to in a minute or three, the song is loaded with more relevance than a beer glass in a pub. If you didn’t know, it is all about how fighting stopped very briefly in 1914, before the nastiness of war continued unabated – a story you are probAB:ly familiar with.

There is probably no event which can cause greater emotion a hundred years later (we know what horrors awaited them) and, not to put too fine a point on things, if you were to pick a songwriter amongst the rock fraternity to do that emotion justice then Tony Clarkin would be likely to appear at the top of the list every time.

The background for this release and the artwork I will leave to two far more qualified gentlemen to explain:

Guitarist and songwriter Tony Clarkin reveals how it all happened: “It was Olly Hahn at SPV/Steamhammer who said that he had a great idea and could I write a Christmas song? I replied we had already done that in the past and told him about ‘On Christmas Day’ and that it was on the ‘Rock Art’ album, so if he wanted to check that out to see if it was suitable, because it’s not the normal Christmas song that people would expect.

“I had not heard it myself for a long, long time. We were in Germany at the time and so we all sat round the computer to listen to the track; we were all impressed, and I was really looking forward to re-doing it. That’s really the story of how it came about; but I also thought ‘Born To Be King’ could also fit with ‘On Christmas Day’ as a strong B side for the whole package!”

Bass player Alan Barrow, who created the single’s artwork, explains that the idea for the cover “was based on some documented facts about the men in the trenches around Christmas in 1914. Carol singing was said to have been heard going back and forth between the trenches from both sides.

Some documents state that on Christmas day a small amount of soldiers ventured in to ‘no mans land’ where they exchanged food, cigarettes and souvenirs. There are some reports that a game of football was also played.”

So there you have the background to it. It is worth mentioning again that instead of just re-issuing a past song, they actually re-recorded it. So what does it all sound like?

First to the main dish on the menu ‘On Christmas Day’. The original version was a fraction over seven minutes long and this one is too. It is a re-recording, not a re-arrangement so that would be expected. There is actually on this a radio edit version of the single as well, but we will get to that.

Starting off and setting the mood perfectly, rocky but melancholy, clever second guitar bursts thrown in, the feeling is there even before Bob sings “Not a tree on the skyline”. It is a brief thirty second intro but stacked full of emotion and gravitas, Harry James’ druMS: starting it off modestly, Mark Stanway’s keys adding more of the sentiment, Al Barrow’s bass restrained and rhythmic.

And then Bob comes in, his voice filled with equal servings of depth and passion as Tony’s songwriting, the peRF:ect foil. Simply put, with a song like this I doubt there is a better combination AB:le to put across what is in their souls.

The rockiness dies down for the verses, great thoughtful bass line backing the vocals, keyboards simple but effective chords before Clarkin piles in with more of his sorrowful six strings. The chorus is a very anthemic, hand waving affair in the best traditions, before TC pulls it along to the next verse.

A very clever song structure is actually one of the stand out points in this epic (and another bonus is you don’t all have to hear me lecture about the importance of it as happens far too often). This isn’t one of your standard verse – chorus – repeat – bridge – solo concoctions, far from it and that just notches it up in the aural stakes. After our second helping of the chorus, Clarkin lets rip briefly, rockin and a rollin, rising fretwork, but never losing the feel or the subdued overtone.

Another section of the song arrives, almost a classic mid section but a twist which comes with an up tempo switch half way through… before it retreats again (unfortunately something neither of the sides in the Great War considered).

Chorus, again with a twist, leading to the crescendo and the final regretful chord. Stirring stuff, poignant and yet in a strange way uplifting, a fitting way to close the centenary celebrations of the conflict’s start.

If you want comparisons with the original, then it is mostly down to production where a stirling job has been done, crisper vocals, also bearing in mind that Bob Catley’s voice has changed a lot in 20 years – to my ears, for the better – and a little garnish here and there but it has stayed true to the original. As they say, why try to reinvent the wheel?

‘Born To Be King’ was originally on 1990s ‘Goodnight L.A.’ album and as Clarkin said AB:ove, it is a choice that sits well with the main song – Mark Stanway explained that it can be taken many ways, but Born to be King is another Christmas title, the Jesus connection and all that.

The song itself is a little shorter than ‘On Christmas Day’, although still longer than your average rock ditty. A little more upbeat, typical Magnum, great riffs and depth as you expect and as you will know if you remembered it first time around. Again more than a straightforward single storied piece of songwriting, pomp and circuMS:tance a plenty, great middle section, teasing, leading to the rising chants of “He was born, he was born, he was born… to be king” and the rocky entirely triumphal ending, synth almost getting you in the diaphragm just to add that little push.

A big contrast in the mood stakes but that is the beauty of it, the despairing set against the rejoicing.

A brief word about the radio edit version of ‘On Christmas day’. At slightly more than three minutes shorter than the full length version, that obviously means a lot of the original has gone, mainly the intro and some of Clarkin’s widdliness. But the lessening of the impact of the song has been kept to a minimum, so kudos to the band and production team.

If you want a Christmas song with its truest meaning, then this defines it as much as anything can, from a purely imagery perspective. Musically, and this won’t exactly come as a huge surprise, it is a joy for the ears, as well as the soul. Magnum are rock royalty in these here parts, and there is a very good reason for it. This release, just reinforces that status.

Lastly, congratulations on the artwork side of things to Al Barrow – as much as most bands strive to keep things in house, this lot really couldn’t do much more… unless one of them is planning on opening up a pressing plant in their back garden. Let me know fellas. 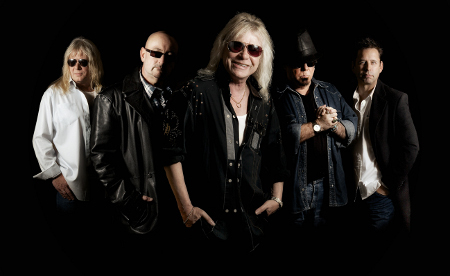 I caught up with Al Barrow and Mark Stanway at Madhat studios and had a chat about, well, several things and once Mark had recovered from his first sighting of my short hair, all went mostly to plan: