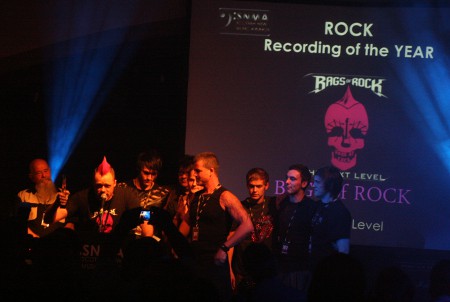 By their own admission, the inaugural Scottish New Music Awards last year weren’t very well received due to the haphazard nature of what transpired on the night, so with lots of lessons learned the 2012 event was meticulous in its planning and truly did what it was designed to do – showcase the very best of Scottish Music.
The Classic Grand, Glasgow

With an unusually high Rock and Metal quotient this year, I sat back for the first half of the awards (the industry section), which were presented by 2011 Group of the Year winners, The Amorettes. The trio then took to the stage as part of the live entertainment for the evening, giving a highly spirited live performance. Unfortunately, for drummer Hannah McKay, the stage was set up in such a position that she was all but obscured at the side of the stage.

Other live acts performing this year included Firebrand Super Rock (whose self titled debut album won the 2011 SNMA Loud/Metal Recording category), Peepshow, who graced the stage with their own unique brand of pseudo-punk and Bags of Rock who brought Scotland’s national instrument well and truly kicking and screaming into the 21st century with a crowd pleasing performance to bring the show to a close. 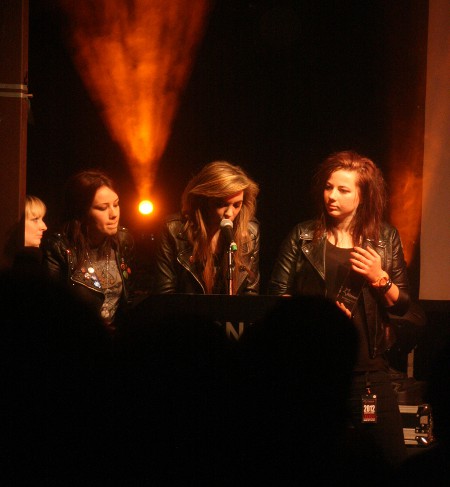 We were here for the awards, however, and as far as these went, there were a clutch of awards won by rock and metal acts throughout the evening. UK festival favourites Attica Rage may have lost out on the Best Album Artwork category, but they comfortably walked away with the award for Music Video of the Year for the track ’36 Insane’, directed by Colin Wood, which comes from their 2011 album ‘Road Dog’. The video itself can be viewed here.

Musical Event of the Year was won by Les Fest which was held for the first time earlier this year at Valley International Park near Lesmahagow. Les Fest founder Dave Ritchie was truly astounded to win the award first time round and hopes that this will build the profile of the festival as it gears up for its second event in 2013. Metal Talk covered both days of the inagural Les-Fest (you can read our reviews here and the first round of announcements for next years’ festival can be found here. 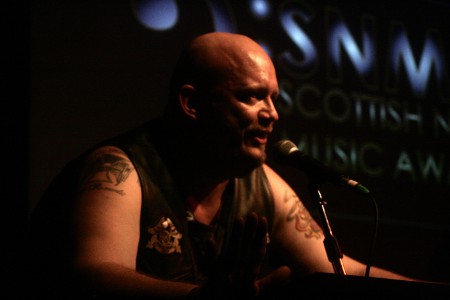 With the Tribute/Function Band of the Year category, it was almost a complete lock out from rock tribute acts with Gallus Cooper (Scotland’s premier Alice Cooper tribute act – whose performance includes an appearance by the same snake used by Alice Cooper on his UK gigs), hair Metal quartet Schtick Of Rock, Still Marillion (who cover only Fish-era Marillion tracks) and Maiden Scotland all battling it out of the prize. Worthy winners tonight were Maiden Scotland who are currently undertaking a small Scottish tour which finished next month. 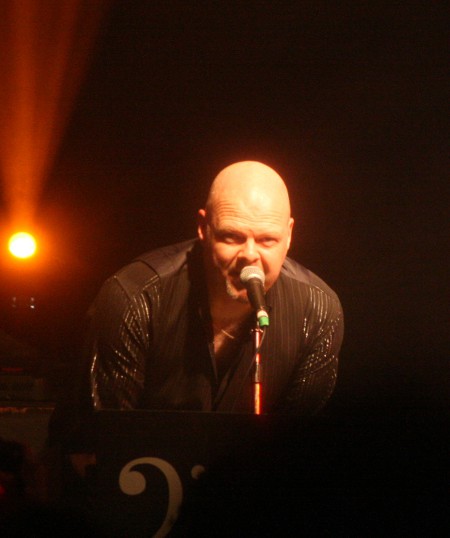 Another hotly contested category was Loud/Metal Recording of the Year with Attica Rage’s ‘Road Dog’, Peepshow’s ‘Brand New Breed’ and ‘Come Out And Play’, the debut album from Aberdeen based Estrella, all battling for the votes. This was the only category this evening that resulted in a tie with both Peepshow and Estrella emerging triumphant on the night – a rare thing in awards ceremonies and even more so when you realize that this particular category was voted for by the public themselves. 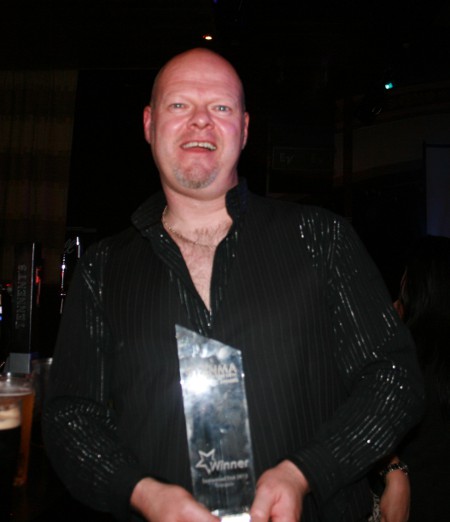 Winning Rock Recording of the Year was ‘The Next Level’, the debut album from Bags Of Rock trouncing the competition of Pure Dead Brilliant, Same Jane, Glasgow based rockers Siphon and Christian rock band Superhero.

Group of the Year also had a handful of rock bands nominated including Peepshow, Bags Of Rock and Superhero with Bags of Rock becoming one of the few double winners of the evening. 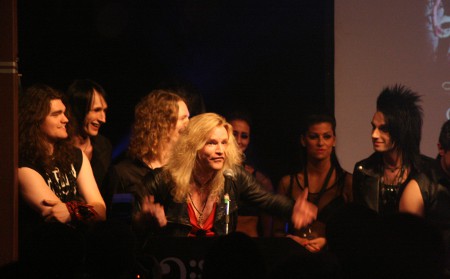 This years’ Lifetime Achievement Award is also worth mentioning as it went to local DJ Tom Russell who famously had a Friday Night Rock Show on Radio Clyde which ran from midnight till 2:00am for over 20 years. Currently residing at Real Radio XS, Tom is still broadcasting all manner of rock music and interviewing established stars as well as up and coming bands and artists.

Before Tom was invited onstage to collect his award, however, there was an 18-minute video montage of Tom interviewing various rock and Metal bands as well as tributes from his family, past and present work collegues and a gaggle of famous friends including Def Leppard vocalist Joe Elliott, Ian Gillan and Doogie White from Ritchie Blackmore’s Rainbow.

Also there in the flesh to present Tom with his award was Chris Glen, bass player from The Sensational Alex Harvey Band and a special appearance from Spike (lead singer from The Quireboys) who had come up especially for the event. 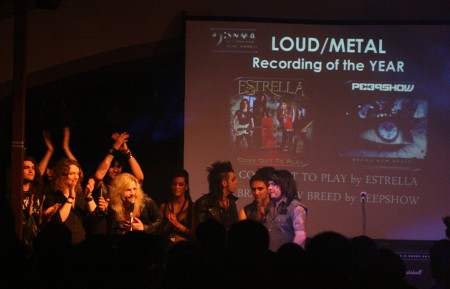 After the success of this years awards, it’s safe to say that we can all look forward to doing the same thing next year and who knows, some of those who lost out this year might be celebrating a win next year. 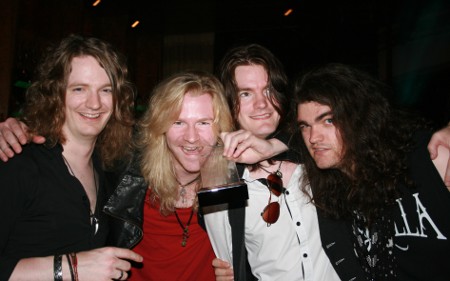 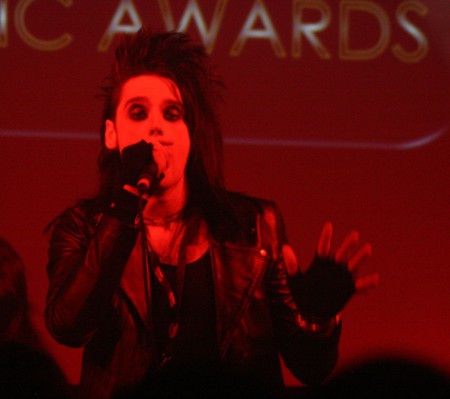 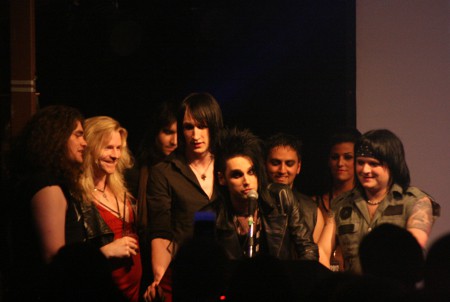 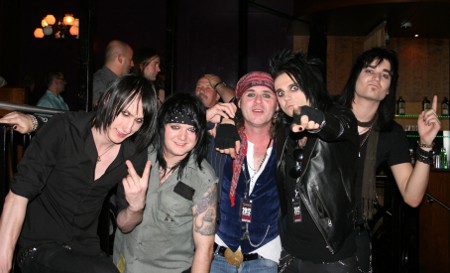 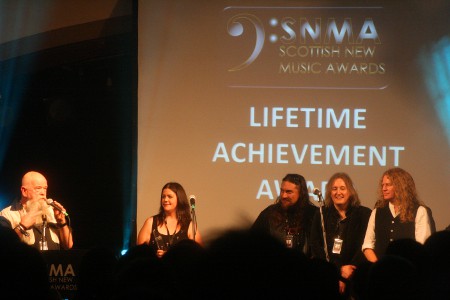