Rising from the remnants of Stuka Squadron, who they took their unique brand of World War II stylings crossed with copious amounts of blood splatter to entertain the Metal masses, the Iron Knights have evolved and are laying down their stake in the ground to prove that despite what happened in the past, the band continue and judging by their performance here, they have a solid base on which to build their future.

With two original members remaining, bass player Paul ‘Beam’ Robbie and drummer Larry Paterson, you have not only the bedrock of the band but they are also the backbone of the band’s thundering Heavy Metal sound.

There are no gimmicks here to sell the band, only the sound of a dozen or so great Heavy Metal tunes.

With the band’s self-titled album not released until May, for the crowd here it was a bit of a step into the unknown, but no-one needed have worried because if the set they played tonight is any indication where the band’s musical direction, everyone should be happy – band and fans alike.

The band’s set tonight is mostly tracks form their new album and there’s no doubt from the off, that the band are better off dropping all the gimmicks of old and concentrating on the important thing – the music. It’s loud, it’s hard, it’s heavy and it’s fast whilst also bringing smiles to the faces of everyone in the venue – including the bar staff who manage a sneaky break to watch this powerhouse performance.

The band literally storm through ‘Transparent’, ‘Fall From Grace’ and ‘Jacobs Ladder’ before anyone has time to draw breath but it’s the song stuck in the middle that is most familiar to the audience – their new single ‘Destroyer’ (free to download from the band’s website now!). Choosing to give away a free download of the track obviously pays dividends as there are heads bobbing along to the beat pounded out by Paterson.

New front man/guitarist Jamie Gibson is a natural in the role of front man as he does his best to get the crowd energised while still managing to give his all to his guitar playing while the other new guy, guitarist Wayne Mann, plays solo after solo and seems to be thoroughly enjoying the experience of his first proper tour with the band.

It’s not all new songs tonight, though, as the audience are treated to a handful of tunes from the bands debut album, ‘New Sound of War’, most likely for perspective most so those present can gauge the newer material against the older tracks. Of these older tracks, it’s ‘The Messenger’ that gets the biggest reaction and gives Gibson another chance to really show how good his vocals are.

A cover of Motorhead’s ‘Snaggletooth’ is also squeezed in before the band finish their set which seems to bemuse some of the audience no end as they are unsure if this is an original song or a very good cover! This may be a short tour from the band this time around, but with the promise of more dates later in the year when the new album is released, it’s certainly a gig that will be on my list to go and see.

A special mention must go out to tonight’s support band, Cloustopia who played an unusual but enjoyable set. Instead of playing the usual rock cover songs or just original material, they took the bold set of playing tracks from computer games and anime films. Front man/guitarist Chris Clouston showed some nerves as did Jamie Little who was filling in on guitar as a last minute replacement but it was a competent performance nonetheless.

Although not familiar with most of the songs in their set, it was enjoyable enough with a cover of Iron Maiden’s ‘Transylvania’ being amongst the best here. 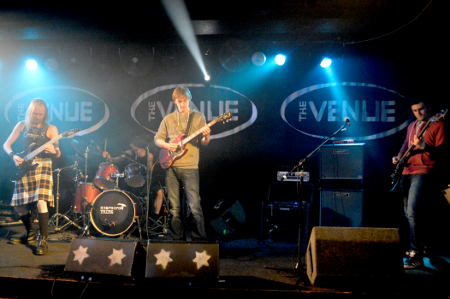 You can hear the new track ‘Destroyer’ here:

LEGENDARY JUDAS PRIEST GUITARIST KK DOWNING TALKS TO MetalTalk ABOUT THE PAST, PRESENT AND FUTURE