Wretched Soul are a modern sounding death/thrash Metal outfit formed in late 2008 in the historic city of Canterbury, Kent.

What the band bring to the fore is a blend of music that mixes the death and thrash Metal genres together with the more traditional Heavy Metal sounds creating a unique sound that is as melodic as it is brutal and the band are also building quite a reputation for their intense and genuinely engaging live shows.

‘Veronica’ is their eight track debut album for which the band managed to acquire the services of renowned producer Chris Tsangarides (Judas Priest, Black Sabbath, Exodus, King Diamond) and what you have here, essentially, is a very impressive album that belies the fact that the band haven’t recorded much (if anything) professionally before.

‘Where Shadows Ride’ kicks things off going from (what seems like) zero to a hundred miles an hour in a matter of seconds before settling down in the style of a good old fashioned thrash number. There’s a solid guitar riff from Steve Clifford over which Chris Simmons delivers his vocals veer from an almost guttural sound to some quite tunefully sung lines. You can almost imagine the band head banging away in the studio while they laid this track down.

There is a slower (but no less heavy) middle section, which gives the band a small respite but it’s not long before the speed ramps up once again. 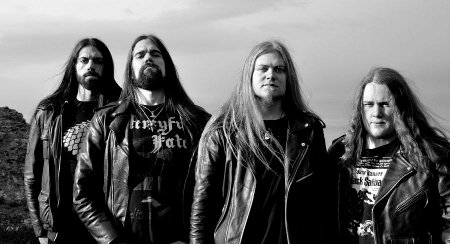 ‘Veronica’ is rightfully the title track here because it is a very accomplished piece with Simmons really stretching his voice to reach some very high notes (and managing to hit them every time) before reverting to a lower register during the verses. With such a variation in vocal range, it’ll be interesting to see how this song transfers to a live situation – if indeed it is added to the bands live set.

Overall, though, the track sounds as if it’s influences come from early Black Sabbath with perhaps a hint of Mercyful Fate in there too (especially in the latter half of the song) but all in all, a great number.

‘Black Wings Of Treachery’ starts off with a ferocious drum beat and heavy guitar riff building up to an elongated scream from Simmons whose voice is buried slightly deeper in the mix compared to some of the other tracks, but his growling style can still be clearly heard. A memorable chorus helps the track and if you don’t find the vocal hook going round your head after a few listens, then you’ve obviously not been listening to the track properly!

‘Dash To Destruction’ is another full-on effort with drummer Andy Clifford really giving his drum kit a workout whist the wonderfully catchy chorus just makes this one of my favourite tracks on the album. Simmons vocals are sounding somewhat stronger on this track than some of the others and his switch between death Metal style vocals and his more refined singing voice really suits this track especially well.

There’s a short guitar solo towards the end too, which is a nice change from the solo being placed in the middle of the song as is the norm. The track brings a good end to an accomplished debut album and it’ll be interesting to see how the band progress to their second album and beyond.

You can see the band perform the title track live at Beermageddon 2012 here: