I don’t believe in voodoo, black magic or Aleister Crowley. In fact that kind of stuff gives me the creeps. But as we all know, out of desperate times come desperate solutions.

Back in the mid-nineties my life reached a crisis point in one area. I’m sure it was a tough time for many of us. The make-up was off, Eric Carr was dead and Kiss had released possibly the dullest album of their career, ‘Revenge’.

OK, ‘Unholy’ and ‘God Gave Rock and Roll To You’ were saved by their writers (Vinnie Vincent and Rod Argent respectively) but really, the rest?

‘Alive III’ came out and was alright but it didn’t set the world on fire like their previous live albums. The band had resorted to touring fan club conventions. Rumour had it that they were growing beards and recording an ‘alternative rock’ album. This did not bode well.

I voiced my worries to my bandmate in the Bruce Dickinson band, guitarist Alex Dickson. He’d had similar concerns, his going back further than mine. It felt good to share our burdens.

He however, had an unshakable conviction that things would take a turn for the better somehow. He read books on UFOs, Werewolves and the Illuminati. He sometimes saw things the rest of us didn’t. Sometimes he saw things even before they had happened.

That night and with quiet determination, he said “We’ll fix this”, in what I thought was a comedy Mid-Atlantic accent.

I laughed it off and thought nothing of it for some time. During that time we played a bunch of gigs with Bruce’s band and then a South American tour got booked.

I was quite excited. I’d never been there before and Brazil (Rio De Janeiro, Bello Horizonte and São Paulo) was where Kiss had played their last few historic gigs in make-up back in 1983. 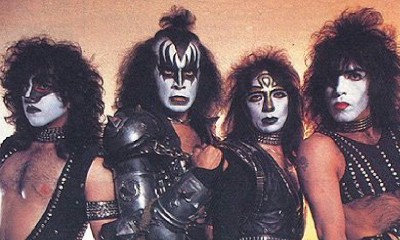 When Alex saw the tour dates he turned to me with a glazed expression and clearly said: “Where they took it off, so shall we put it on”.

The odd thing was he spoke in the same Mid-Atlantic accent I’d heard that time before. Alex usually has a soft Scottish lilt but this was deeper I noticed and more emphatic. It sounded like that spoken voice at the end of ‘The Elder’.

I remember it so clearly now as though it were yesterday but even at the time when I asked what he meant by it he didn’t recall have said anything of the sort. Instead he said something about steaks being good in Argentina, or so he’d heard.

I was puzzled but thought little of it and agreed, yes I liked steak too. I left his place that night with an odd feeling in my stomach and this time it wasn’t just the Hoegaarden.

A couple of months later we embarked on the South American tour, which was of course a great experience. Venues were full, hotels were luxurious and local food was incredible. Steaks are indeed amazing in Argentina. We did some limited sightseeing and generally had a good time.

By this point we were nice and tight as a band allowing Bruce to make the most of his tremendous vocal skills. Every show was a pleasure to play.

South American Heavy Metal fans, it must be said for the record are the best, loudest and most insane audiences in the world. They camped outside hotels overnight, caused riots in the streets and drove against oncoming traffic to get the chance to say hello to Bruce through our mini-bus windows. The gigs went down incredibly well.

It was the first time Bruce had played in some countries. There was a guy in the audience in Santiago de Chile waving a banner saying “I have waited all my life for this moment”. 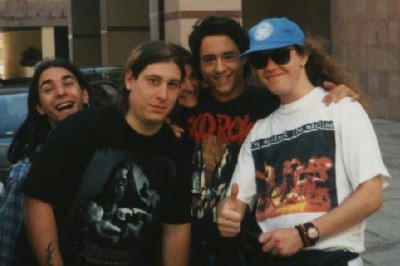 Me with some fans in Buenos Aires, Argentina

We got caught up in the whole Latin spirit of it through several gigs, parties and flights until one morning in Brazil Alex knocked on my room door with that same glazed look on his face that I recognised from months earlier.

He stood there and just said “It is time”.

That’s all he said. I looked back at him, confused for a second.

Then he suddenly snapped out of it and switched back to his normal self saying, “Let’s go and soundcheck! C’mon, we’ll have a laugh!”.
We’d just done two nights at a venue in São Paulo. That evening was going to be our third sold-out show in the same venue. We didn’t need to soundcheck again, surely? It was fine the last two nights.

But no, he was quite insistent. “Come on, what else are we going to do? We’ll get set up and play some tunes,” he said.

I agreed. It was better than sitting around the hotel all day trying to learn Portuguese from watching quiz shows on TV. And he did seem very, very keen.

Bruce was doing press all that day and our drummer, Sponder, was resting his blistered hands. Alex convinced the Silver Fox, Johnny Allan on our crew to play drums. He also convinced, Jed, Andy and Bob to come down and set up the rig early.

While the crew got to work, clearing up the mess from the last night’s show, me and Alex went to the dressing room, where I hoped there might be sandwiches and fizzy pop.

When we got to the dressing room, Alex pulled a greasepaint make up kit out of his bag. I didn’t know he had that with him.

“Where they took it off, so shall we put it on” he said in exactly the same tone as he had months before back at home. This was now getting a little spooky. He sat down silently and started applying Paul Stanley’s Starchild make-up to his face.

To humour him I started putting Gene make-up on. Although I’m a big Kiss fan, I’d never put the make-up on before. It came surprisingly easy to me, almost like my hands were guided. We didn’t use pictures to copy or look at photos of the band. Neither of us said a word.

“Where they took it off, so shall we put it on” 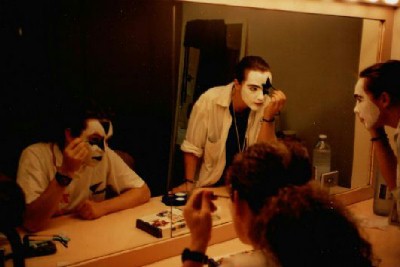 Me and Alex putting on the sacred Make-up in São Paulo, Brazil 1995

With our make-up in place we went down to the stage where the crew were now ready for a soundcheck, except of course instead of checking with songs from Bruce’s set, today we played Kiss songs.

Me, Alex and Johnny Allan burned our way through ‘Deuce’, ‘I Stole Your Love’, ‘Do You Love Me?’ and a few others. It was, as Alex had said it would be, a good laugh.

Bruce came down to the venue and had a chuckle to himself at our tomfoolery. Then we cleaned the make-up off and headed out for something to eat before showtime.

As we tried the leave the stage door, we saw the weather had taken a dramatic turn for the worse. Our whole tour of South America had been blessed with great weather, balmy tropical evenings. We barely saw a cloud in the sky for weeks.

Now all of a sudden a storm had brewed up. The skies were dark and heavy, while a strong wind caught us full in the face. We were practically blown back into the venue by the force of it.

I guess South America is known for tropical storms but this was surprisingly vicious. No sooner had the doors blown shut with us trapped inside the gig, than the winds died down and the skies cleared.

By then we’d decided it’d be safer to stay inside and order some pizza instead. To pass the time until it arrived we threw ham at the dressing room ceiling (it only sticks if you butter it first, we found). Alex seemed distant though and not quite his usual self.

Something weird was definitely going on but I just wanted to ignore it and focus on Bruce’s gig that night and the possibility of another crazy after show party. 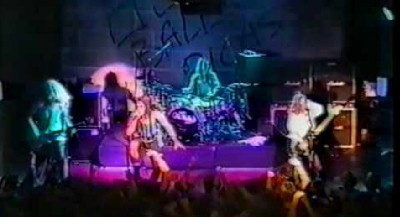 That night we had another great gig. The next day we flew to Rio and the tour carried on as if nothing had happened.

A month or two later and back at home, I saw in the press that Peter Criss had recently got up onstage and jammed with Kiss at one of their conventions.

Apparently he’d rung Gene up a few weeks before (around the time we were in São Paulo) and asked if he and his daughter could attend. Gene had of course welcomed Peter down and asked even asked him to sing few songs. That sounded exciting for a Kiss fan like me.

Following on a couple of months from that, Peter and Ace got together with Gene and Paul for the first time in seventeen years to perform for the MTV Unplugged series. That was amazing but things got even better.

The next thing we heard were rumours of a full blown re-union for the band with the original four members, make-up, classic set list (including all the songs we’d done in São Paulo) and the full stage show.

Us Kiss fans were ecstatic, this was what we’d always dreamed of but thought would never happen. 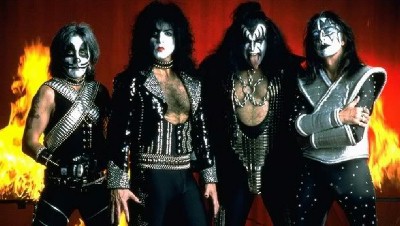 Our dreams came true and Kiss toured the world, back as the conquering gods. They stormed across Madison Square Garden, Donington Festival, the Tokyo Dome and everywhere in between.

They were on the cover of every magazine in the world, except Kerrang!, which had by that point stopped covering proper Heavy Metal bands and was focussed instead on haircuts and pop quizzes.

Kiss were on everyone’s lips (at least everyone I spoke to). It was like the dark days of the early 1990s hadn’t even happened.

We mostly forgot our little dressing up game in Brazil. But was it a game? Who guided our actions? Who spoke through Alex in that Mid-Atlantic accent? To this day he denies saying any of the stuff I clearly heard on several occasions with my own ears.

Did we in fact, by following the instructions to put the make up on “where they took it off”, heal a rift in the time space continuum?

I’m not suggesting the two of us worked alone here, certainly millions of Kiss fans around the world felt the same as us. I believe everyone willed this to happen.

Mass will power is an incredible force. It has been harnessed before in experiments such as the building of the Egyptian Pyramids, Skylab’s safe descent to Earth in May 1979 and of course REM splitting up last year.

The mass will power of Kiss fans all over the globe, combined with our unwitting spell caused Peter to pick up the phone to Gene after all those years and that call set the ball rolling on the greatest rock and roll spectacle of all time – the Kiss Reunion.

Either that or they were running out of business ideas and had hit a brick wall creatively, which doesn’t sound very likely at all for a band as good as Kiss.