With his boy band good looks, Rory McDonald, the creative force behind New Zealand band Voodoo Bloo, has only one direction in mind and that is up.

With their debut album ‘Jacobus’ soon to be released in the UK (more on that next week), Voodoo Bloo appear to be locked, loaded and ready to go down a storm, with a superb collection of songs which show a great maturity of songwriting.

MetalTalk’s Steve Ritchie spoke with Rory, to find out more about the personal issues and experiences which drove the project.

MT: The great thing about this new technology is how you can spread your wings across the planet. How has promoting your album been?

“It has been really great! We have had some awesome traction in recent times and I just could not be happier with how it is panning out. Some days are better than others, but it is just crazy to think we have only existed for about a year now and we have come such a long way.”

What is the story behind moving to New Zealand?

“I think my first memory of life really is watching the episode where spongebob meets his Grandmother or whatever on the flight over here, so I guess my parents would be the better people to direct this to. But I think they would say something along the lines of wanting somewhere safe for me and my sister to grow up and to move away from all the noise.”

How would you describe the music scene over there?

“Up until yesterday, I probably would have told you that I really did not enjoy a lot of aspects of it, but after playing a show out of our city with a lot of dudes around our age, I think that Wellington just is not the place for us. There is a large gap between what you want and support from others in this scene, it always feels like no one wants to help you out. But man, it always feels so friendly and authentic to be out of the city and to talk to people who really cares about music like you do, so it has its hits and misses.”

Recent single ‘Her Name Was Human’ was a great track. The video looked great fun to make. But there was a serious note behind it…. Can you talk about that, please?

“I think that the idea of having the themes of Human, or more specifically the vague concept characterised, was something I really tried to do here. It was important to show and not tell how the main character of the song was feeling, which is really how I felt I had to express myself at the time of writing the track.”

Listening to all the music, there is a big element throughout the album of grief and anger. Was this a cathartic process for you?

“Without a doubt. I will never forget the rush that I got on the first morning it came out. It was a feeling of self-worth, but it also led me down this road of unknowing, which I feel I am still navigating a bit at the moment. But at least I have worked through all the pain of that chapter of my life. Now, I just have to figure out the next.”

Even in tracks like “A Brother…..” (I love the outro) there is a channeled aggression there….

“Yeah, that one is very, very special to me. I do not think any song I have written will sound close to this again.”

And then just the guitar and voice and guitar for the final song. As a whole piece it is quite emotional….

“Well it was just my means of letting it all out. I could not help but cry when listening back, and even recording, as you have probably picked up. It was a low of my life, but I am so grateful I got to turn all of those emotions into something I’m proud of.”

You have a touring band? What are your next plans… next album, or support this current one?

“I guess it’s a mix of both right now. We’re really close to closing off the idea for the next project, but now we have just got to go in and demo the thing to make sure we have all the pieces. But apart from that, we have some pretty exciting events coming up that I am sure you don’t want to miss. Keep your eyes peeled….”

Given the global problems caused by COVID-19, can you tease us all by telling us what it was like to actually go out and play a couple of gigs?

“It was honestly so much fun. I totally recognise that a lot of other places do not have the luxury that we currently have here, but I feel like personally I am going out and seeing a lot of new local bands and I think a lot of other people are too. This really does seem to be a time of resurgence in NZ music and I am all for it.”

New Zealand currently has one of the highest teen suicide rates in the world. You have played a number of charity shows for Lifeline Aotearoa. Can you talk about their work and why it is close to your heart?

“Lifeline Aotearoa was a group that I found not long after the passing of one of my close mates. When we finished the album, I felt like I really wanted to work with them on a few shows as they really are dedicated to suicide prevention and awareness.

“Without people like them, it makes it harder for people to find support in times of need. So it is important to use the platform that I have created to try and give back to such a massive problem within our communities.” 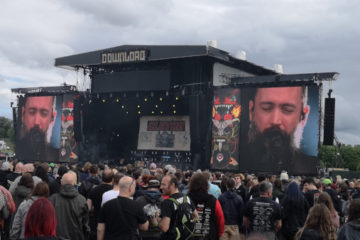