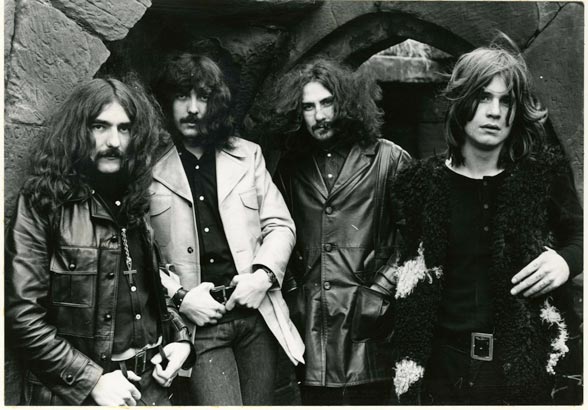 “We would like to start off with a number off our new album. It is a number entitled Paranoid”, states Ozzy Osbourne, before Tony Iommi launches into the now classic riff.

This is how Black Sabbath began their set from Montreux in 1970, one of two live sets included in the 50th anniversary reissue of ‘Paranoid’.

It can never be understated the absolutely seismic impact Sabbath had on the scene.

Coming at the very fag end of the late 60’s Summer of Love, they were the polar opposite of a lot of the hippy flower power movement: four rough-arsed blokes from Birmingham playing a very distinctive brand of granite-heavy rock music.

For kids all over the country, here was a band they could relate to, one totally grounded in the same working-class life they shared, not in some imaginary sun-soaked paradise on the other side of the Atlantic. 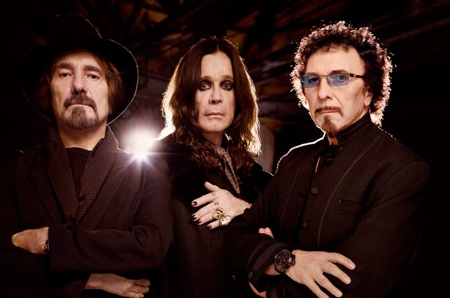 Sabbath also brought an air of dark fantasy with them too and tapped into imagery that conjured up the hugely popular, but slightly tongue in cheek, Hammer Horror films so popular at the time which added to their appeal.

The instinct of the popular press to pigeonhole them as a Heavy Metal band who just wrote about dodgy happenings in graveyards was to totally underestimate both their intelligence and musicality, as more than a mere casual glance at their material revealed.

Along with the other live show, recorded in Brussels in 1970, they capture a young and hungry band who sound simultaneously tight, while far removed from the seasoned vets we would hear in the following years, never mind after their long awaited reunion a couple decades later.

The Montreux set captures the band shortly before the release of the Paranoid album, where many now classic songs such as ‘Paranoid’, ‘Iron Man’ and ‘War Pigs’ make one of their earliest live showings. ‘War Pigs’ in particular is of interest as it features the rare alternate lyrics that never made the actual album.

Rather than lyrics filled with political commentary like we have come to know, these lyrics are more in line with the horror inspired lyrics of the bands namesake song off their debut album, with lyrics about a black mass.

This set is filled with examples of a young, more inexperienced band as well. The outro of ‘War Pigs’ is not as refined as it would eventually become and ‘Paranoid’ sounds a bit more jangly in spots than most later versions.

Generally however, the band powers through these new, for the time, songs with superb tightness.

They also sprinkle in tracks from their debut album including ‘Behind The Wall Of Sleep’, which would certainly be considered a live rarity by present day standards.

There are also moments between songs where you hear the band tuning, and frontman Ozzy Osbourne talking casually to the crowd in attendance, which adds to the intimacy of this show, especially compared to the massive arena tours from recent years. 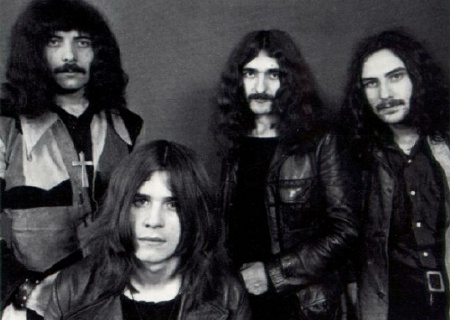 The Brussels set was recorded just a few months after Montreux for Belgian television. Already there is a leap in tightness with the Paranoid tracks, which dominate the set.

While the band sounds even tighter and more refined in their delivery, Ozzy Osbourne in particular, seems to have fully stepped into his own as a frontman in the few short months since the Montreux show. His vocals take more command of the songs and the interaction with the audience is less casual and more demanding. The Prince Of Darkness  has begun to come into his own.

These two sets, Montreux and Brussels in 1970, perfectly captured the band during this time period.

Montreux captures them as inventors of a genre, about to release their biggest mainstream album, while Brussels, just a few months later, captures a more experienced and seasoned sounding band, who seem adamant on becoming as big as their sound.

There is no denying, even in this early stage of the band, how great and powerful they were. While they are not currently active, Black Sabbath still are Heavy Metal, even 50 years after the release of Paranoid.

MetalTalk spoke with Stephen Knowles, who created the Sabbath show at Birmingham Museum and Art Gallery, which was part of a series celebrating history of Heavy Metal.

Knowles, who is friends with band, has collected memorabilia over the years, having first becoming embroiled with the band from the ‘Sabatage’ album, Sabbath’s sixth, in 1975.

That ‘Paranoid’ was the album, with more financial and artistic support from the record label, which helped propel Sabbath to the next level, has been documented in full over the years and its place in history is cemented.

Stephen told MetalTalk: “I was trying to think of a way to put a different spin on writing about the album, but its impossible.”

The exhibition in Birmingham proved a great success, evidence if you ever needed any, that the appetite for all things Black Sabbath remains.

“We’re looking to make the exhibition permanent,” Stephen says. “Tony’s involved with it and I’ve had a few meetings with Tony’s manager, but due to Covid we couldn’t do anything this year.

“The exhibition was a massive success. All the people at the museum loved it. It was the biggest grossing exhibition they’ve ever had there. Which just goes to show the pull of Sabbath.”

Having released their game changing debut just six scant months previously, their sophomore album ‘Paranoid’ was to be a benchmark that quite literally changed the musical world and still stands as an inspiration today, some fifty years later. 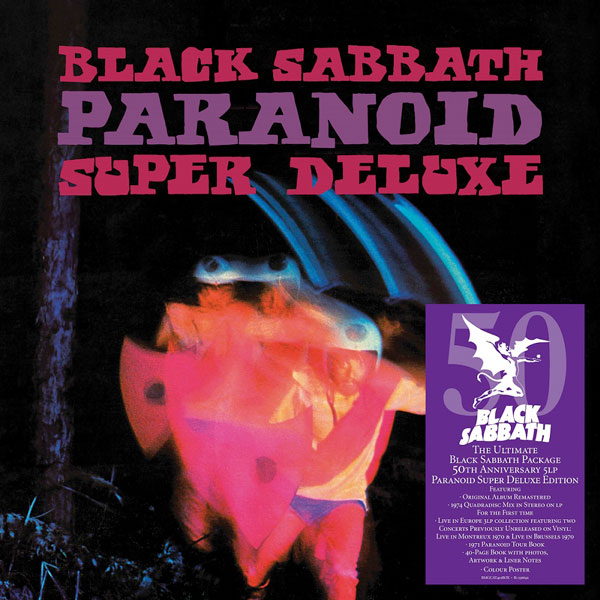 The package the band have got together for this anniversary re-release is something very special and listening to these songs that have become so intrinsically intertwined with the fabric of the genre shines new light through old, but still stunning, windows.

Much in the same way that the recently remastered ‘Ace of Spades’ brought Motorhead’s classic to new and feral life, the 2012 remaster of ‘Paranoid’ included in the set adds a brilliant edge sonically, whilst never taking away what made it so thrilling in the first place.

Some might argue that the sludgy sound captured so perfectly on the original recording is how you’re truly meant to hear it, but this version brings a truly live feel to proceedings and resonates with the excitement and vibe that must have been felt in the studio when it was first recorded.

The album deserves, indeed cries out, to be played at masonry crumbling levels of loudness and an apocalyptic ‘War Pigs’ opens the show with both breathtaking grandeur and heaviness.

Sirens wail as the track quickly picks up steam, the guitar devastating in its sledgehammer punch, making way for Ozzy Osbourne’s distinctive and famous opening lines.

Sonically sharp and really bringing Geezer Butler’s bass out, whilst Tony Iommi’s almost psychedelic guitar work creates patterns that flip from crushingly heavy riffs to delicate touches, here is something that sounds as good today as it ever has, possibly more so.

In addition, Bill Ward sounds excellent and you can hear a real ‘as it happened’ sound in his drums, Ozzy suitably selling the lyrics that speak of the horrors of Vietnam and the people who sent thousands off to die from the safety of their desks.

Title track, lead single and staple of Heavy Metal, ‘Paranoid’ enjoys a very raw feel with only Ozzy’s vocals placed, as per the original, slightly lower in the mix to set this out as a studio rather than in-concert take.

The solo suitably fuzzed up, it’s pretty breathtaking that this legendary song took less than a half hour to write but the band were obviously firing on all cylinders and what could have been a throwaway track, recorded at the end of the sessions to fill up time, turned out to be their totemic piece.

It was a stroke of genius to place ‘Planet Caravan’ next in the running order, the song woozy, chilled, smoke filled and dream like. A cooling, but unsettling, balm after the mania of ‘Paranoid’, it glories in a cool jazzy guitar solo as the bongos play in the background.

It’s back to one of the most seismic of songs in their entire catalogue as ‘Iron Man’ famous opening spoken phrase and riff comes in. Your senses are filled with the frantic bass playing and drumming before the thick as treacle central hook takes back over, pinning you to the wall.

It’s somewhat ironic that the song is now associated with a Metal clad superhero, destined to save the world, whilst Bill Ward’s lyrics tell the tale of a time travelling man doomed to destroy it.

‘Electric Funeral’ suitably is dark and doomy with an edge and ‘Hand of Doom’ matches Geezer and Bill’s crawling and unhurried intro with Ozzy’s unhinged vocals. The time and tempo change at two minutes into a gallop and romp, showing a multi layered piece, the band real pushing themselves creatively, experimenting with what they can do and achieve.

Born from long shows with scant material, the drum solo ‘Rat Salad’ is dripping with psychedelic and almost jazzy instrumentation, that really shows off Bill Ward’s chops, Iommi and Butler throwing in an odd line to spice things up.

Relating the tale of an unpleasant encounter with some local skinheads, closer ‘Fairies Wear Boots’ is a helter skelter of a song that mixes heavy duty riffing with dancing and light melodies to counterpoint the areas of light and shade displayed in the title.

Additional material comes in the shape of two live shows and the four-disc set is completed with a 1974 quadrophonic mix.

A huge gimmick at the time, the mix certainly swirls around your head, certainly adding to the atmosphere, but the collection may have been enhanced further by plumping for a 5.1 sound set up instead. 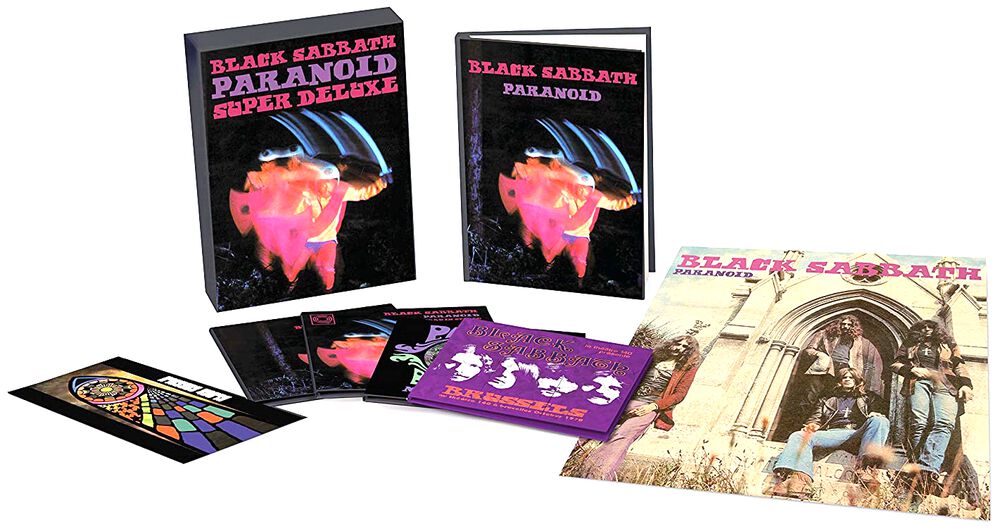 Given just how good Pink Floyd’s ‘Dark Side of the Moon’ sounded using this more modern format, it could be seen as a missed opportunity to truly get the sense of Butler, Iommi, Osbourne and Ward playing in your sitting room.

Overall, this slight quibble aside, this stands as a brilliant celebration of one of the best and most important Metal albums of all time and is an absolute must for any serious music collectors’ library.

A touchstone for all that was great at the turn of the decade and remains a giant landmark since, file under: ‘Essential’.

To Win a copy of the CD boxset, say ‘Hello’ to MetalTalk an email to comp@metaltalk.net. The draw will be made next Sunday.