Suzi Quatro / “I’ll always be the girl from Detroit”

The bass playing, leather clad Suzi Quatro paved the way for female Rock stars in the 70s. In Liam Firmager’s 2019 documentary, ‘Suzi Q’, the likes of Alice Cooper, Debbie Harry and Joan Jett paid tribute to her pioneering effect on the music industry.

Suzi Quatro will release her latest album ‘The Devil In Me’ 26 March 2021, with her first single due out 19 February.

MetalTalk’s Mark Rotherham was duly impressed with ‘The Devil In Me’ and recently spoke with Suzi about the past, the present, the new album and all points in between.

The conversation was as wide ranging as the album itself.

Here is Part One of the interview. Part Two can be found here.

What can your fans expect from your new album?

Suzi: “They can expect everything they have always known and loved about me, but with the added bonus of my son, Richard Tuckey, who was responsible for lighting my fire and I did not even know I needed it.

“He gave me the confidence to do this. He said to me, ‘I know what album you should be doing.’

“He knew and I do not know how. He just knows me and he has got it ingrained in my brain. He turned me up to 11 and now I really trust him. Now, when he throws me a riff, I know it is going to be good. He has got the ears and he has got the vision and he is doing it for me. He knows the music I should be doing.

“And my son has been a musician a long time. At one time he was in a band, but could not get signed, even though he was becoming excellent on his guitar. I told him he had to make a living and I used psychology on him, so he cleaned windows, then he came out fighting his corner.

“By making him get a second occupation, I forced him to go inside himself and find this huge guitar and songwriting talent. He said ‘I need to write for you’ and it forced him to up his game, which then forced me to up my game.”

Would the Devil in Me have ever happened if it had not been for the lockdown?

Suzi: “Yes, it would have happened anyway. After my last album ‘No Control’, which was a great success, Richard already had the idea for the next album. It might have been later, but it was always going to happen.

“When the option first came up, we did not know when we were going to write the album. Then we had the time, so we said let’s write the album. And you take your influences on what is happening at the time.

“‘My Heart and Soul’ was all about me not seeing my husband for two and a half months and it was magic when the song happened. I just went out and sang and it was so perfect.

“For that song we used the demo, it was that good.” 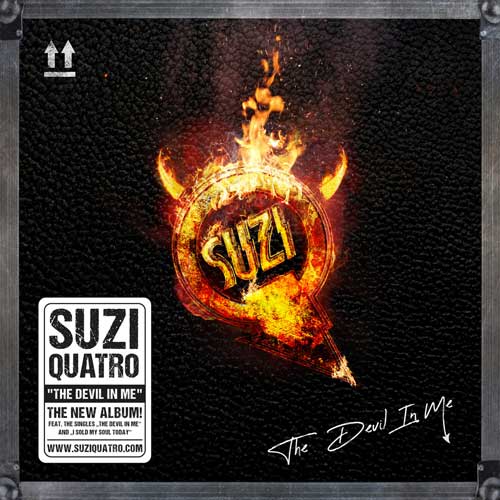 Did the lockdown, social distancing and travel bans impact on the way you made the album and how did you get around any difficulties?

Suzi: “We had no difficulties, because we worked together and followed the rules. We have the studio here and stood in different areas, different corners, with masks on. At the studio stage, social distances remained.

“I was at one end, exactly how it should be and everyone followed the rules. The studio had a live room and everyone was in there one by one.

“The demo for ‘The Devil In Me’ was done one by one in my garage.”

You have said ‘The Devil in Me’ is your best album so far. Why is that?

Suzi: “Everybody says it’s good, I think this is my best work because it managed to relight my fire at my age and with all my experience.

“Richard wanted to best the first album we did together. This album is a 70 years old artist with a 36 year old guitar player, wanting to carry on the legacy of my ex-husband and previous guitar player.

“There are lots of things I would not have done, but it is so me and nice to be completely me again, with a new fire. It has really challenged me.”

What made you decide on the title track as a single?

Suzi: “It just felt right. I had the title six months ago. Richard and I were talking, it came up in conversation and Richard said ‘that’s a great title, that’s the title of the album,’ and it just came together.

“I put the lyrics in my songbook, Richard showed me the riffs, I put it in my songbook. As I was looking through my lyric book it fell out on to my keyboard.

You have been associated with the bass guitar for a long time, but you are also the singer. Are you a bass player more than a singer, vice versa or both equal?

Suzi: “It’s hard to separate. People say I was born with a bass guitar. In Rock ‘N’ Roll they go together. The main thing is I am an artist, I have done everything, poet, writer, DJ, actress, all of those things.

“I just need to communicate and connect.”

Detroit has spawned some serious musical acts over the years: it’s got a rich blues and gospel history, The Supremes, Madonna, Alice Cooper, Kid Rock, Ted Nugent, White Stripes, and of course yourself. What is it about the place that gives it such a rich musical heritage?

Suzi: “I will always be the girl from Detroit. I have had this conversation with lots of people from Detroit and there is just something there, but it is hard to explain.

“When you are from Detroit, there is an edge there. It is fanatical, like your foot is on the gas and all cultures and ethnicities mix wonderfully. It is a great city, and it has given me a real Rock ‘N’ Roll edge in my approach to everything.

“It is a city that teaches you to survive. ‘Motor City Riders’ is about Detroit and me. It is what I say about Detroit people. There is nothing like Detroit.”

Your career and your life, appears to have been truly transatlantic. Do you now consider yourself as much a Brit as an American?

Suzi: “No. Even though I have been here a long time, I have never been or will be British. You can not take the Detroit out of the girl. I have also spent a lot of time in Australia. I am Italian/Hungarian and I feel the Italian blood when I am there, but when I go to Detroit, then I am home.”

Do you think the pandemic has changed the music industry now, and in the future?

Suzi: “I hope not, but I don’t know if and when gigs are coming back. We can only wait and see. It might change peoples’ attitudes, give them a fear of going to concerts. Nobody knows. If it does happen, it is a shame.

“We need the music to survive, the entertainment. I hope it has not changed and I am still here and I’m ready to go.”

There is quite a list of musicians that you have influenced over the years: Tina Weymouth, Joan Jett, Girlschool, Chrissie Hynde, Kathey Valentine, the band Tuscadero and KT Tunstall paid homage to you on her album cover Drastic Fantastic.

That is quite a legacy. Do you feel that speaks on its own for your achievements?

Suzi: “Yeah, I can’t say that I set out to break down the door; I have just been true to myself.

“But by doing that, I did break down the door, although I did not realise it until I saw the documentary about me. Seeing yourself like that is when you really see something and it was only last year when I realised what a difference I had made.

“When the penny dropped, it humbled me. I called a friend and shared it with her, that doing what I did I opened the door for all women, and she said ‘and you just got that?’

“But, if I had been doing it purposely, it would not have been the same.” 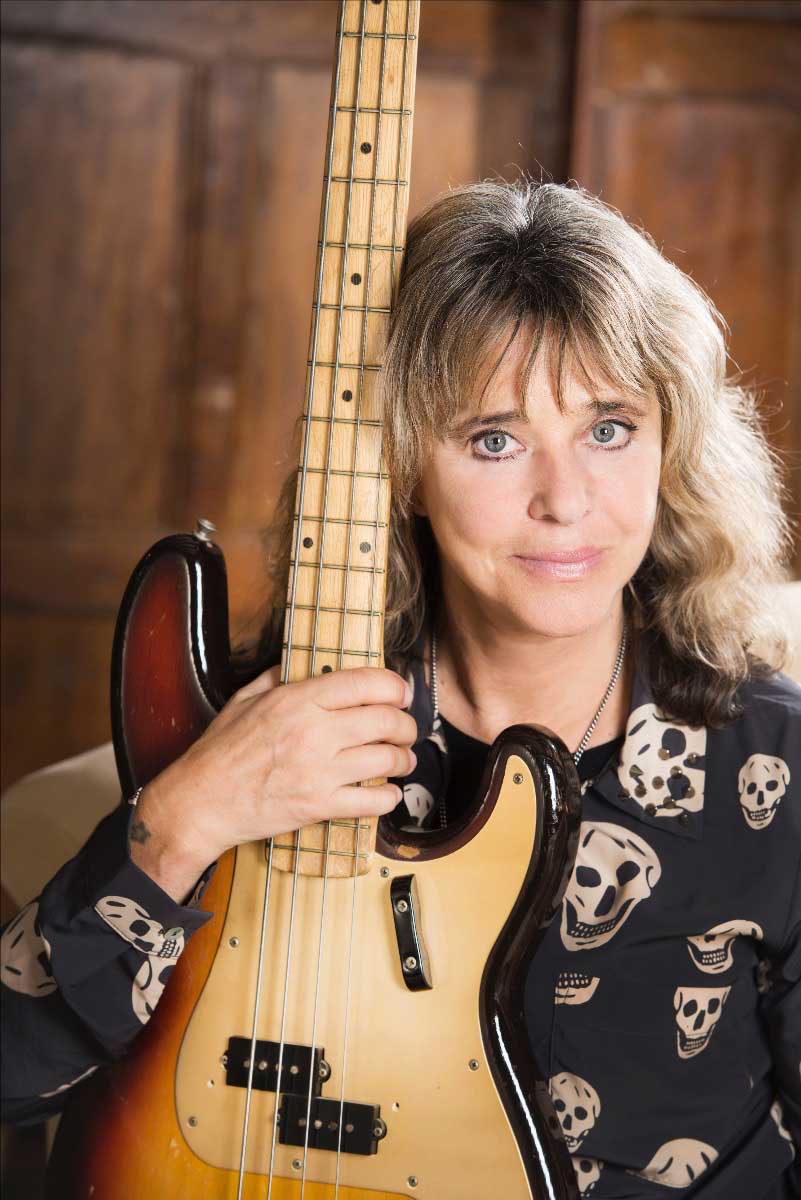 And in your influences, of course there is the Elvis influence early on for you, but who else?

“When I jam to Otis Redding, I play the same bass lines as Jamerson. Singing wise, Elvis. That was a light bulb moment for me. Bob Dylan for lyrics, Billie Holiday for vocals.

“For me, Rock ‘N’ Roll is just like breathing.”

You once said that you started creating your songs on the piano, then worked on the bass, then piano, then lyrics, then the guitar. Is that still your preferred method?

Suzi: “I don’t follow a certain system each time. Each song is different, sometimes I just have a title, sometimes it is a line, sometimes a riff. Every song is just different.

“The best ones are when it just happens. For ‘My Heart and Soul’, when I got to the studio it was like someone just handed me the lyric sheet.”

You are singing and playing bass on the album, but who else was there? Tell us a bit more about the musicians. Will we be seeing and hearing them alongside you on the road?

Suzi: “It is the same except for Richard. I have a horn section and they have been with me for 25 years. I have a piano player with me on the album, I have my guitar player on the road and the drummer is the same.”

Part Two of the interview is out Friday.

For more details of the album and 2021 tour dates, visit www.metaltalk.net/suzi-quatro-ready-to-unleash-her-finest-album-to-date.php