Study Reveals How Sounds Draw You to Slot Games

The numerous features of slot machines have distinctive, measurable, and physiological effects on players. Sound is one of those major features that play an important role in reinforcement, and thus on the arousal level of the players. It is the use of sound for positive reinforcement in particular that influences the slot machine players.

Mike Dixon, a psychology professor at the University of Waterloo, has been involved in various slot studies over the years. The research on games’ sounds is one of Dixon’s best works.

His study reveals that certain slot sounds can make your brain think that you’ve won more money than you actually have.

For instance, you might bet $1 and only win $0.30. However, the sounds from the machine may convince you that you’re truly a winner.

Specifics of the study

The study involved 96 participants, where each gambler played two sessions on a slot simulator.

Dixon and his team measured the player’s physiological responses to the outcome of the slot machines. Wins, losses, and losses disguised as wins (LDWs) were all recorded with the sounds both turned on and off.

The players’ palms indicated how they were feeling in each situation. Their palms, which were tested for skin conductance, became sweaty when they got excited. Their heartbeat rate also increased during periods of slots arousal.

During the first session, wins and LDWs were strengthened by celebratory noises and animations. In the second, the music was turned off and only the animations were left.

After completion of both the sessions, researchers asked gamblers which round they had more fun with. Dixon and his team also inquired about how the players thought they did in terms of wins and losses.

During the session with sounds, heart rates were faster and skin conductance tests were also greater. Players also felt that they won more money during the first run.

However, the reality was that the players simply overestimated how much they won during the first session. Estimates on wins were 24% in the initial round versus 15% in the second session. In reality, the winnings were the same for both rounds.

“While sounds may contribute to the players’ enjoyment of the game, they may also lead to an overestimation of winning,” said Mike Dixon.

“Both of these study effects may contribute to gambling problems, such as misconceptions about the true chances of winning, and the persistence that some players experience when playing slot games.”

According to the study, developers intentionally add sounds to convince gamblers to play longer. As a result, you may feel a little wary about playing slot games or even visiting casinos in general. After all, you’ll immediately hear these noises when playing slot games.

Of course, you don’t have to fall victim to the addictive qualities of these noises. You can avoid this by knowing what slots sounds are designed to do.

The Quireboys announce 'A Bit Of What You Fancy' tour

Study Reveals How Sounds Draw You to Slot Games 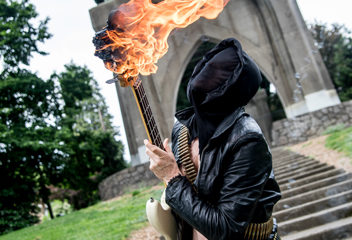