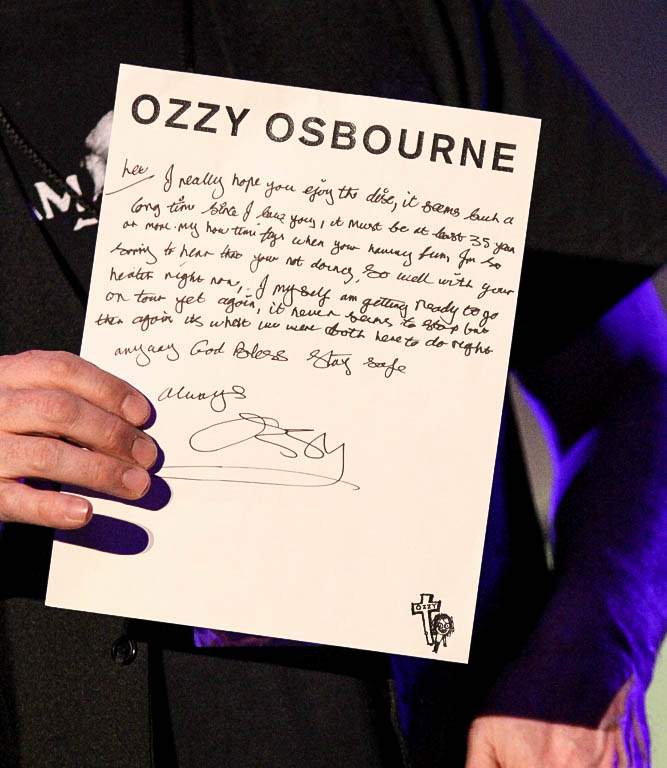 It was a sparkling occasion last Wednesday in Anaheim, California when the third annual Hall Of Heavy Metal History inductions produced a night of a thousand stars in more ways than one on an occasion that will be talked about for years to come.

The world premiere of the new feature length documentary film from Cleopatra, ‘Band vs Brand’, made it a lively and interesting start to proceedings with this year’s inductees including Mike Portnoy and Dave Ellefson, Bob Daisley, whose award was accepted by John Sykes, as well as producer Max Norman and drummer Lee Kerslake in a rousing and poignant Blizzard Of Ozz special.

Drummer Lee, recently given just months to live, was presented with his platinum discs for his contributions to the ‘Blizzard Of Ozz’ and ‘Diary Of A Madman’ albums and Hall Of Heavy Metal History President Pat Gesualdo read out the handwritten letter from Ozzy that accompanied this massive gesture from the Osbournes.

Budderside frontman Patrick Stone got carried away during the LA rockers’ blistering and captivating live set, jumping onto Wendy Dio and Todd Singerman’s front row table to address the crowd, while the live set from Appice brothers Vinnie and Carmine was a double whammy of spine-shaking greatness.

Check out our photo gallery right here and stay posted for news of the 2020 inductions right here on MetalTalk.

Cosmic 108 are a very proud sponsor of the third annual Hall Of Heavy Metal History inductions where Lisa S Johnson, photographer and author of coffee table book ‘108 Rock Star Guitars’, presented her debut collection, ‘Cosmic 108, a cosmic rocker athleisure line, that sparkles with sacred geometry emblems and guitar inspired accents. This collection is designed to raise your frequency in your daily practice and transcends superbly into evening wear. Click here to see more of Cosmic 108