ZZ Top, the self proclaimed little ol’ blues band from Texas, haven’t played in Scotland very often in their near fifty year career so when they announced that they were returning there was a buzz of excitement north of the border.

The surprising thing was that they elected to do so in the 2,500 capacity O2 Academy rather than the expected arena show. After a tickets scramble and a quick sell out the result is a venue that is near bursting at the seams prior to the band coming on. The downstairs area is more packed than I have ever seen it and it’s a cramped, sweaty place to be. 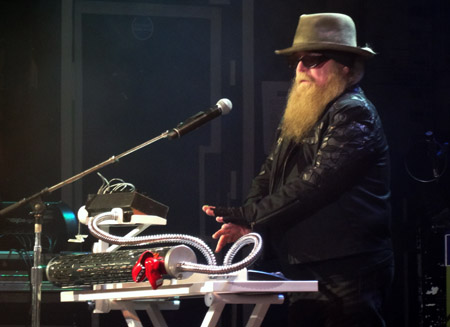 All that discomfort is soon forgotten by everyone once the band appear and launch into ‘Got Me Under Pressure’. Instantly the crowd is singing along and the place is buzzing with excitement. The following double dose of that older bluesier side of the band in ‘Waitin’ For The Bus’ and ‘Jesus Just Left Chicago’ is equally well received and a signal both that the band are going to cover their extensive back catalogue tonight and that the crowd are up for all of it.

I’ve seen these unassuming Texan giants of rock before and at previous shows I thought the samples and sequencers used in the songs from the ‘Eliminator’ era didn’t sit comfortably in their live sound. That issue seems to have been resolved tonight. Throwing in the occasional big hit like ‘Gimme All Your Lovin” and ‘Sharp Dressed Man’ sends the place potty but the sound is just right, the augmentations to their basic blues trio vibe adding just the right amount of groove. 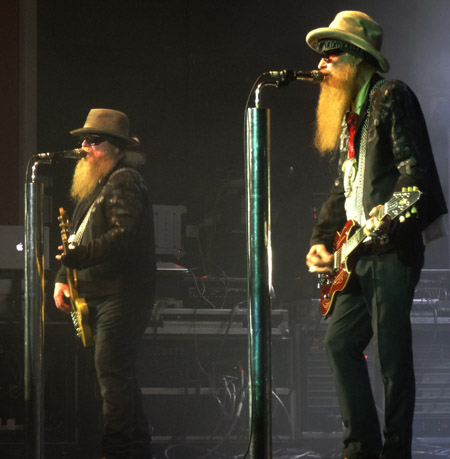 As a blues three-piece they genuinely have few peers. Billy Gibbons is a bona fide legendary guitar player and he has lost none of his skill over the years judging by his sometimes subtle, sometimes incendiary playing tonight.

Dusty Hill and Frank Beard are one of the most reliable rhythm sections you will ever hear plus both Hill and Gibbons retain gritty, strong, authentic voices so the vocals never let them down either. Add in song writing which lets them throw classics like ‘My Head’s In Mississippi’ and ‘Cheap Sunglasses’ into the set and you see how humble that little ol’ blues band line is. 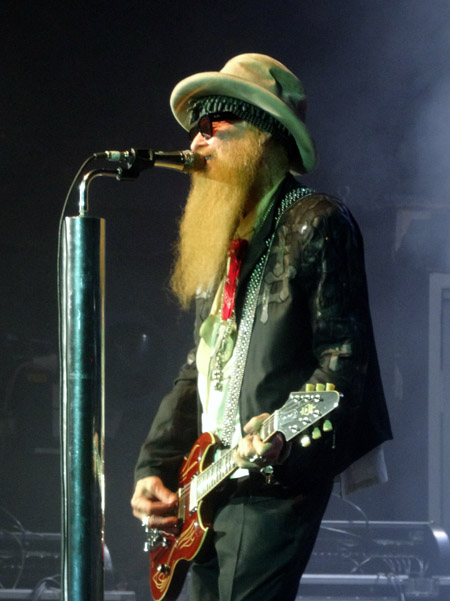 Like any great band they can get away with surprises too. I wasn’t expecting to hear a tribute to Hendrix in a fantastic and well received version of ‘Foxy Lady’, nor a cover of the forties classic ‘Sixteen Tons’. Here in this atmosphere and in this form they could actually get away with anything and even the grittier blues of more recent and less well known tunes like ‘I Gotsta Get Paid’ still kept the groove and atmosphere on track.

All that musical savvy is augmented by a tongue in cheek approach to being on stage, with a sense of fun never far away, whether it’s playing guitars with sheepcoats on during ‘Legs’ or getting the crowd to bellow along to ‘I’m Bad, I’m Nationwide’. They still have a bunch of those synchronised little moves too which in other bands would look cheesy or even camp. However when they are executed by Billy and Dusty somehow they are cool and fun, this is a band with a real charisma all of it’s own. 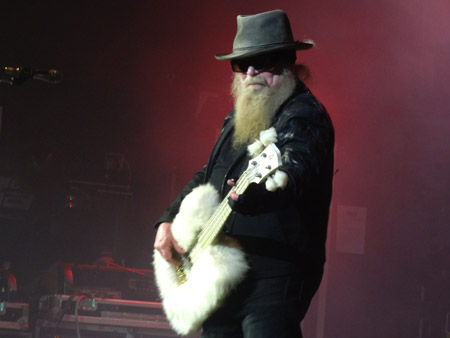 This was easily the best show I’ve seen from ZZ Top, and the comparatively small setting really allowed their true blues rock trio roots to be shown off in the best manner possible. A triumphant return to Scotland – let’s hope it’s not so long until we see them back here.