Belgium’s Blackened Death Thrashers ‘Slaughter Messiah’ have unleashed their the debut full-length album ‘Cursed To The Pyre’ but don’t be surprised by the sophisticatedly “Thrashtastic” nature of the album as the quartet have been finely honing and evolving their sound over the past nine years in the shape of two demos and three EP’s as well as building a pretty loyal following.

Sound wise ‘Slaughter Messiah’ have been inspired by the past “great masters” of Metal, so much will feel comfortably familiar, forming these aspects into their own dark, aggressive and misanthropic sound.

It’s pretty much a brutal, driving and unrelenting offering across it’s somewhat surprising forty-two minute duration, considering it’s just eight tracks long, there are some hefty beasts here falling between four and a half minutes and seven minutes duration but don’t expect it to be filled with “widdly fillers” this album is all killer, they haven’t even humoured us with an intro, it’s just a get in get the job done and then continue the aural assault on you just for fun and because ….well, they can!

The most brutal aspect for me is the ear perforating screams which permeate that already brutal assault, it hasn’t done my eardrums any favours but some things are worth the suffering as there is something very compelling that draws me in to this release. 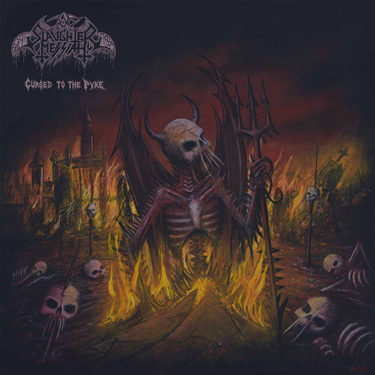 Rather than a protracted intro favoured by many bands, on ‘Cursed To The Pyre’ you get, on the opening track, ‘From The Tomb Into The Void’ a much more suitable, very ominous and sinister, scene setting, forty-five second opener that builds with vitriolic intent before launching into full throttle Black ‘n’ Thrash, then midway you get that first ear splitting scream, a great track that direction wise flits around manically and boasts seriously good second half, thrashy leadwork.

‘Mutilated By Depths ‘ begins with another very sinister, slower blackened opener, blackened riffs alongside a thrashy gallop, I love how these guys mix it up, adding in a big chunk of  Death Metal mid-point before careering into a thrashy second half with that blackened opening riff returning to haunt you and herald the second half lead swathe and a touch of melody that turns sinister to close.

On ‘Pouring Chaos’ they go straight for the jugular with a manic thrashy chunk of leadwork, no messing about with this track, take it as a warning as this track is full on from the offset, to manic proportions, break neck riffing and deranged screams, it does level out briefly but is predominantly  crazy and chaotic in a clever and well-constructed way, as the title suggests, I love it!

Epic in duration, at just under seven minutes, as well as in delivery ‘Hideous Affliction ‘also manages a certain atmospheric quality, with a manic deranged edge, let’s be honest you’d expect no less at this point but continuing to surprise as midway it does deliver a groovy up tempo segment with suitably flamboyant leadwork.

‘Descending To Black Fire’ is a dark plodder to begin, with a sinister underlying thrashy edge, this more or less forms the back bone, then just ramping up the pace and intensity, simple but hugely effective, with still more surprises midway as things turn a little groovy before the uplifting leadwork hits home then returning to the core sound of the track.

‘Pyre’ has a surprisingly long intro which lulls you into a false sense of security because when the track launches into full tilt Black ‘n’ Thrash it totally takes you by surprise, a much broader range of vocals used here …. including more of that ear ripping scream. I like this track a lot, pace wise it ebbs and flows very organically in a similar manner to the way it opens but not quite as brutally.

‘The Hammer Of Ghouls‘ is chunky and sinister with equally sinister overlying riffs to open,  turning into a dark galloping Thrash  but slowing considerably in the second half emitting an even more dark and sinister Death Metal tinged aura.

This album is unrelenting to the end with final piece, the blackened Death Thrash extravaganza ‘Fog Of The Malevolent Sore’.

As drummer J.B. and vocalist/ bassist Lord Sabathan respectively and summarily state, ‘Cursed To The Pyre’ is “pure and uncompromising Metal of Death” that is set to “conquer the world and kick more ass”, yeah, I think that’s a given!!

‘Cursed To The Pyre’ is out now and available on High Roller Records. A superb slice of Blackened Death Thrash, I’ve no favourite tracks, the whole album is an experience and a half. If you like Black ‘n’ Thrash you’ll love this!

Church Of Misery Bring Doom To The Garage