People go mad in the desert, the relentless heat attacking body and brain until both are reduced to a gloopy stew. Sky Valley Mistress know this only too well as they travelled from their home in Blackburn to the hot and unforgiving otherworld of Southern California.

To mis-quote Dorothy in ‘The Wizard of Oz’: ‘’We aren’t in Lancashire anymore Toto’’.

Fortunately, they were there to record their debut album with Eagles of Death Metal / Queens of the Stone Age six stringer Dave Catching at his legendary studio in Joshua Tree and the unique atmosphere perfectly captured the voodoo in their music.

The nine life-changing and thunderous tracks therein spoke of an untamed power that both wraps you in a warm blanket of aural delight but also pours gasoline on the primal fire of rock ‘n’ roll. It’s down, it’s dirty and it’ll take you to a place that sees two moons hanging in the sky whilst you sit in the passenger seat of a rusty Buick that’s had a jet engine welded to it, your emotions flicking between elation and fear as you can’t control the beast you’re strapped into.

Pausing in their bid for world domination was somewhat forced on them with the arrival of Covid 19, but they have used this time wisely to fulfil a long-term ambition.

Eschewing the widescreen drama of the album, the quartet dug out a tambourine caught at a Scala show a few years previously as Nine Inch Nails frontman Trent Reznor tossed it into the crowd and finally put it to use themselves.

Their pared down version of ‘Every Day is Exactly the Same’ catches the zeitgeist and the stunningly simple but effective video that accompanies it has been gathering plaudits from all over the globe.

We caught up with drummer Newsome to discuss life during lockdown, the new single and album and his growing obsession with one of the most widespread gateway drugs to gambling that affects young and old across the nation: bingo.

MetalTalk: First off, how are you all doing?

How have you been keeping yourself busy during lockdown?

We’ve all been using the time to do things outside of music, like Russell’s spent nearly every day doing online tanning bed classes. No idea how they work… Starsky’s just finished filming the infomercial and getting the patent for his Secret Saucey Sauce and Kayley’s just been sitting in her bathtub.

It seems like the current global situation seemed to be the perfect time for you to release your version of Nine Inch Nails ‘Every Day is Exactly the Same’. Was the track something you’d wanted to do from the moment you first heard it?

Yeah we’ve all been NIN fans since forever and we’ve wanted an excuse to cover one of their songs for a long time and this obviously seemed like the perfect song to do and the perfect time to do it so that’s what we done did.

The video is very striking and it seems as though you really made something outstanding with some very clever usage of what you had to hand. The stripped back nature of the track itself is also a change from the material on the album. Was it a conscious decision to tie the audio and visuals together in this particular way?

We definitely made the conscious decision to take the dense industrial sound and almost empty it into a sparse landscape because it musically represents what’s happening in every town and city across the world right now (or at least should be…).
With the video we really weren’t interested in shooting ourselves in our front rooms on a webcam and when you’re forced in a situation to be creative that’s when the best stuff can come out and in my humble and completely factual and unbiased opinion, I think Kayley did a killer job.

You recorded ‘Faithless Rituals’ at Rancho De La Luna, Joshua Tree, California and it really has that perfectly sand-blasted, slightly eerie but earthy vibe to it that the studio is renowned for. A long way from your home in Blackburn, what was it like going over there and how did you find working with producer Dave Catching?

Have you ever gone to heaven, looked God in the eye whilst he hands you a cold one and asks if you wanna jam at his party that night? That’s basically how it felt. He was just the sweetest, kindest host who went out of his way at every opportunity to make sure our time there was the coolest. We got to go the middle of the desert to play rock and fuckin’ roll, what else is there to say?!

The album came out as a really detailed package that was not only unique but went way beyond the usual presentation, including, as it did, a game based on ‘Blue Desert’. What was the thought process behind it all?

Well the record was taking a little longer to mix than we wanted and we got talking about how we needed to do something to make sure it was worth the wait for our fans. That’s when we came up with the idea and the main concept behind the game.

There was a while when we were going to self-release it and trying to figure out how to fund it was actually harder than coming up with the idea of the game itself. Then New Heavy Sounds came to us with a briefcase full of cash and said: “let’s do this.” We’ve always wanted to be the band that does things bigger, better and more bad ass than the next and New Heavy Sounds have basically give us the freedom to do that.

I hope we get to do another run of those records with the game, they were just perversely cool.

Your live shows are a very visceral experience and you must be missing that interaction you have with each other on stage and the audience. Have you been doing any online live shows or seen any good ones?

Yeah of course. Playing live is what this band does. I think nearly every band out there is having withdrawal symptoms from not gigging. Kay nearly had the police called on her the other day because she attacked her neighbour for not wanting an encore when she’d finished mowing her lawn.

It’s getting pretty serious. Like I said before, we’ve made a conscious effort to not do any live stream shows because as much as we all wanna see Starsky in some booty shorts playing guitar in his bathroom, it just isn’t something we think the world is ready for. We’ve seen a couple bands do some great stuff online, like I saw Buzzard Buzzard Buzzard do a great solo live set at the start of lockdown but we’ve been busy working on other stuff.

What do you think of the social distancing gigs, like the one that happened in America recently (229 people in a 1,100-seat venue) or the thought of large-scale drive-in gigs as has been announced by some promoters?

Weird. Cases definitely aren’t going down so it’s all a bit too soon to us. It might seem kinda strange but as a fan when I go to a show, I want that really hairy shirtless moist guy to rub all of his gross sweat on my leather and I want to have to neck my pint before the band plays their heaviest jam so it doesn’t get knocked out of my hand and I want people dancing and jumping around me so I can barely keep my balance and see everything.

Without all those kinda things there’s no vibe to the show. I mean it might work great for some laid-back music people can sit down at tables and appreciate it far away from each other but not rock and roll.

Have you had to change your way of writing material due to the lockdown?

A little bit, usually we get into a room together and we all stand around Starsky to keep him warm and then he’ll lay his egg and we crack it open and listen to whatever the bird inside starts to sing so we know what to play.

Now we’re taking WAY less acid and we’re coming up with ideas on guitars and sending each other demos and stuff. It’s cool but it just feels a little less organic, y’know?

Do you keep in touch with your fellow bandmates much?

Oh yeah, everyday! I’ve had like 40 pictures today from Russell of his new drum machine accompanied with messages like “this guy doesn’t need to stop at a services every 20 minutes driving back from a show” and “this guy doesn’t help himself to my tortilla chips and dips without asking even though he’s got his own”.

I don’t think we’d last a day without each other to be a best friend to!

With the album coming out in March, around the time the world changed in the UK, it must have thrown a spanner in your plans for promoting it. What plans have you had to alter this year?

Fuck yeah it did. Our record came out the weekend lockdown was announced which meant we had to cancel a UK tour and there were some strong talks of us going out to Germany and Europe over the summer.

It isn’t all bad, I’ve got a really good moisturising routine going and I can already tell my skin is so thankful for it. You just gotta take the rough with smooth, baby.

How do you think the music industry will have changed after this period of lockdown?

I know the grassroots level is going to struggle seriously hard because it already has been. There’s so many venues that have already had to close which is devastating. But every part of the industry is struggling.

The government has just announced the rule that venues and theatres can open without any live acts too which is about as useful as an ashtray on a motorbike. It’s looking pretty bleak and hard to predict but it doesn’t mean we’re going to stop making music ready for when we can go again.

What plans have you got for when the isolation finishes and gigs start back up again?

Spend every second I’ve got watching shows and playing shows until I’ve had so many hairy shirtless moist guys rub their sweaty on me. I mean…?

‘Faithless Rituals’ has created quite a buzz already but where do you imagine or hope you’ll be in five- or ten-years’ time?

Playing sold out arenas around the world and if we’ve still got to the ‘social distance’ thing then we’ll play on the moon.

How can people support you during this time?

Go to www.skyvalleymistress.com and stream/download/buy everything you can. Lockdown has given me a serious online bingo addiction that I CANNOT afford to sustain. Bless you in advance.

With that cheery farewell he was off.

Sky Valley Mistress may have had to put things on ice for the moment but without doubt they’ll be one of the first bands out of the gate when the world returns back to normal…but only if they can manage to tear their drummer away from the lure of the numbered balls. 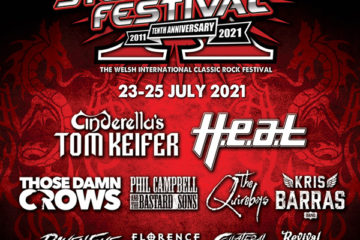