Following on from a successful trio of live dates last year, Ritchie Blackmore has once again plugged in his Fender Stratocaster and reacquainted himself with the Deep Purple/Rainbow back catalogue to venture out on another clutch of dates.

Blackmore’s tour itinerary this year included a headline performance at London’s Stone Free Festival followed by a duo of arena shows in Glasgow and Birmingham and it was at the Glasgow show that we caught up with him and his merry band of musicians.

The support act was Mostly Autumn, a band heavily influenced by seventies progressive rock and this was a five-piece version, reduced form their usual seven, as explained by vocalist Olivia Sparnenn.

More used to venues of between a couple of hundred to a few thousand people it was certainly the biggest audience MA have played to in some time – or rather it would have been if half the audience had actually bothered to enter the arena earlier. As it was, the bars outside were bulging whilst Mostly Autumn performed in front of a more modest rather than packed out crowd.

They had great sound throughout their set and highlights included ‘Only The Brave’, introduced and sung by guitarist Bryan Josh, and ‘Evergreen’ which showed a softer side to the band with simple guitar from Josh and the soulful voice of Sparnenn front and centre before the drums of Alex Cromarty and Iain Jennings’ keyboards kicked in to fill out the sound.

‘Silhouettes Of Stolen Ghosts’ was a simpler piano and vocal arrangement which showcased Sparnenn’s fantastic voice with a sympathetic accompaniment from Jennings. Their last number, ‘Heroes Never Die’ had the vocals shared between Josh and Sparnenn in what was an upbeat guitar driven finish with a heavier section towards end thanks to the beefed up sound courtesy of Cromarty.

The band may not have been everyone’s preferred choice of support band, but they were afforded warm applause as they took their final bows and left the stage, paving thet way nicely for when they return to Glasgow in November, as part of a larger UK tour. 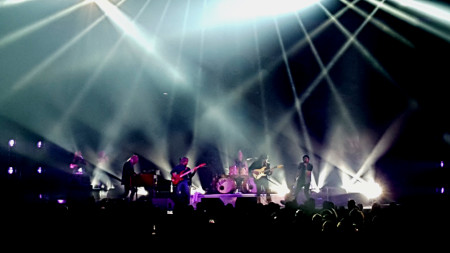 If you’re from Glasgow and an older fan of Ritchie Blackmore’s work, then Wednesday 9th November 1977 could well be a date long in your memory.

It was, in fact, the last time that Blackmore trod the boards on a Glasgow stage and nearly forty years later, he has seen fit to return to the city. Sure, he’s played Edinburgh a couple of times since then, most notably in 1983 on the ‘Bent Out Of Shape’ tour and most recently in October 2015 with Blackmore’s Night, and having missed out last year it’s good to see Scotland afforded the opportunity to see this current incarnation of Rainbow on stage on what could potentially be a last chance to see him live.

Touring under the name Ritchie Blackmore’s Rainbow seems to have some internet keyboard warriors in a state of uproar, but at the end of the day he can call it what he likes. This is as much a new version of Rainbow as it was when the versatile (and hugely under-rated) Doogie White served as frontman back in the nineties, or when Graham Bonnet or Joe Lynn Turner spearheaded the band in the late seventies/early eighties, whether the hardcore “it;’s not Rainbow without Dio on vocals” brigade like it or not. In fact, the pull of the Blackmore name coupled with the promise of a trip through the Rainbow and Deep Purple back catalogues ensured a nearly sold out house in the 13,000 capacity Hydro.

Having not been back to the venue since Iron Maiden’s performance in early May, which was dogged with sound problems, I was hoping this show would be incident free, and on the whole it was. With no new album to push this was always going to be a trip down memory lane for the older members of the audience and as the band made their way on stage to ‘Land Of Hope And Glory’, they were greeted enthusiastically by the audience, although an image of the Union Jack on the large screen was met with booing from some sections of the audience. 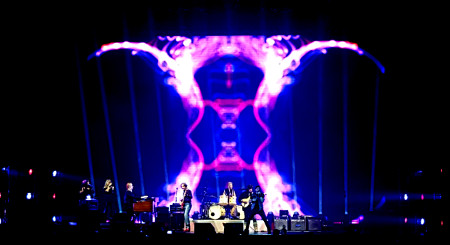 In time honoured fashion, the sound of Judy Garland’s voice coming through the PA (“We must be over the rainbow, rainbow, rainbow”) signalled the start of the show which wasn’t vastly different from their set last year, but this time around it was much more Rainbow centric with seven Deep Purple numbers included along with ten Rainbow songs.

Blackmore had surgery on his left hand early last year and some critics at the time complained about some less than fluid playing from him, but this year there was no problem as he played exceptionally well throughout the show which lasted the nearly two hours. The only real issue was the rest of the band – you have to remember that Rainbow are a rock band and a hard hitting one at that, however, the band he’s surrounded himself with seem to lose the hard rock element and were a bit more laid back than expected.

Drummer David Keith (who also plays in Blackmore’s Night) simply doesn’t have the power that some of the past Rainbow drummers have had, leading with a somewhat underwhelming drum sound throughout the show. Bass player Bob Nouveau (another Blackmore’s Night member) did a solid enough job however, keyboard player Jens Johansson (from Finnish Power Metal band Stratovarius) played his parts to perfection – although his extended keyboard during ‘Difficult To Cure’ was longer than it needed to be and the crowd got a bit restless towards the end, to say the least, with one woman even shouting: “We paid to see Ritchie!”

The real gem in the band has got to be frontman Ronnie Romero (who is also the frontman for Spanish Metal band Lords Of Black) who has been handed a real opportunity to show what a truly excellent singer he is. His ability to sing songs from all eras of the Rainbow back catalogue was the reason he got the job in the first place, and his vocals were pretty much flawless throughout the set, despite occasionally missing his cue and the soundman forgetting to turn his microphone on on one occasion, leaving a few lines unheard. 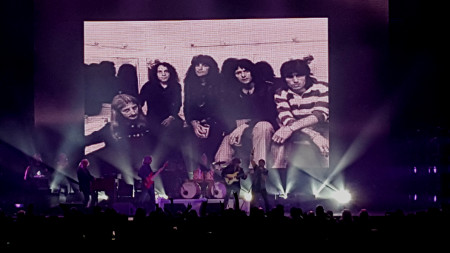 Highlights from the set included an impressive version of ‘Man On The Silver Mountain’ which had pictures of past Rainbow line-ups displayed on the large screen with cheers going up every time Ronnie James Dio’s image was displayed, followed by ‘Sixteen Century Greensleeves’, an unexpected but very welcome addition to the set.

Romero’s vocal performance during ‘Child In Time’ stretched his voice to the limits but he pulled it off unscathed whilst he and Keith ingratiated themselves by wearing Scotland football tops during the set, a move which was roundly appreciated by the audience. Blackmore seemed to be enjoying himself, encouraging the crowd on to get involved several times during the show and only occasionally leaving the stage.

The party atmosphere was heightened during ‘Long Live Rock N’ Roll’ with the whole place going wild, boisterously singing along during the chorus and exuding yet more cheers as Dio’s image once again appeared on large screen at the back.

Another unexpected addition to the set was ‘Temple Of The King’ which was sandwiched between two Purple classics, ‘Black Night’ and set closer ‘Smoke On The Water’ with the former testing the audience’s patience once again with a drum solo mid-song before the latter closed off the night in fine, if predictable, fashion.

Tonight was a dream come true for the younger members of the audience and a trip down memory lane for older members but it seems to be the latter who went away disappointed, whilst the former were maybe a bit more forgiving.