Commemorating the 40th anniversary of arguably their most famous album ‘Agents Of Fortune’, Blue Öyster Cult have chosen to take a slightly different approach.

Instead of merely remastering the original album with added extras, Blue Öyster Cult chose to play the album from start to finish during an exclusive concert for the Audience Music Network at Red Studios in Hollywood in front of an intimate audience of invited guests, and put that out.

As we will see, this has it’s pros and cons.

The good news is that Blue Öyster Cult haven’t lost the ability to play these songs even after more than 50 years on the road. BÖC main-man Buck Dharma is still in fine form even at 72 and a real treat is the return of original BÖC member Albert Bouchard for a few tracks.

If anything, hearing the album in it’s original running order is a reminder just what a fun and quirky group of song-writers Blue Öyster Cult have always been. 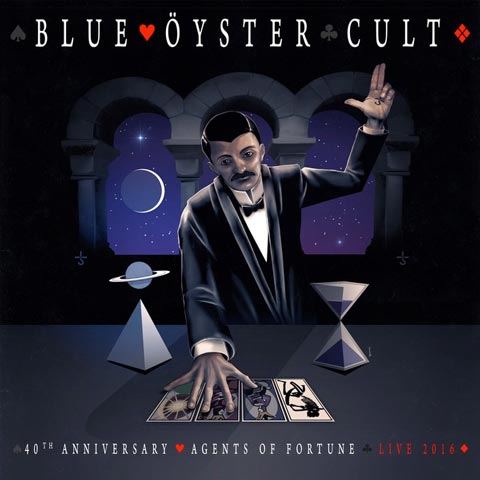 ‘True Confessions’ bounds along with a happy go lucky beat and piano that you really wouldn’t expect from the people who wrote ‘Don’t Fear The Reaper’.

Speaking of their most famous number, its here in all its gothic glory, although ironically the cowbell is too low in the mix. This track, more than any other, also shows the band’s age coming through on the vocals.

It’s not a bad thing, just a fact of aging gracefully and their courage to avoid tapes and other studio trickery should be applauded.

‘The Revenge Of Vera Gemini’ is a compelling, hook heavy, mid-tempo Rocker and one of the highlights of the album.

At the same time, ‘Tattoo Vampire’ showed that the band were not afraid to occasionally speed things up.

At just under 40 mins long and with nothing in the way of extras, it’s not exactly the most generous of anniversary celebrations, although it was released as a CD+DVD package, so it is good for you car and TV.

A collection of B-sides or maybe even live rarities would have been more than welcome, but then again BÖC hardly lack for compilation albums.

That being said, for a band that has had a subtle, but lasting influence, on many of today’s more successful Rock and Metal bands (see Ghost), its a fine reminder as to the origins of that keyboard heavy, solo driven sound. A solid effort.