After the massive success of their CD version of ‘Age of Wolves’ last July, which has all but sold out, Arkansas’ ‘Pantheon’ return with the vinyl edition of the album, which comes with two bonus tracks.

The band told MetalTalk: “‘Age of Wolves’ is an intricate merging of heavier, mid-paced poundage with the older, fast-paced Death/Thrash character. Its Old School styles will feel familiar and nostalgic to veteran Metal fans, but does it in such a way that it feels new and fresh.”

Not an idle boast either, I love ‘Age of Wolves’ end to end, particularly the way they have included a touch of Groove, combined in such a way with the other elements that it manifests as a compelling and at times fascinatingly convoluted, hugely varied and exciting listen. Occasionally there is a distinct nod to Dissection in the sound, which I love. 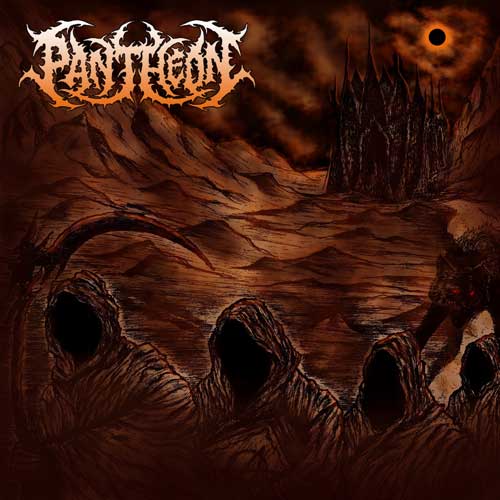 The vocals are excellent, too, mostly a gravelly growl that has clarity of content, elevating to a blackened vitriolic snarl. Composition and musicianship wise I can’t fault this album. It delivers excellent melodies, superb riffs, and the drum work is pretty tasty too.

‘Age of Wolves’ vinyl version is, including the bonus tracks, ten tracks that span forty-seven minutes, which right from the offset is a hugely powerful offering. Opening track ‘Serpent Death Cult’ is a solid and compelling track that packs a punch but with a subtle melodic side, firing you up for the rest of the album, which doesn’t disappoint either.

As previously mentioned, the vinyl comes with two bonus tracks, both a couple of seven-minute monsters. Firstly ‘Arcane Oath,’ a dark plodder which weaves a convoluted path, and secondly, ‘Hand of Doom’ a Black Sabbath cover from their 1970 masterpiece ‘Paranoid’. A brave track to cover given the legendary status of the original, Pantheon stays true to that original. Still, they add an interesting raw and punchy slant to the track, particularly in the vocal department.

‘Age of Wolves’ will appeal to fans of band like Dissection, Carcass, At The Gates, Dying Fetus, or pretty much anyone who loves a well delivered, well varied, utterly fascinating, mid pace chunk of Blackened Death/Thrash.