We left Pittsburgh at 11:30 for a ‘short’ five hour journey to Sellersville. It’s still lovely and sunny but I can detect a lowering in temperature as we make our way east.

We amused ourselves by playing the A-Z of band names, Dean and myself were neck and neck leaders right up to the letter ‘U’, then Brian made a late rally with the X, Ys and Zs to snatch second place from Dean but not quite enough to dislodge yours truly from the gold medal position… ave it!

We arrived in Sellersville around 16:30 and the venue is a lovely theatre with great staff and the awesome hospitality was probably the best so far.

However, after soundcheck we returned from our meal in the restaurant next door to find that they had put tables and chairs in the space between the stage and the first row seats, a space of about twenty feet, which they then charge extra to sit in. This doesn’t bode well for a classic Diamond Head gig. To quote Ras, “someone missed the memo, this is Metal!” I also then find out the t-shirt nazis are out in force, with a 10% theft charge on all merch sold.

One song into the set and our worst fears were confirmed with the ‘posh’ seat clientele rooted firmly on their backsides. At the first available opportunity, after ‘Lightning To The Nations’, drastic measures had to be taken.

What happened next was classic Ras and is captured on the third and final episode of the ‘Evil In America’ video.

He plonked himself horizontally on the stage and proceeded to serenade the lifeless VIP’s with “you don’t ever buy me flowers” a la Jim Carrey, and demanding they stand up before he came down and stood on them and roared: “Are you in the mood for Heavy Metal?”

Not surprisingly the answer was affirmative and normal service was thankfully resumed with everybody firmly on their feet. Now that’s how to play a crowd!

Next up is the Fish Head Cantina in Baltimore and en-route we got a message from John Gallagher of Raven saying he would be at the gig tonight, and with the guys having toured the US with Raven in 2013, they were looking forward to catching up with him again.

The stage was semi outdoors when all the side shutters were open and separate from the excellent food cantina next door where some of us enjoyed the excellent sushi on offer whilst others settled for the more regular diner fayre and with Blue Moon on the rider this was shaping up to be one of my favourite gigs.

With the place almost at bursting point, the third support band finished their last song and as Brian entered the side door coming back from the van, the singer excitedly pointed out to the crowd that the one and only Sean Tatler had just entered the room! This gave us great banter fodder for the rest of the tour, something which Brian took in his usual jovial way.

The band stormed through their set with Ras like a raging bull on Red Bull. This guy would have a crowd of anorexics eating out of his hand, and at one point whilst standing precariously on the barrier, one of the young ladies at the front had her hands full so to speak as she grabbed the unsuspecting fella right between his legs!

I suppose there’s nothing like a hands on audience!

This was to be Abbz’ final gig of the tour due to commitments arranged before the tour was announced and he was determined to enjoy himself, easily breaking his own foot stomping world record.

We had another #amievilface winner tonight. Chris from Baltimore received his signed goodies from the band and now goes through to the grand finale draw at the end of the tour.

The next morning signalled a run of three New York State gigs starting in Poughskeepsie, and we headed to Newark airport to sadly drop Abbz off and say our goodbyes and as he headed off, guitar in hand. Ras and Dean serenaded him with the Chicago classic ‘If You Leave Me Now’, much to the amusement of passing travellers.

With the band down to a four piece it was time to shake the set up again and with the venue being another lovely theatre with a great big balcony we decided again to film the gig. Above the door the gig list showed that yesterday a familiar name played the venue. Yes, you guessed it, Flotsam and Jetsam had been in town.

The next morning we woke up to a blanket of snow though our journey into New York City saw it all but disappear by the time we got to Webster Hall. This was to be Mike and Julie’s last gig of the tour.

There are two rooms at the venue and tonight we were in the basement which doesn’t cater for the disabled, so getting Mick down the albeit short but narrow flight of stairs was a challenge to say the least, a challenge that was no easier going the opposite way at the end of the night.

After the gig, we travelled a couple of hours north back to the same hotel as the previous night. This would give us a head start in the morning on our journey to Rochester, which in hindsight would prove very prudent indeed. Like I’ve said before, this is a very well organised and thought out tour.

The next morning we again woke up to a blanket of snow, and as Brian was the only one to make the breakfast call (I don’t recall him missing one yet) we decided to have brunch at the Red Line Diner. The breakfast was great but the highlight for me was listening to the waitress repeatedly asking would we like more “cwaffee” in her best Sopranos twang.

We set off just after noon and the further north we got the worse the snow became, and before long we were in a fully blown snow storm. To put the journey in a nutshell, it took seven hours of nerve wracking driving for Karl ‘The Machine’, with just two short restroom stops. There were four accidents along the way and to emphasise how bad the conditions were, even a State Trooper (police) 4×4 station wagon found it’s way into a ditch.

We arrived at The Bug Jar to be told two of the support bands had cancelled due to the weather and by the time we had set up, the third support band cancelled too.

So to re-cap, Diamond Head can drive for seven hours in treacherous weather conditions to play for their fans but three local support bands couldn’t make it across town… go figure.

The gig was great and the crowd, which included a cheerleader, were mental.

One guy took it upon himself to be the ringleader and was roaring before and during the gig “what are we here for”, to which the crowd roared back in their loudest proudest voices, “Diamond Head!”

After the set, I joked to Ras that we should kidnap the guy, throw him in the back of the van and take him to the rest of the gigs, to which the guy replied: “Do it, do it man, I only need apples and bread.”

Shame we were right out of apples and bread! 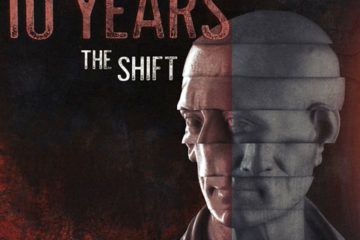