After the Vegas gig we arrived at our hotel, the famous Golden Nugget on Fremont street, which is one of the oldest casinos in the city and looked like something out of the movies, and indeed it is, having featured in the James Bond film ‘Diamonds Are Forever’. Very apt! Also the Fox TV series, ‘The Casino’, was based on it.

The theme of the hotel is the gold rush and situated in a glass cabinet in the casino is a huge golden nugget. In fact, up until 2013 the largest golden nugget in the world, ‘the hand of faith’, was displayed there. The hotel also boasts a swimming pool with a waterfall and a shark aquarium that was featured in the TV series ‘CSI: Crime Scene Investigation’.

It was now three in the morning and just as I got to my huge room, a text came through from Ras saying “let’s have one drink!”

Well I suppose you can’t go to Vegas and not have a drink in the casino, so we met at the bar and actually had three, a couple of bottles of Michelob and the biggest jägerbomb in the world!

We chatted to a few interesting people who liked our ‘London accents’! Well they weren’t far off… I’m from Merseyside and Ras is from Denmark!

It was now five in the morning and with a van call at 11:30 it seemed prudent to get some shut eye.

We left Vegas for San Diego on a journey that should have taken five hours but unfortunately ended up taking us seven hours due to a multi car accident that looked pretty grim when we eventually passed it, with badly damaged vehicles strewn all over the hard shoulder (probably not the correct term) and one on its roof. We can only hope there were no fatalities.

We arrived at the venue at 19:00 after another great effort from Karl in the driver’s seat. We loaded in and set up in record time and got a nod and the thumbs up from the stage manager but unfortunately we didn’t have time for a soundcheck as the doors had already opened.

Mick and Julie arrived and took their place at a table that the venue staff had reserved for them. It was a nice touch.

This was to be the final night of the Coffin Dodgers’ tour and they arrived during the third support band’s set.

All three bands were pretty cool but the one that caught my eye were the first band of the evening, the excellent Dolan Brotherhood.

They describe themselves as a band with weighty power oriented riffs intertwined with odd tempos, harmonies and fiery solos. I get the odd tempos bit and that does it for me. I’d describe them as a solid kickass live band.

Afterwards I complimented James the guitarist on the band and the set, and he duly furnished my palm with a CD & T. Thanks James.

It was a real humid evening in San Diego and by the time Diamond Head had powered their way through another intense, all too short ninety minutes the walls were literally weeping!

After the set Ras was still a bundle of energy so I challenged him to do fifty push-ups. I changed the count at forty-one back to thirty-one so he probably did around sixty. Pretty impressive!

With everything taken down, the stage cleared and the van ‘tetris like’ packed, it was time for a group photo and to say goodbye to the Coffin Dodgers, two of whom I will probably see in the not too distant future, the other two, well who knows, I hope they can make it to the next LA gig on December 2nd.

I just hope it won’t be something like another five or six years or whatever it’s been. Like what Matt said… “It’s been emotional”.

“Without Diamond Head, none of this would have existed…” Lars Ulrich – Metallica 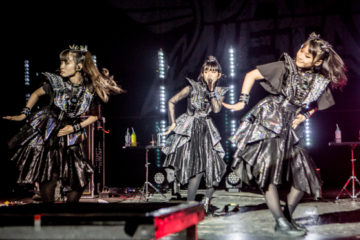