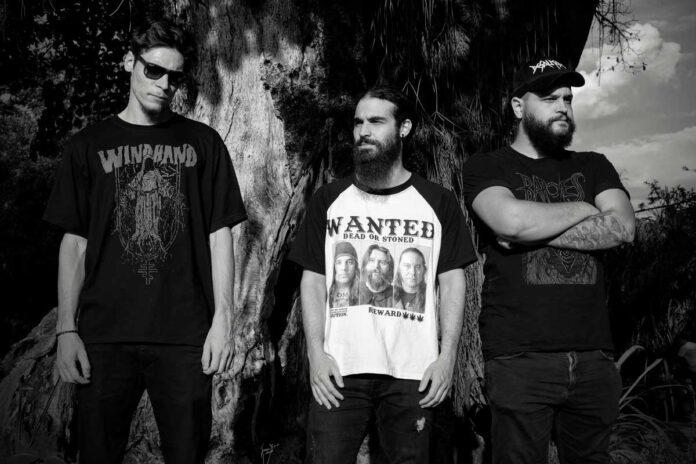 Lurking deep within the Brazilian underground Metal scene, Los Suffers have emerged to release their debut album, Quando a Chama se Apaga. Six tracks of heavy melancholic fuzzy, sludgy Stoner/Doom Metal that reflect in its lyrics the accumulation of dark feelings kept inside of those who struggle daily for their survival in an unjust and cruel world.

Formed recently, in 2019, with their initial musical inspirations coming from bands like Monolord, Electric Wizard, Sleep, Saint Vitus and Windhand, but over this brief time frame, their sound has evolved further into something that reflects their style more.

To date, they have released two singles and a split in 2021 during the pandemic, and with Quando A Chama Se Apaga, they are securing their place in the Brazilian underground Metal scene.

The trio, as in previous works, “take a stand against fascism again, vociferating hatred against the fascists, the bigots and the hypocrites.” But the new release also encompasses deeper and more introverted feelings, delving deeper into sadness and depression, exploring the acceptance of death and the lack of hope “because Evil does not exist and Goodness Is a lie.”

Quando A Chama Se Apaga is a classically heavyweight Doom offering six tracks spanning over fifty minutes of playing time. Opening on Sepulcro, an atmospheric soundscape of thunder and tolling bells, heralding the arrival of Morte Em Paz, which takes a bleak but forthright look at loneliness, sadness and the peace found in death. The mood is reflected in the initial and predominant funereal pace of the fuzzy guitar work and slow militaristic drum delivery with a mix of clean but tortuous vocals and a harsher delivery.

Doom Against Fascism is fairly self-explanatory in its title and opens on a crushingly oppressive repeat, gradually building in pace, weaving around the drum work, which delivers some interesting fills adding to the overall texture of the track. The tempo also takes a surprise upturn in pace and groove in the second half. The vocals become rawer and deeper, adding a different element and keeping things interesting on a lengthy track.

On Jack Tall Black, a much more up-tempo number, hypnotic, groovy and sludgy and one of the shorter pieces, lyrically compact but one of my favourites, it cruises along nicely with a mid-point and latter half shift for added interest.

Stoner Mass takes the tempo back down to a crushingly fuzzy doomy pace, another rather good track with a very hypnotic quality. The final track, Lúcifer, is very reflective to open, with low clean vocals which become rawer and harsher as the track progresses, adding an increasingly ominous tone to the meandering but engaging sound, closing on the thunder and tolling bell, as it opened.

As debut offerings go, Quando a Chama se Apaga is a promising start. It will be interesting to see where they take their sound as it develops further.

The album is available to buy as a digital album from their Bandcamp page.