When I quit Stage Miracles in 1995, I somehow forgot all about Iron Maiden. I knew there had been various changes, as Bruce left to be replaced by Blaze and Adrian by Janick, but in reality I lost track of what was going on in the music business. My new job at Royal Mail was taking up a lot of my time, and a breakdown of my first marriage found me moving from home to home. Music was the last thing on my mind.

So what changed, I hear you ask?

I guess the easiest answer is technology. Once I had settled down with my new wife, Sharron, I bought my first computer. I had no idea what I was going to do with it but being connected to a very slow dial-up internet service, I started to find some old friends. A few years later Facebook came along and changed everything, as old friends started to find me.

One of those people was Dave Lights. He told me that Maiden were going to play at the O2 and he was thinking of going. He gave me Vic Vella’s phone number and told me to contact Vic for passes, which I did the following day.

Vic became the go-to guy if I needed passes for any Maiden event, and that got used, but never abused, quite a few times over the next few years.

My name, plus one, was added to the guest list for Saturday August 6th 2011. The day arrived quickly enough, so Sharron and I made our way to the O2. We collected our passes, and I thought it was just going to be a ticket for the show. Typically, I was wrong. There were also hospitality wristbands for before and after the show. Hee hee! Free booze! I think I saw some food there too, but it was free booze, so who cares?

I met up with a few old friends from the early days, including my old boss Doug Sampson and his wife Barbara. My old friend Pippa Lang was there and was spotted by Bruce during the show, as he pointed to her and said something about the “lady in white”.

I didn’t get to see any of the band before the show but I did catch Steve in the hospitality area after though, albeit very briefly. I had enough time to thank him for the passes, before he was whisked away to talk to somebody more important.

The show itself surprised me. I could now see how far the band had come, as from my position high up in the Gods and watching the other twenty thousand fans going crazy, I felt proud and also glad that I had caught up with the biggest and best Metal band on the planet.

I have to admit, I was so far behind the times I didn’t have a clue about most of the set, but knew the classics, like ‘2 Minutes…”, ‘The Trooper’ etc. The encore was easy to enjoy as I knew what Maiden were playing, but of course they were playing a lot of stuff from ‘The Final Frontier’, and as I said before, I had fallen behind, and was totally oblivious to at least two or three albums that came before it.

Overall, I thoroughly enjoyed the experience. It was good to have a quick chat with Steve, and just as good to spend the evening standing next to Doug, as we chatted through the songs we didn’t know. That might annoy some people, not that we cared. We were catching up on the past thirty years.

The original columns, published between 2014 and 2016, led to the hugely popular ‘Loopyworld – The Iron Maiden Years’ book, which you can buy from eBay. 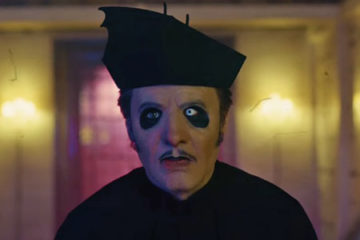