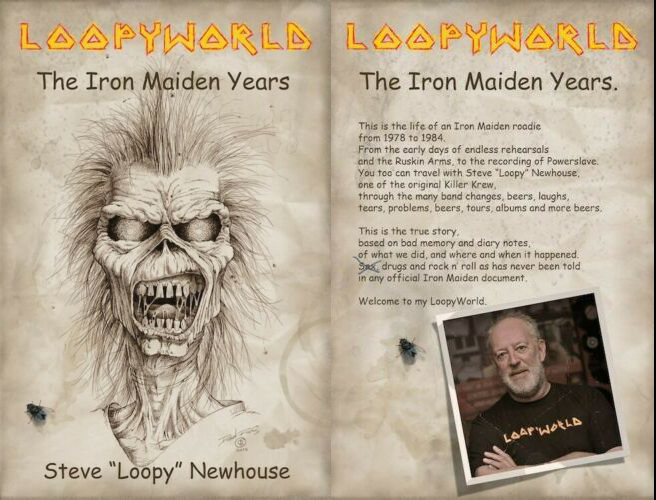 I met up with another ex-Killer Krew member, Chris Lang, at Manor Park station for Clive Burr’s funeral. I hadn’t seen Chris for quite a few years, but we found each other on Facebook and he hadn’t changed a bit, although he was slightly chubbier.

Working outside the music business was either agreeing with him or sitting in a crane 100 feet above cargo ships at Felixstowe was taking its toll. We will never know. Sadly Chris passed away last year from a heart attack, and I will miss him a lot.
But he also played a big part in my reunion with the band, and I will be forever grateful. The story goes like this.

Shortly after Clive’s funeral, I got in touch with Dennis Stratton and he told me that he and Dave Edwards were playing at the Crown in Hornchurch on the first Sunday of every month, something he still does now. I had been to see them quite a few times, and knew what to expect, but this was an opportunity to do something special, so I got on the phone.

As the first Sunday of May approached, I received a call from an old friend, and he had a surprise up his sleeve. This was going to be great. I was excited to be seeing an old friend, but until the day arrived, I had no idea what he had planned.

On the day itself, I was sitting at the back of the Crown having a cigarette, when two cars pulled into the car park. Nothing unusual about that, but what I saw next blew me away.

I expected Doug Hall, as we had spoken a few times in the weeks before, but he brought Michael Kenney with him. I greeted them both and we had a few friendly photos taken, then I took them both into the pub to meet Dennis, as neither of them had seen him since 1980. It was also the first time that we had all been together since the end of the Kiss tour.

Den was almost in tears to have three of his old crew around him, but the show had to go on. 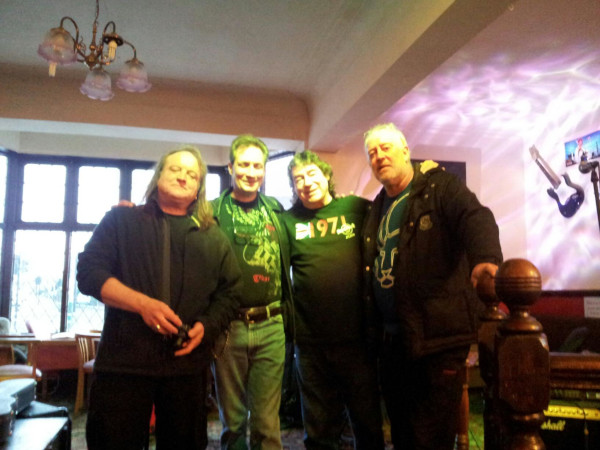 By this time, Doug no longer worked for the mighty Maiden machine, but Michael still did, and still does. I sometimes wonder if Michael is trying to outlast the band in the hope of a better pension…

If you ever get the chance to see Den and Dave at the Crown Inn, Hornchurch, they do a great version of ‘Phantom Of The Opera’.

What made me laugh this particular evening, as the guys played the opening few notes, was Doug looking up from his phone and saying, “Oh oh!” He knew from experience how this song could go wrong, as we had both heard the cock ups that had been made many times.

And not by anyone in particular, as they all played their part. Missed timings, wrong verse, out of key, in fact you name it, we heard it.

But of course, Den and Dave had had plenty of time to get it right and did it perfectly for a very grateful and appreciative crowd. It was a great night and we all said our goodbyes.

Unfortunately, Chris Lang couldn’t make it to the Crown due to work commitments, but a few weeks later he got in touch with me and asked if I wanted to go to Download at Donington with him. He had arranged parking, so all I had to do was get in touch with Vic to get some passes organised, and again Vic obliged.

A few weeks after that, we shot off up the M1 and three hours later arrived at the festival site.

The first person I saw backstage was Michael Kenny. He had that look on his face that said “this bastard is stalking me”. He pointed us in the direction of the band’s hospitality tent, and that’s where we ended up for the best part of the afternoon. Good choice too, because it absolutely pissed down for about forty minutes.

The Maiden hospitality marquee was quite a fair size but split into two. We were in the smaller Family And Friends section, where the drink was free. The bigger section was for management and record company boffins and they had to pay for their drink. I laughed at the concept, but then I thought, “well, they can afford it”.

Outside was a small grass area, which soon became a swamp and at the back of the swamp was a small trailer on wheels with ‘Rock n Roll Ribs’ on the side of it in Maiden style font. I had no idea what that meant at the time. I do now, but let’s not spoil a good tale.

After a few hours of waiting around, the band finally showed up and so did a few old friends, like Cod and Michael Goodchild, both of whom are no longer with us, but the banter I remembered from so many years before hadn’t changed a bit, and this was also the first time I had heard the terms ‘Fear Of The Duck’ and ‘Can I Play With Magnets’.

It was good to be back amongst old friends, but it was better to have a decent chat with Steve and Nicko. It was like we had never been apart. Just one big happy family, and I was loving it. 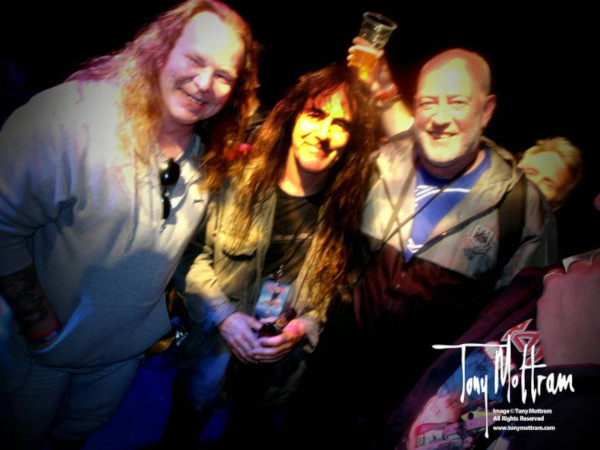 Now that the band were on site, the side of the trailer opened up and the smell of cooking took over. Now it was beginning to make sense, and when someone told me that this was Nicko’s side project, I was eager to taste his wares and I wasn’t disappointed. His ribs and coleslaw are probably the best I’ve ever had, even now, six years later.

Soon it was time to make our way out to watch the show, but before we went, somebody mentioned about watching the sky and sure enough, five minutes before the band hit the stage, a lone Spitfire buzzed the crowd, did a tight turn and buzzed the roaring crowd again. It turned out that the pilot was a friend of Bruce’s and it had taken ages to get the Health And Safety people to agree to having a low flying aircraft over a crowd of around 100,000 people. But it did happen, and I’m glad I was there to witness it.

The band crashed onto the stage after the usual rendition of ‘Doctor Doctor’, and crashed through the set so quickly that two hours had passed in what felt like two minutes.

Knowing that we still had a three-hour journey home, we returned to the hospitality area, but only stayed for an hour. That was enough time to thank Steve for the passes. His answer was almost like an open invitation to come back. “Anytime,” was all he said.

Tony Mottram appeared from nowhere with his camera took a quick photo of me and Chris with Steve, and as Steve was squeezed between the two of us, Harry put his arm around my waist, looked at me sideways and said “Fuckin’ hell!”

He realised I had put on weight, but I blamed him for getting me drunk in all those different countries. He laughed and said something along the lines of, “I might have known you were going to say that!”

After a fifteen-minute slog through the mud, we got into the car and followed the traffic to the main exit, where a guy in hi-vis was pointing everyone to turn left, but Chris was having none of it and turned right, with hi-vis man yelling that we were wasting our time.

With the Sat-Nav on, we did a load of back doubles and were on the M1 twenty miles further down with an empty road in front of us. I didn’t know what all the fuss was about, but I would have thought that high profile gigs like this would have people who knew what they were doing? Or is that too sensible?

The original columns, published between 2014 and 2016, led to the hugely popular ‘Loopyworld – The Iron Maiden Years’ book, which you can buy from eBay.

Previous article
NOT EVEN THE SEA BREEZE CAN COOL BRIGHTON TONIGHT; KILLING JOKE MAKE ABSOLUTE FIRE
Next article
TOP FIVE MUSIC FESTIVALS IN EUROPE IN 2020 THAT YOU SHOULD ATTEND

With Steve and Rod constantly pushing everyone to get things moving at breakneck speed, gigs were getting organised before the crew were ready. Then...

Home! Home again, I like to be here when I can.I felt like shit. My girlfriend had left me and I had nothing to...