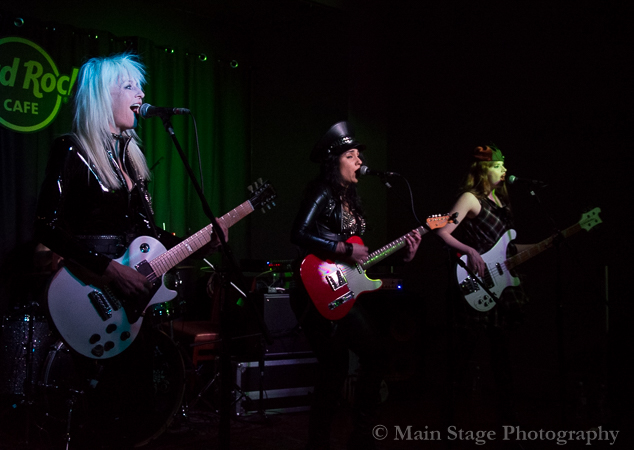 Glasgow’s Hard Rock Café is getting a solid name for itself as a live venue thanks to Shock City Productions who put on a number of different acts, original and cover bands, and it was the former that drew the MetalTalk team to the venue on a cold November night, with the promise of sets from Syteria (featuring Jackie Chambers from Girlschool) and US/Scottish group, Till Death Do Us Part.

First up was Till Death Do Us Part which features local hero Kieran Robertson and are fronted by Emily Tate, daughter of ex-Queensryche frontman Geoff Tate.

Till Death Do Us Part have actually toured the US supporting Geoff’s Operation Mindcrime outfit, however, this was actually the quartet’s first live show outside the US and, fittingly, it was a hometown show for not only Kieran but also bass player Jack Ross and drummer Lee Reston. 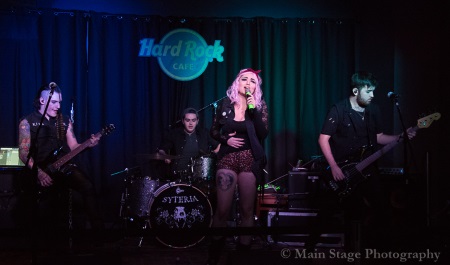 The band describe themselves as a “Dark Alt-rock group kind of like Depeche Mode meets Bring Me The Horizon with the expressive vocal flair of Kate Bush”, so not your average straight ahead rock’n’roll band that’s for sure.

They’ve already recorded and self-released an eight-track album, ‘Detached’ and have already spent time in the studio planning the follow up so it’s all systems go for the quartet and I was keen to see how their live show measured up. 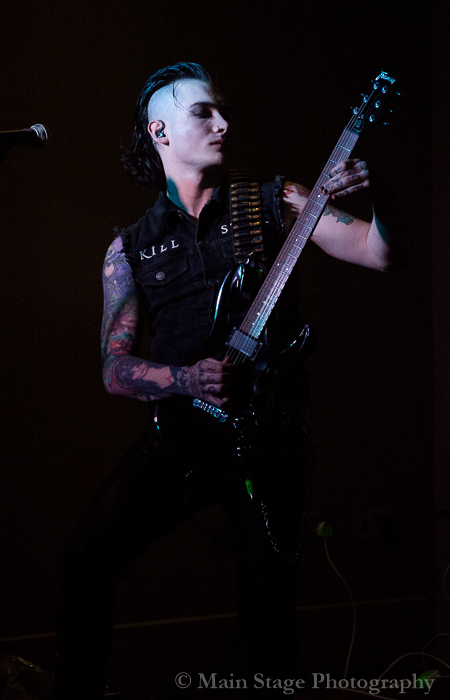 Musically they have done a lot together and separately, and their ability is second to none, which combines to make a unique but thoroughly enjoyable sound.

Emily seemed nervous at the start making a joke about being the only non-Scot among them but her nerves didn’t last long as she immersed herself in her performance. A girl of few words, she mostly let her vocals do the talking only occasionally introducing songs in a matter of fact way, never revealing too much to the audience.

As you’d expect, the set was culled from ‘Detached’ with one exception – a nod to her heritage with a version of Queensryche’s ‘I Don’t Believe In Love’ from their 1988 ‘Operation: Mindcrime’ album. Not an obvious choice of a cover maybe, but Till Death Us Do Part did the song justice with an accomplished version, and all credit to them for including it in their set because it’s quite a technical challenge to play. 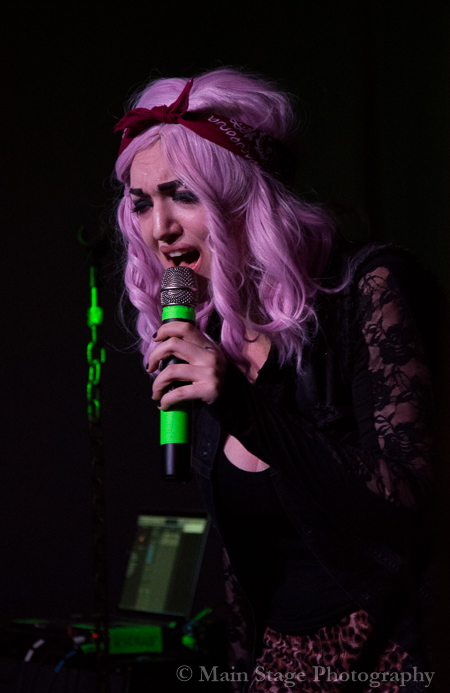 Of the original material, ‘Monster’ (written about an “asshole I once dated” explained Emily) was a great track early in the set. Kieran’s driving guitar was matched by Lee’s drum beat only abating when the vocals came in.

Unfortunately, Emily’s spoken word section the in the middle was drowned out except for the phrase “you’re fucking crazy” – that bit was heard loud and clear! – but that’s a minor point in an otherwise top track.

A duo of slower tracks, ‘Cannonball’ and ‘Run Away’ had Lee punching out the solid and simple drum beat on the former while Kieran and Emily traded vocals while enjoying the moment together. This was without a doubt Emily’s most heartfelt performance, which supplanted this track as one of my favourites from their own back catalogue.

Kieran stepped up for a blistering guitar solo during ‘Blue Boy’ which demonstrates what a prodigious talent he really is and there’s no doubt his career is still on a sharp ascendancy but at the same time you’ll never meet a more down to earth guy when he’s off stage.

The quartet signed off with ‘We Killed Romance’ which despite its title is a fairly and uncharacteristically upbeat number. 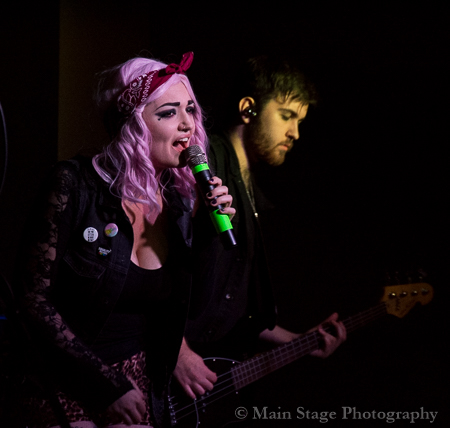 There no doubt about the talent in this band so I’d encourage you to check them out either online, by buying their ‘Detached’ release or seeing them live when they’re supporting Geoff Tate on his upcoming UK tour in January when he’ll play the ‘Operation: Mindcrime’ album in its entirety, on what will be its 30th anniversary.

Leeds based Syteria were formed by Jackie Chambers in 2015 and have been making big inroads on the rock scene throughout the UK ever since. Their first release was the ‘Wake Up’ EP in 2016 which was followed by their full-length debut album, ‘Rant-O-Bot’ earlier this year.

I’ve actually seen the band live three times now (twice in the space of a fortnight!) so I knew exactly what I was getting and I wasn’t disappointed again with a great performance all round.

From the get-go, there was certainly no lack of volume with the bass guitar of Keira Kenworthy and Pablo Calvo’s drums dominating from the start. 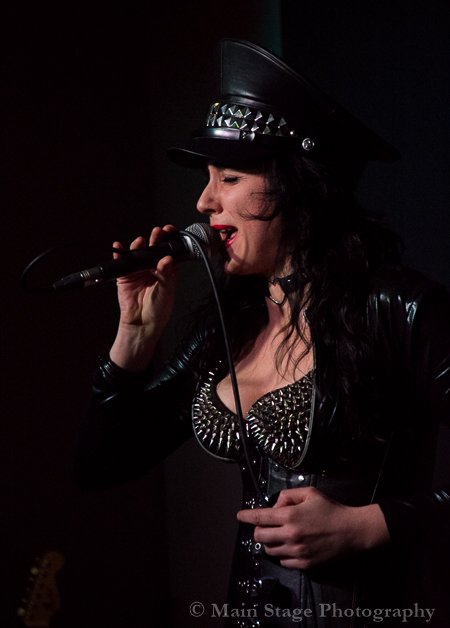 Like Till Death Us Do Part before them, Syteria’s set consisted mainly of their ‘Rant-O-Bot’ album with a sneaky cover stuck midway through. The cover in question was the Ramones ‘Rockaway Beach’ and it’s a real gem hidden away in the middle of their set.

They make this song their own and it never gets tiring no matter how often you hear it, and judging by the smiles on the band’s faces they enjoy it every time too.

As far as the rest of the set was concerned, it was very much a case of getting on with things and leaving little time for any in-between song banter from vocalist Julia Calvo.

Julia did her best to get the audience involved and was mostly successful but never more so than when she took an impromptu wander into the audience during ‘Get A Life’ which saw her at her most commanding as she strutted up and down the venue.

The vocal harmonies from all four band members throughout their set are a trademark of the band, but it’s never over-used, and always spot on – though never more than here. 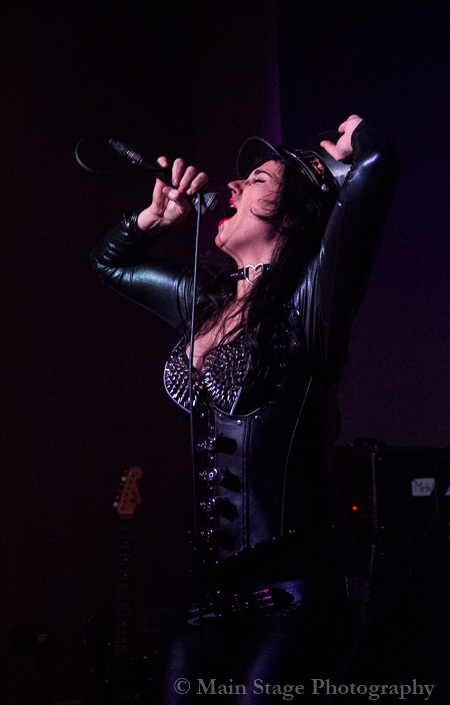 Keira (replete with tartan dress) took her cue from Julia during ‘Loner’ heading out into the audience with her white Rickenbacker bass sparkling in the light as she posed for photographers without dropping a single note.

‘If’, Julia explained was “a little heavier”, and she wasn’t joking as it ended up being the heaviest of the set and for me, one of the most enjoyable. With those trademark harmonies there once again and pitch-perfect along with some furious drumming from Pablo and that punchy guitar riff from Jackie, really – what’s not to like?

‘Stupid Girl’ was Julia at her most animated while Jackie tried to get the crowd involved during the intro to ‘Revolution’ to a somewhat muted response but once the song got going, the audience was more inclined to sing along when it came to that catchy chorus.

‘When I Get Out Of High School’ is an old favourite that should never be dropped from the set while Julia strapped her red Telecaster on for ‘Complication’ giving the guitar sound an extra boost.

Another favourite of mine, it’s surely a Syteria classic in the making because it’s all here from the thundering drums to the razor-sharp guitar riff and the cherry on top is the top-notch vocal performance from Julia.

There was a belated bit of audience participation during ‘New World Order’ before the band disappeared off stage at the end of the main set before re-appearing for the inevitable encores. Syteria, like Till Death Do Us Part before them have no shortage of talent so it’s up to the rock and Metal community to get behind bands like this and support them. 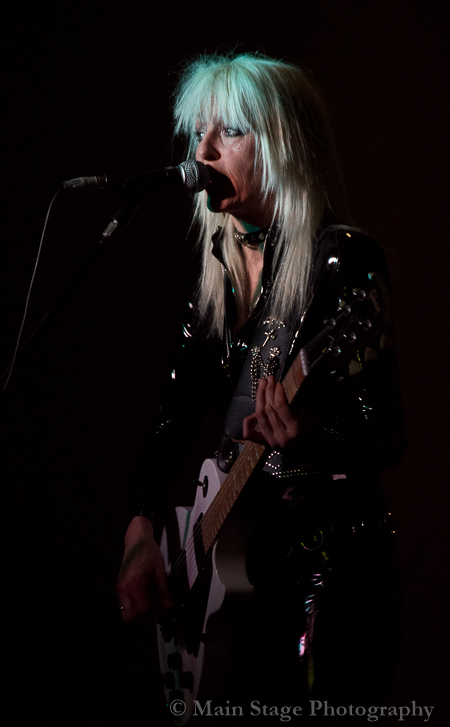 Syteria Set List:
I’m All Woman
As If
Reflection
Get A Life
Loner
If
Stupid Girl
Live, Fail And Learn
Revolution
Rockaway Beach
Hypocrite
When I Get Out Of High School
Complication
New World Order
Kamikaze
Sheeple (Model Citizen)