As the final day of the festival dawned, we once again managed to drag ourselves out of bed and headed down to the Mash and Barrel for another quick breakfast that would hopefully set us up for the day. 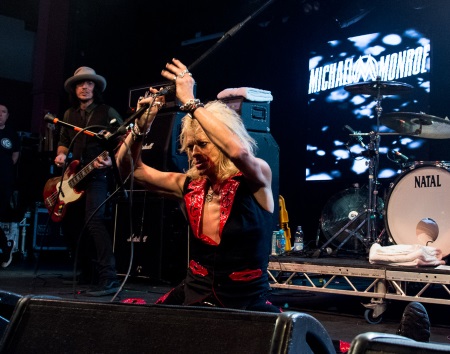 After the drunken shenanigans of the previous evening and the late night, we were all a bit tender once again – those people at Jagermeister have a lot to answer for, let me tell you!

As the previous day, there were two stages in action and we split ourselves between the two of then to bring you the lowdown on as many bands as possible. Unfortunately we missed Welsh wonders Haxan on the smaller stage two, but we did manage to catch the mighty melodic hard rockers Devilfire (who until recently could be found under the Devilstar moniker until the name was changed in haste late last year).

Another new band for me, their debut album, ‘Rhapsody In Motion’ is due for release later this month, and fronted by Alex Cooper, the band shone brightly in front of the sizeable crowd – not bad for their first UK show joked Cooper as it seems they’ve spent more time gigging in mainland Europe than in their home country. 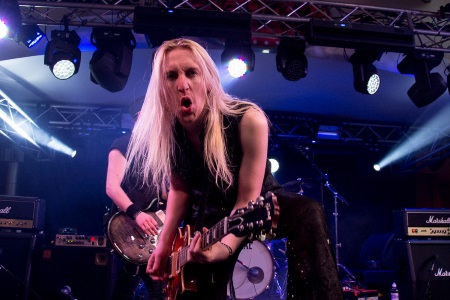 ‘Kill Your Love’ was among their best with guitarist Baz Blackett showing off his excellent guitar skills. Another new band for me and another like on the band’s Facebook page from me. 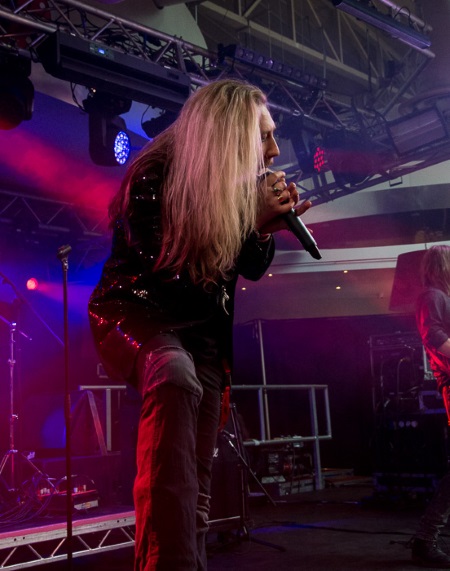 Trophies of Man are another new outfit for me so I wasn’t sure what to expect from them. Based in London, this guitar driven five piece features musicians from acts like King Lizard, Renegade Playboys, Maleficent, Drilling Spree and Blackstate Highway and they managed to pull a respectable audience.

Fast and solid drums, courtesy of Moyano El Buffalo, are the key to this band’s sound with the addition of the thundering bass from Alice Rain while guitarist Dave Winkler pumping out some great solos. Front man Flash Sawyer may not have been saying much in between songs, but he has a great singing voice and certainly kept the audience engaged.

Leicester based Hell’s Addiction were up next with their own brand of classic no-bullshit rock ‘n’ roll songs that take their influences from the likes of AC/DC, Guns N’ Roses and Motely Crue. Fronted by Ben Sargent the band drew a big audience who witnessed a high energy performance.

One of my most wanted “To See” bands of the weekend, I absolutely wasn’t disappointed as they ran through tracks including ‘Backs To The Wall’ from their second album, 2016’s ‘Broken’, which had the powerful guitar riffing of Liam Sargent and especially David Weir.

Another band that were everything I was expecting and they didn’t disappoint – with the band having announced a clutch of gigs in Central England, they’re another band that I highly recommend.

The last time I caught up with North of England based rockers Falling Red, it was at a small Scottish festival back in 2014 where they were billed as Special Guests to The Dirty Youth (who they proceeded to blow off stage!), so it was a long overdue catch up with the band here.

They were always an exuberant live act and they’ve lost none of their sparkle or passion in the intervening years with front man Andrew Roze having the audience in the palm of his hand throughout their set. Currently writing their third album, the band pulled a large audience with a solid set that reminded me (and a few others) what a great little band they are.

An old favourite, ‘Empire of The Damned’ went down a storm as did set closer ‘If You Ain’t Down with the Rock’, after which the band took their final bows but the audience were making so much noise it was disappointing that they weren’t able to return to the stage for a quick encore. Overall, a top set from a bunch of top blokes, so let’s hope they capitalise on their hard work here and pencil in a few more live dates.

Dublin hard rockers are another new name for me and with the promise of “hard rock sounds from the Eighties with a modern twist and blazing guitars”, it’d seem silly not to check them out. The fact that they’re also supporting LA Guns on their UK tour also shows that this band are worth a watch and although I didn’t see their whole set but I was impressed by what I did see.

Front man Tommy Rockit is a real gem and has the look and the skills to do his job while (hoodie-clad) guitarist Ronnie Velvet kept in the back ground while the other guitarist Andii Andrews interacted well with Rockit.

Even the short blast that I heard impressed me enough to keep an eye on them and I really hope that I can catch the band when LA Guns roll into Glasgow later this month.

Saints of Sin may have had a small audience but it was a dedicated one who didn’t need much persuasion to get involved. Throughout the band’s set they gave an energetic performance with the occasional bit of rehearsed stage-moves but there was some great twin guitar work from Marcus Jenkins and their other guitarist.

The band weren’t previously on my radar and are now, and apparently have a debut album, ‘Welcome To The Circus’, available and it’s something I’d like to get hold of, but unfortunately they don’t have a website and their Facebook page doesn’t have a link to get a copy – a shame, really, because after a great set like this, I’m sure that other people are looking for the album too. Get it sorted out, folks!

Over on the larger stage, we dipped in to see what was happening throughout the day. First to grace the stage were Summers, an easy-going band who pulled a good, if reserved, audience which was a nice change from the hairy horrible racket that was going on across the road!

The calm and occasionally acoustic driven tracks was certainly the best way to ease into a Saturday afternoon, and the voices of front man Crash Summers and bass player Ricky Summers blended together in pitch perfect harmony, especially during ‘Acceptable’.

There was a bit of full-on rock with ‘Judgement’ though Crash Summers missed his chance to get the audience involved with the “nananana” part – such a small complaint on an otherwise faultless and entertaining set.
Vega 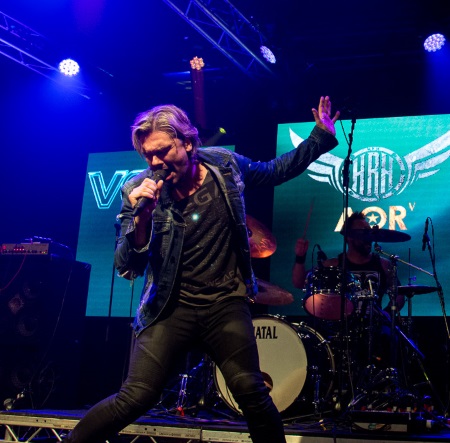 It’s been a few years since I last saw Vega live when they supported Joe Elliott’s Down ‘N’ Outz in Glasgow (It was January 2015 – Ed) and I was long overdue another look at them.

It seems I wasn’t the only one either as a large and expectant audience turned up to see them too, and no-one went away disappointed after the band’s energetic performance. Front man Nick Workman seemed impressed by the reaction from the get-go and he made the most of things as he gave his performance everything.

‘Gonna Need Some Love Tonight’ and ‘Every Little Monster’, the first track from their most recent album, ‘Who We Are’, also received a solid reaction from the crowd. I just hope it’s not another two years till I see them live again – they’re too good to miss.

Former White Lion singer Mike Tramp seems to tour constantly and this is the first chance I’ve had to see him since White Lion imploded some twenty five years ago. There was a huge crowd to witness his performance which proves his pulling power hasn’t diminished and his laid back approached certainly went down a storm.

His set consisted of White Lion numbers ‘Little Fighter’ and ‘When the Children Cry’ as well as solo numbers and a sole track from Freak Of Nature (the band he formed after White Lion), ‘What I Am’. 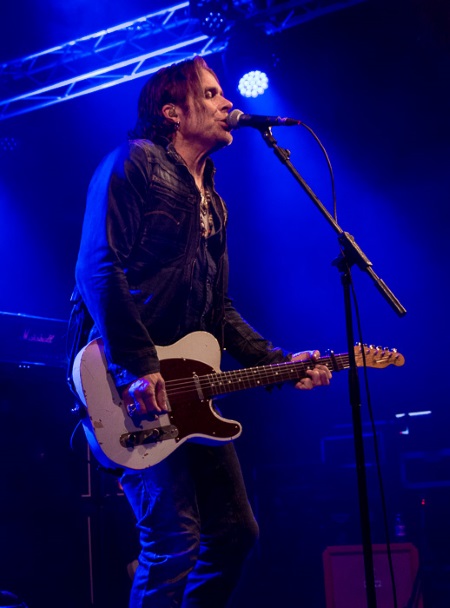 Of his solo material, ‘Trust In Yourself’ seemed to hit the sweet spot with the audience. Tramp’s band were a top collection of musicians with the guitarist proving to be a prodigious talent.

The last time I saw LA Guns was about six years ago in a small dingy club in Glasgow. Since then the band have changed personal with Tracii Guns rejoining (filthy) Phil Lewis and the world tour and this is a huge draw it seems as the hall was absolutely packed as people tried to secure any vantage point they could.

The atmosphere was tangible as the lights went down and the band finally made their way on stage to a huge ovation. The audience were ready and the band were ready and what followed was a masterclass performance. Lewis was on top form throughout the set and singing better than I’ve ever heard him, and he seemed to be having the time of his life, interacting with the audience throughout and hugging Tracii Guns occasionally in a great show of unity.

Guns was on fire too – his guitar solos were played well and got a huge response every time he stepped up to centre stage. The band’s set list was mostly centred around the band’s 1988 self-titled debut release and including rousing versions of ‘Bitch Is Back’, ‘One More Reason’ and ‘No Mercy’. The rest of the set was made up of fan favourites like ‘Kiss My Love Goodbye’ and, as you’d expect, ‘The Ballad of Jayne’.

All in all it was a great set from a band on fire – and as they undertake their UK tour, if you see them playing near you, don’t hesitate – go and see them, otherwise you’ll regret it – a lot! 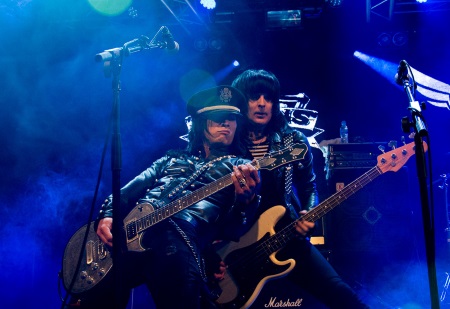 What can you say about Michael Monroe that hasn’t already been said? I mean really? That’s an actual question… He’s been entertaining the masses for nearly forty years and shows no signs of slowing down either. 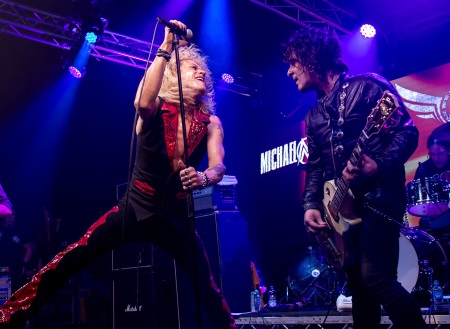 His fire for performance remains undiminished as he stalked the stage before an enthusiastic audience. The arena wasn’t as full as it was for LA Guns but Monroe and his band pushed full throttle. Performing classic solo tracks like ”78′, ‘Trick of the Wrist’ and, as you’d expect, ‘Dead, Jail or Rock ‘n’ Roll’ alongside ‘This Ain’t No Love Song’ from latest album ‘Blackout States’ and with a handful of Demolition 23 and Hanoi Rocks tracks to keep the party going.

Throughout the set, he chatted freely to the audience and several times stood atop the crowd barrier (often precariously) trying to get everyone involved. Another fantastic performance from someone who, often, doesn’t get the credit he so richly deserves.

With Michael Monroe’s set done, so were the MetalTalk team who ended up throwing the towel in early, missing the performance from Slaughter but after a monumental weekend as covering live sets from over twenty five bands, it was the end of another incredible Hard Rock Hell festival for us.

Huge thanks to the Hard Rock Hell Organisers, the elusive Dark Circle, Chic Festivals, Central Press, all the bands and, of course, all the people we’d partied with over the weekend. Hard Rock Hell gets bigger and better every year and I’m looking forward to the next one already!