Iron Maiden and Brazil have had a love story since the legendary Rock in Rio gig back in 1985. Since then many magnificent gigs have happened in the country, including two more Rock in Rio appearances as headliners and recording a live album and DVD. 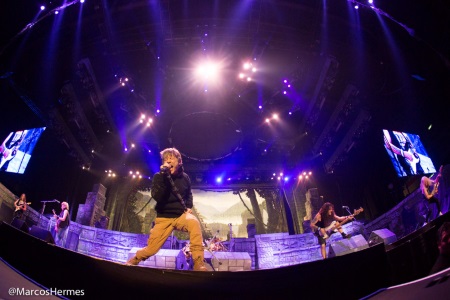 They have brought Metal gigs to cities that had never seen a Metal gig before, an accident happened during a gig which you can read about here, and so on…

This time things weren’t different. Before the first show of the Brazilian leg of the tour in Rio, Maiden received a platinum album from Warner Music, which represents sales of over 80,000 copies of ‘The Book Of Souls’ in Brazil.

The 16th studio album of the band, released worldwide on September 4, 2015, reached number 1 in the Brazilian charts and in over 23 countries. 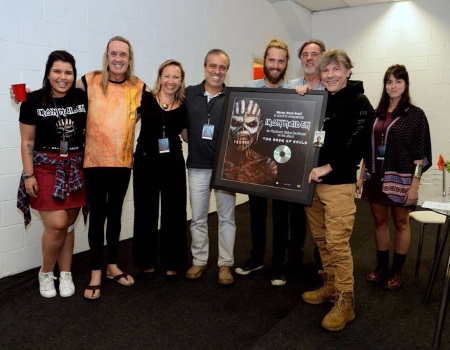 Also, Maiden received a commemorative plaque and shirts from Vasco da Gama, one of the most popular football teams in Brazil, which uses Eddie as their mascot. The relationship between Vasco and Maiden dates back from the beginning of this decade when in 2001 the band attended the final game of the Brazil Cup in the legendary Maracana stadium, in which Vasco was the champion. On that day Steve was wearing a Vasco t-shirt and it is said that he also has a Vasco flag on the wall of his house.

“Steve Harris met us backstage. The rest of the band had not arrived yet. He loved it and thanked us. The amazing thing is that all of Maiden’s staff knew Vasco and liked this relationship. We were very well treated by them” said Rodrigo Melo, one of Vasco’s representatives for this tribute. 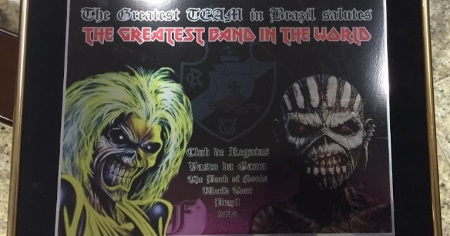 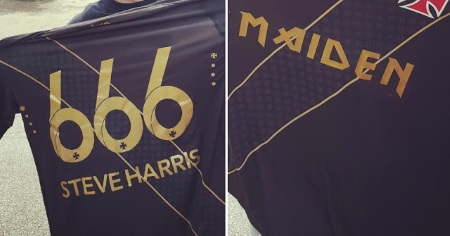 Earlier that day, Maiden did what they always do when in Brazil. They played football! The match happened at CFZ’s facilities, a club owned by Zico, one of the biggest Brazilian football players in history. Strangely, Zico is the biggest idol in the history of Flamengo (the biggest team in Brazil), Vasco’s fiercest rival. For you British to understand, it is like if Steve went to play a match at Millwall. The band even posted this on the official instagram page:

Anyway, the show in Rio began with a fun animation starring the Mayan version of Eddie and Ed Force One taking the band around the world. Then the band hit the stage with two songs from the new album. ‘If Eternity Should Fail’ (originally written by Roy Z for a Bruce solo album) and the album’s first single, the thought-provoking ‘Speed Of Light’.

With respectable breath, especially considering his recent victory against tongue cancer, Dickinson ran from side to side on the side platforms of the stage adorned by simulations of pre-Columbian architecture, while Harris led the small string orchestra on the ground floor of stage alongside guitarists Dave Murray, Adrian Smith and Janick Gers. 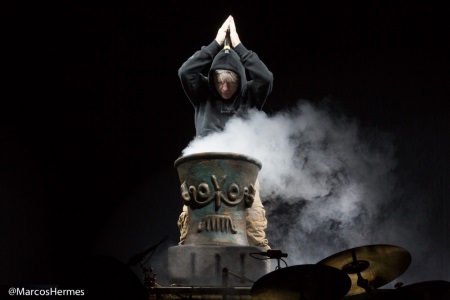 All, of course, in front of the charismatic Nicko McBrain, as usual hidden behind a giant golden drum kit, probably the most beautiful kit he has ever used.

A walking Eddie appears during the ceremonious ‘The Book of Souls’, which goes from the usual crazy antics by Janick Gers to a dramatic conclusion in which Dickinson throws Eddie’s bloody heart to the crowd.

An inspired version of ‘Children of the Damned’ is the first of a bunch of old classics to be played. Before the song, Dickinson looked at the audience and said. “After visiting South America, we finally got to the main event: Brazil.”

Bruce Dickinson even ruled on the political situation in Brazil. According to BruceFans.net, the singer raised a Brazilian flag, which was thrown onto the stage just before ‘Tears of a Clown’, and with the diplomacy of an experienced frontman, he took the opportunity to address the chaotic political crisis that deepened the country into an economic recession, in a discreet and non-partisan way:

“I have been looking at CNN and there is an awful lot of this flag on CNN. I’m gonna say something, I hope it works out the right way. Whoever are the bad guys I hope they get fucked, all right?”

Before the gig gained any political overtones, the band followed with a sequence of classic songs such as ‘The Trooper’, ‘Powerslave’, ‘Hallowed Be Thy Name’ and, of course, ‘Fear Of The Dark’, with the guitars lines sung by pulsating throats in every sector of the venue. 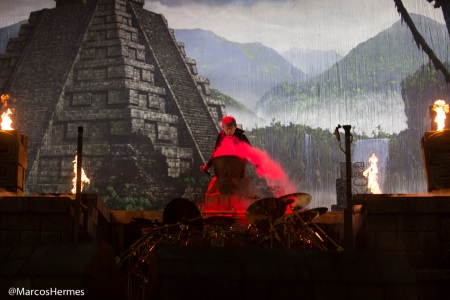 After a brief interval, the audience returned to steal the show by following the national tradition of reciting the introduction of ‘The Number Of The Beast’, the first song of the encore. Before ‘Blood Brothers’, Dickinson made one last speech: “The world can be a terrible place, but you know what? We’re in a Maiden show. There are people of different nationalities, races and sexual orientations here, and we’re not killing each other. And that’s what matters, for we are all blood brothers.” 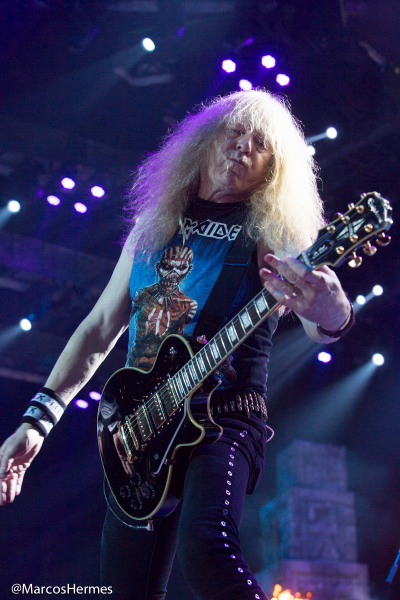 Experienced veterans with the enviable energy of novices, Maiden closed the show with ‘Wasted Years’. With its remarkable chorus that despises nostalgia (“Don’t waste your time always searching for those wasted years…Realize you’re living in the golden years.”), the band confirmed their good shape and the desire to move forward, respecting their own past, but without relying on it to return to Brazil in a near future.

And they will certainly return. 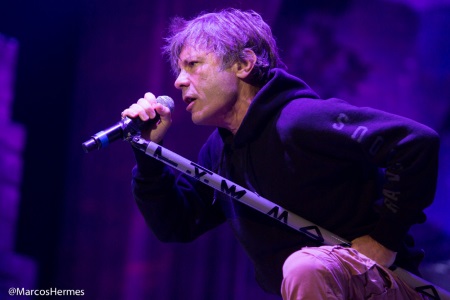 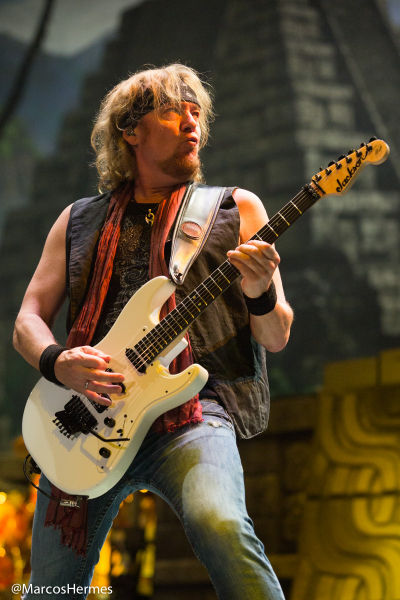