Temple Of Lies are a quartet who hail from Leicester and first came to light back in 2010. Since then, the band have been honing their skills on the road as they blitzed venues up and down the country with their brutal sound showcased through their debut album ‘Monumental’. 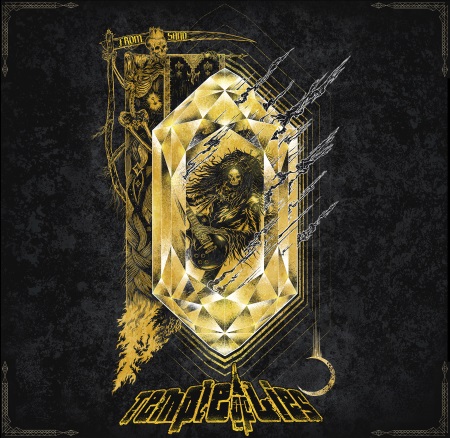 The band produce an energetic live show which delivers both musically and visually, and they have shared stages with the likes of Kyrbgrinder, Stormbringer and One Machine.

Overcoming a number of personnel changes early on, the band have now consolidated their line up and with their second album, ‘From Sand’, the band have taken the decision to re-work a few of the tracks from their debut album for the new record, which reflects the heavier, more mature sound they now have.

Produced & mixed at The Paddocks studio in the Leicestershire town of Melton Mowbray by Ross Hillard, ‘From Sand’ is eleven tracks long and has a running time of around forty five minutes, and is on the whole is a solid collection of tracks.

Things start off well with ‘Rope’ with its short intro before the song leaps into life. Front man Si Shaw puts in a good performance here, sounding not unlike Metallica front man James Hetfield at times, but that’s not being disingenuous as Shaw’s overall singing style works really well and suits the song.

Shaw gives a more subtle vocal during ‘Pure Alcohol’, which becomes one of his least aggressive performances of the record. The chorus is onto you before you know it, and it’s a good catchy one too before guitarist Jon Scranney keeps the song moving forwards with the great guitar riff. In fact Scranney puts in a great performance overall here which includes one of his longest and most entertaining solos of the album.

Title track ‘From Sand’ has the vocals pushed to the back of the mix more than some of the tracks, allowing the drums from Alex Gamble and Scranney’s guitar take centre stage. Shaw does prove his worth, however, in a great vocal performance as he holds onto some of the longer notes well while some whispered vocals add an extra intensity to the whole song.

‘Riff Machine’ is a more spirited sounding number while still retaining a heavy edge to it thanks to the guitar riff which drives the song onwards. There’s a distinct lack of vocals which gives the song a different feel from the others and allows the band to show what a solid unit they are during the instrumental section. 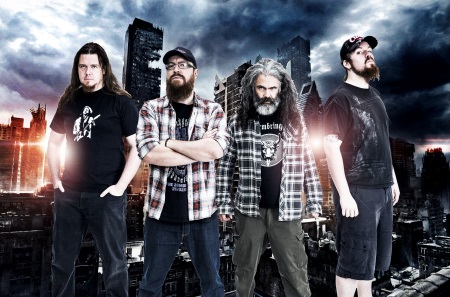 ‘Crystal’ may be one of the more mid-paced numbers (written about Crystal Meth, I assume) in what is an interesting side of the band but tracks like ‘Feed The Greed’ soon pick the pace back up. The latter certainly has the ability to be a fun number live as it’s pretty much guaranteed to get the fists punching the air and the audience shouting of “666” at the appropriate moment in what is ultimately a good track overall.

In fact, there are a good selection of faster paced track like ‘Bats’ which has Shaw’s vocals tinged with menace while bass player Simon Mitchell gets to shine with a short solo…well, almost! Gamble too shows his skill as he plays the fills right around the drum kit as opposed to just using the tom toms and it’s a very solid effort overall.

For me though, ‘Fire In The Hole’ is probably the fastest song here with Gamble setting the tempo during the intro. Shaw also gives his most aggressive performance here and the ghostly voices in the background add extra texture to one of the best songs here. Sure the chorus “there’s a bomb, there’s a bomb, there’s a fire in the hole” is repeated a bit too often for my liking, but it certainly doesn’t detract from the song overall.

It’s a solid effort from the band who certainly seem to be going in the right direction. The ‘From Sand’ album may be varied in terms of tempo and performance but it shows ambition from a band who want to stand out from the rest of the up and coming UK bands. Job done, I say, and I’m hoping to catch the band live to see how these songs translate onto the stage.