Joanna Connor has released her album ‘4801 South Indiana Avenue’ today and to celebrate, she has shared the video for the track ‘Destination’. You can watch the track below, or catch it on the MetalTalk SoundCloud Tracks Of The Week playlist.

The unstoppable locomotive that is ‘Destination’ opens ‘4801 South Indiana Avenue’ with some ferocious slide work and you can sense that this has captured the very soul of what makes Joanna Connor such a force of nature, her raw passion and finely honed skills are blazing bright.

Of the track, Joanna told MetalTalk: “‘Destination’ is a real house rocking tune written by a somewhat overlooked band called The Assassins, led by Jimmy Thackeray. It was made sweeter by the soulful background vocals of Jimmy Hall. Joe [Bonamassa] and Josh [Smith] joined in as well.

“It is a great showcase for my frantic and frenetic guitar work.”

‘4801 South Indiana Avenue’ taps into the deep well of experience that the guitarist and singer has gained over the decades since she first picked up her first guitar at aged seven. Joe Bonamassa and Josh Smith have sympathetically brought out all that makes Connor so special and distilled this into the ten incendiary tracks that make up this release.

You can read our review of the excellent album here.

Fan of Connor and modern King of the Blues, Joe Bonamassa decided things had to change and, along with fellow producer Josh Smith, took her into the studio and the result is this absolute masterclass.

Recently, Joanna Connor told MetalTalk TV that: “Joe said ‘I’d really like to produce a record for you. I have an idea and a vision of what I would like to do with you in the studio. I’m really going to push you hard’

“He planned everything. He was really hands-on and I was not sure how it would turn out, but there really was chemistry there and it was just a beautiful, beautiful experience. There is a lot of fantastic playing on the record from everyone.” 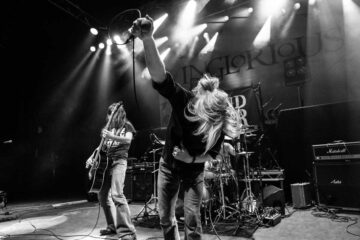