He is back again. That unstoppable Swedish Death Metal Juggernaut Rogga Johansson returns, and this time it’s his Grisly project and their second full length, Salting The Earth.

Grisly was initially formed in 2014 after Dennis Blomberg left Paganizer but wanted to still collaborate with Rogga. They teamed up with local drummer Henke Lundgren and formed Grisly, releasing their debut, The Spectral Wars.

Fast forward to the present, and for this follow-up release, Rogga covers guitars, bass and vocals, and is joined by Håkan Stuvemark of Wombbath on lead guitars and Nicke Olsson of Leprosy, One day in Pain, Putrid Vision on drums. 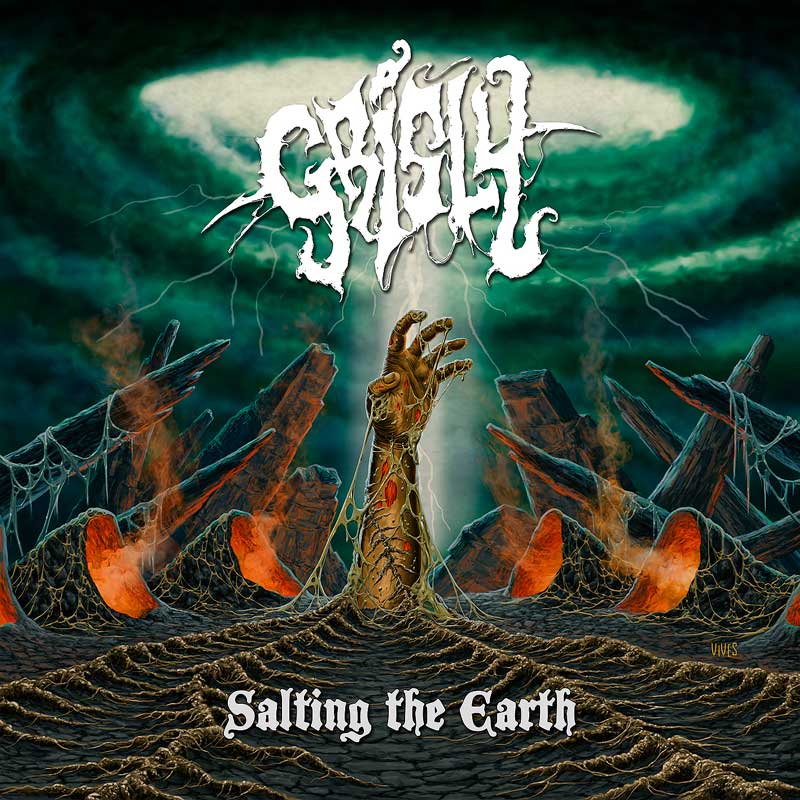 So, with the complicated bit over with, how does it sound? As you would expect, with Rogga in the driving seat, it has that certain trademark of his, something that, including myself, will make his army of fans happy.

As with the predecessor, this leans the sound slightly away from Swedeath, taking on board some of the filthier elements found in bands like Autopsy and Asphyx, with a touch of Benediction at times. The result is both addictively catchy and decidedly filthy.

The ten-track offering is a compact twenty-nine minutes, but there’s a lot jammed into this timeframe. Opening on By Inferno’s Light, a snarling, unrelenting beast of a track, where, like most of this album, the melody is there but restrained just enough to grab your ear but not so much as to dilute the filth and brutality, which is bolstered by Rogga’s snarling growl. This is elevated midway by a swathe of lead work which rises, albeit briefly, out of the melody.

Dying Like Dogs In Winter continues in the manner of its predecessor again with a welcome midway burst of leadwork but with even more filthy and brutal intent. Mutilator delivers more of a punchy crunchy filth with an addictive repeat and a surprising repeated direction switching, again with midpoint leadwork, which seems to become more ambitious with each subsequent track.

Wickedness That Lurks Within charges forth at a galloping pace. At this point, the whole album is like a runaway truck. The brakes have failed on a steep hill, and all you can do is hold on and enjoy the excitement.

As a result, Skymningssonaten comes as a complete surprise. A bleak piano instrumental interlude, a stark but beautiful piece, it is the calm before the storm that is Mexico (Reign of Bullets). Mexico picks up where Wickedness left off, with crunchy punchy riffs, squealing leads, a galloping D-beat and Rogga snarls.

Last Days In Fear picks the pace up a little faster, the haunting melody weaving its way through and the shreddy leads slicing through like a razor. The album title track Salting the Earth doesn’t take any prisoners either.

Things get a little different with Driver, particularly in the vocal department, which I love. They have a harder, clearer, cleaner, but still brutal slant to their delivery. The track also has a bit of a Benediction feel, and the leadwork is both bonkers and extensive. I love this track!

The final track, Souls Last Caress, is the album monster at almost five minutes and also brings surprises, an acoustic opener that expands into a beautifully haunting and mournful melody, dropping back to become reflective. It is a surprisingly meandering piece, and you really don’t know where it will go, but every turn of the corner brings another surprise. This is especially true with the rugged semi-clean vocals.

The last two tracks prove that if you thought Rogga couldn’t surprise you after over one hundred albums, you would be wrong.