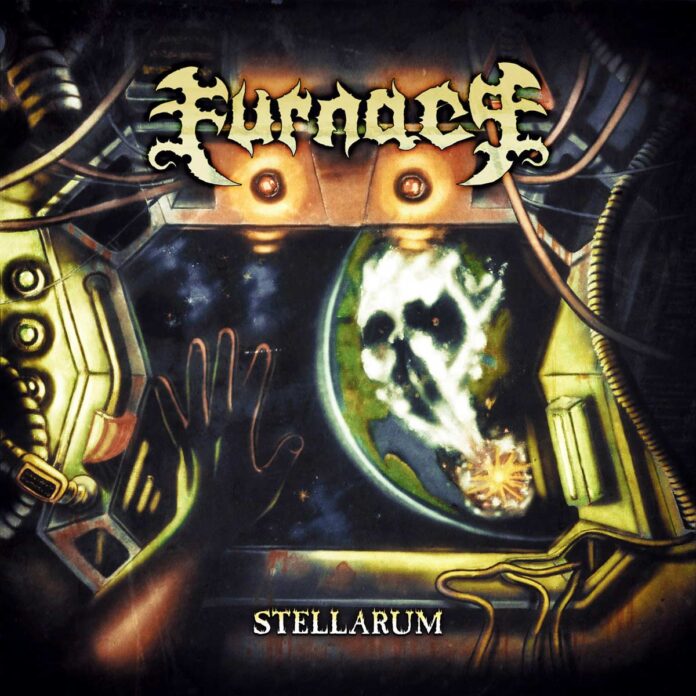 The band, for anyone not yet up to speed on Furnace, is masterminded by Rogga Johansson (Paganizer, Massacre) and Peter Svensson (Assassin’s Blade, Void Moon). Created out of their shared love of horror-fantasy concept albums, Furnace are completed by drummer Lars Demoké (Gauntlet Rule, Catacomb).

As an album, Stellarum delivers, musically, ten songs that are, in a nutshell, a combination of the two previous albums, the more straightforward melodic death songs of debut release Black Stone Church melded with the slightly progressive/gothic elements of Dark Vistas.

Lyrically the concept also continues the stories of these two albums, pulling them together into a trilogy. This draws on concepts from those previous albums and combines the more Lovecraftian themes of Dark Vistas with the dystopian elements of Black Stone Church, as well as elements from the old Soviet film Polaris and a few other sci-fi themes.

Firstly, I’ll say I really like this album. In fact, I like all three albums immensely, and Furnace is quite possibly my current favourite “Rogga project”. Black Stone Church was a real head-turner for me. Dark Vistas blew me away completely, it still gets bi-weekly to monthly plays by me eighteen months after its release, and it’s often playing in my head when I’m not physically listening to it.

So Stellarum had an awfully big act to follow, but thankfully, it has inherited some of the addictively catchy, slightly gothic riffing of Dark Vistas whilst still maintaining its own individuality.

With this ten-track offering, the trio are space-bound with a stowaway aboard, on a journey to Mars and beyond, one that, it seems, doesn’t go quite to plan. Opening with Brother J, immediately, there is a welcoming and comfortable familiarity that echoes through the riffs, glancing back to the previous album.

Continuing with Watching Your Dreams Go By, a galloping driver that skilfully melds into its construct a haunting but addictive melody and well-defined drum work that adds an additional texture. I love the unnerving midway drop in pace. It adds an ominous air, which is followed by more militaristic style drum rhythms to open on the hugely addictive Starbound Stowaway.

Then it’s count down, blast off, and we ascend to space, on the journey to Mars, Under The Command Of Captain Shaw, where haunting riffs course through the length of this catchy number which complements Rogga’s growling delivery perfectly. The stowaway is found, but they can’t go back, so he has to go on with the crew. Could this be the downfall of the ship/crew/mission? 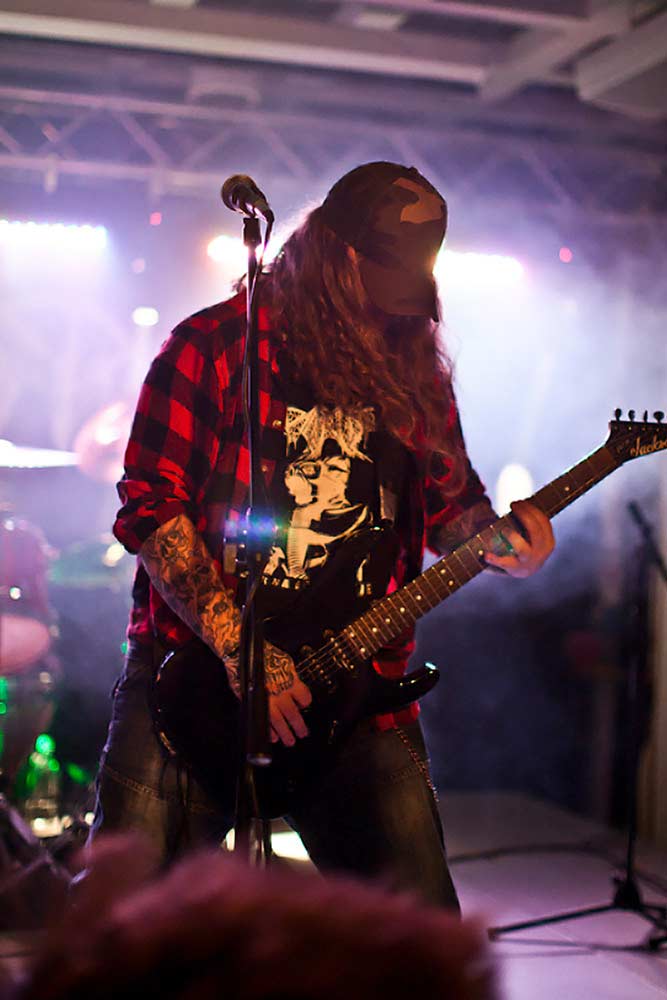 Next, New Eden boasts another haunting repeat riff to open and hints that it may not be quite the place they think it is.

The mood turns more sinister at this point with Merging With The Dark, which delivers a faster, more urgent pace but still remains haunting. Manifestations is superbly haunting and catchy again, with spoken elements alongside the growls and featuring guest female vocalist Indii Hofvander which adds another dimension.

Man Reborn is very up-tempo but still maintains that haunting melodic quality. Dropping back for A World Beyond The Void, which takes on a slower, groovy chug alongside the haunting melody giving a very “otherworldly” feel. The final piece, Mission Report 80-096-02, has excellent, gritty rocking groove.

When I first started listening to Stellarum, I thought two things: I knew which were my favourite tracks, wrong! It’s an end-to-end epic listen, each track a vital part in the story and each with its own individual merit, but needing the others to paint the full picture.

Secondly that I couldn’t possibly love it as much as I love Dark Vistas. Wrong again!

Stellarum really is yet another brilliant chapter of a superb trilogy of albums.