Grammy-nominated Lamb Of God will release their latest album, Omens, on 7 October 2022, with the first single, Nevermore, due this Friday. As well as an appearance at this year’s Bloodstock Festival, the band will hit the UK in December for five dates with special guests Kreator.

“Two decades ago, Lamb of God, along with Killswitch Engage, were a part of a new wave of American Heavy Metal music,” Mark Morton said. “Our scene grew from a small, loosely connected network of underground shows in basements and warehouses into a global phenomenon that helped define an entire generation of modern Heavy Metal.

“We are thrilled to announce The Omens Tour, which celebrates not only the perseverance and impact of that original movement but also the creativity and originality of the bands that it influenced.

“Heavy Metal is alive and well. The Omens Tour proudly showcases the depth and diversity of our scene. This is not a tour to miss.”

Omens has been described as Lamb Of God’s most furious set of music to date. “The world is crazy and keeps changing,” vocalist D. Randall Blythe said. “Omens is a reaction to the state of the world. It’s a very pissed-off record…It is extremely pissed-off.”

Lamb Of God tracked Omens live in the room together at Henson Recording Studios (formerly A&M Studios) in Los Angeles, California, a location that birthed classics from The Doors, Pink Floyd, The Ramones, and Soundgarden, among others. “The inner workings of the band have never been better,” Morton says. “You can hear it in Omens. You can see it in our performances, and if you’re around us for five minutes, you can feel it.”

Omens can be pre-ordered from lamb-of-god.com 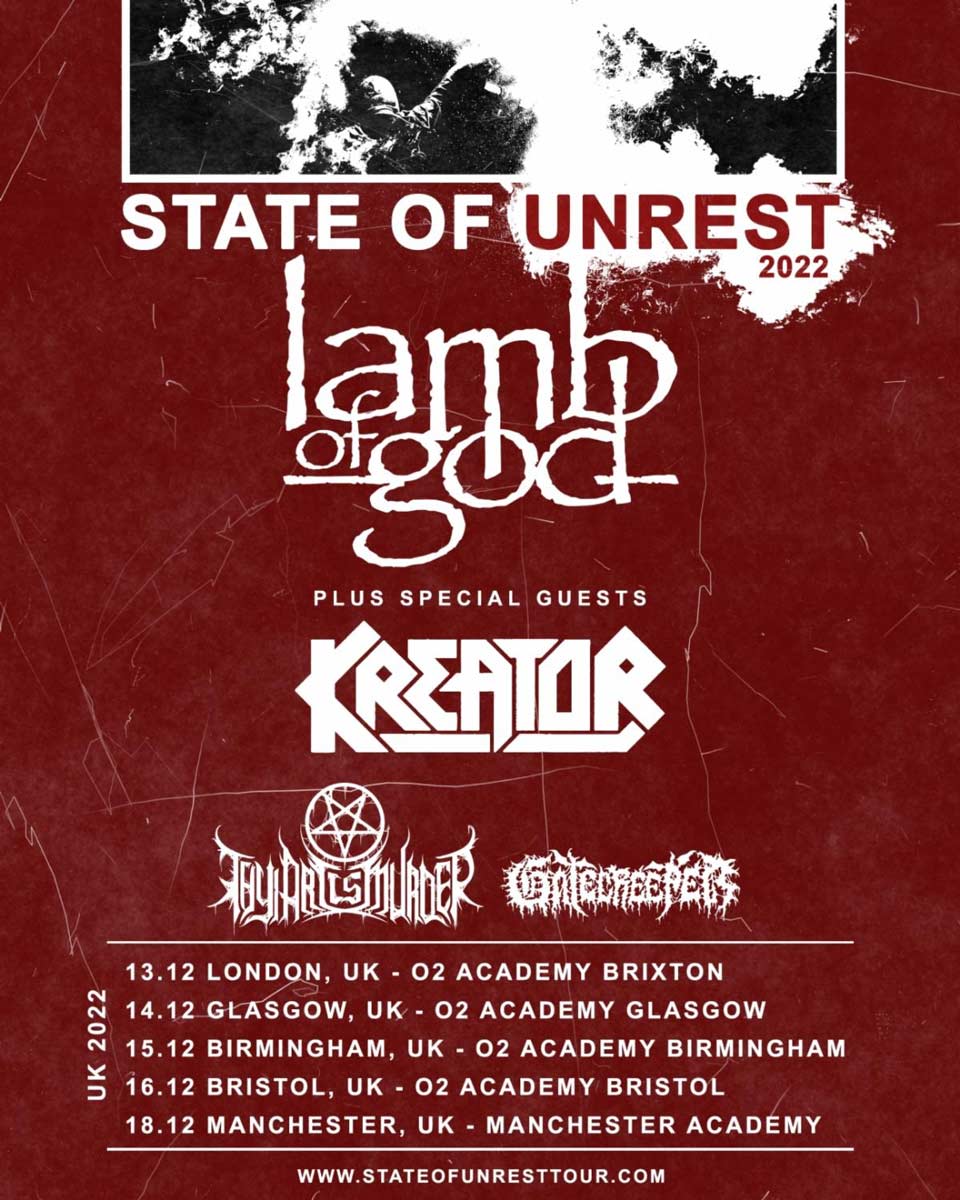 Lamb Of God will be joined by social guests Thrash Metal legends Kreator, for the European leg of the State Of Unrest tour, supporting their new album Omens, due on

Lamb Of God will be joined by social guests Thrash Metal legends Kreator, for the European leg of the State Of Unrest tour, supporting their new album Omens, due on 7 October 2022.

Thy Art Is Murder and Gatecreeper provide support.

Lamb of God w/ Killswitch Engage, Motionless In White, Fit For An Autopsy

Oct 07 – Sacramento, CA – Aftershock Festival *No Fit For An Autopsy

Lamb of God w/ Killswitch Engage, Animals As Leaders, Fit For An Autopsy