‘The Grotesque Arena’, is the debut offering from Australian Metal extremists Feculent, who feature current members of Shackles, Snorlax, Resin Tomb, Descent, Siberian Hell Sounds and Idle Ruin. It is not a listen for the faint of heart or the frail of stomach…..I am delighted to say.

What it is, is a filthy and brutal meld of Death/Doom that delivers a good dose of ugly, messy, jarring and dissonant riffs with a “black as the hobs of hell” undercurrent that is heavily steeped in the stench of rotting corpses. Six tracks span a mere nineteen minutes, but you do not need any more than that to satiate your fetid desires. 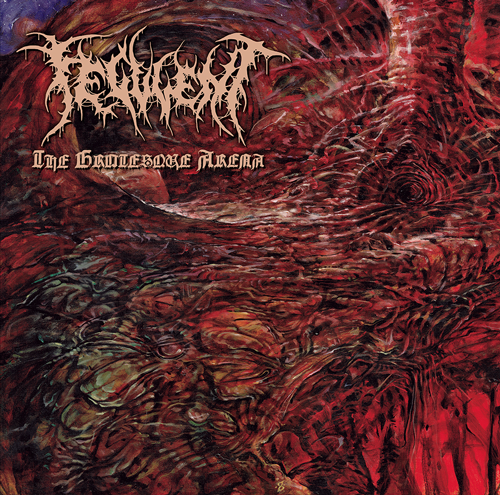 ‘The Grotesque Arena’ has a split title track, opening on the first instalment, the dark driver ‘The Grotesque Arena: Upon Splintered Bone’, a track punctuated with gut churning gutturals, nerve splitting screams and riffs that twist and turn in a tortuously fascinating manner.

It is followed by ‘Host Consumed’, which is an unstoppable, ground shaking beast that pounds its way through your senses.

Continuing further with the unstoppable drive that fuels this album is ‘Weaponization Of The Amygdala’ which has a stunning blackened undercurrent that oozes between the spewing vocals, and riffs which jar your senses and set your teeth on edge. A great track that I kept going back to, just to check it really was as delightfully brutal as I thought.

Next, ‘A Pit Of Unscalable Depths’, an ugly, brutal, discordant and pounding beast with an engaging meld of tormenting squealing and deranged riffs, and a sinister undertone.

Then we arrive at the sinister and suspenseful ‘Beneath Bedlam’, an unnerving listen. Slow and tortuous, the vocals arrive with a rancid scream midway through. Definitely the best track of the release, purely because you just do not know what to expect, it takes several listens to fully comprehend.

The album closes with the second half of the title track split, ‘The Grotesque Arena: A Perverse Spectacle’, which keeps the brutality dialled up to the max right to the end. It starts as a gut churning assault on the senses and slows gradually as it progresses, to make sure you are fully ground to a pulp by its grizzly mass. It then reverses over you with acerbic indecipherable gutturals and squealing guitars to make sure you are well and truly finished off.

‘The Grotesque Arena’ is a filthy Death Metal delight and the cover artwork is a warning as to what you might look like after you have listened to this beauty.

MTTV: Jeff Plate / "It was such a thrill to join Savatage"