In these uncertain times, there is always one thing you can be both certain of and look forward to. That you are never far from another Rogga Johansson album, and I’ll raise a glass to that!

This time it’s the second album from Eye Of Purgatory, namely The Lighthouse. This is the follow up to 2018s The Rotting Enigma, which I believe was a solo endeavour. This time he is assisted by guest musicians; Ribspreader’s Taylor Nordberg on drums, lead guitars and keyboards and Jeramie Kling of Ribspreader and Venom Inc. on bass, both of whom have worked together on many other different projects including Goregäng , Infernaeon and Inhuman Condition as well as with Rogga, who here is covering guitars and vocals. 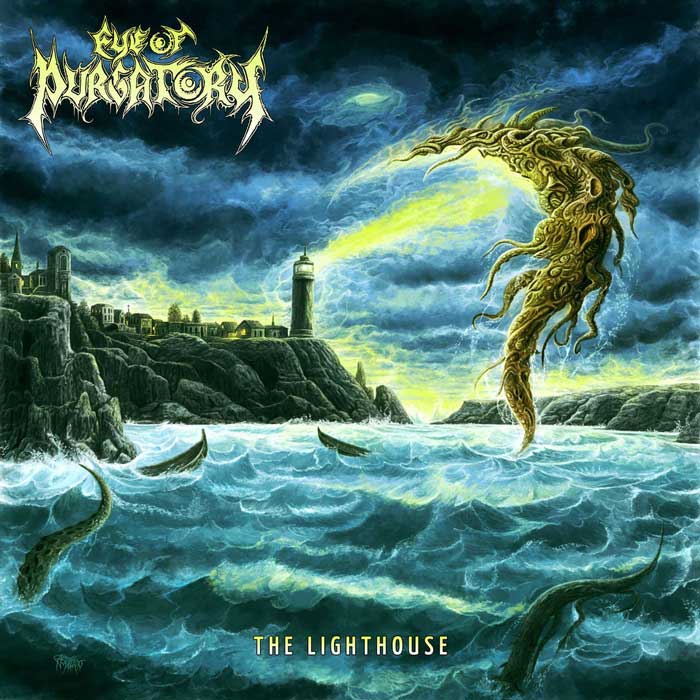 Because they are all very familiar with each other’s style and capabilities, it makes for a winning combination once again.

The Lighthouse is a nine-track thirty-five-minute slab of Rogga style Swedish Death Metal that is as melodically addictive as it is dark and eerie. With crunchy riffs and a heavy groove alongside haunting keyboards, Rogga’s snarling growl of vocal delivery is brutally engaging, and this makes The Lighthouse a powerfully emotive listen end to end.

It is hard to put into words exactly what it is that I like about this album. Part of it is that it has enough of a degree of familiarity that I know I’m going to like it within a minute or two, but it’s sufficiently different that I’ll still remain engaged. It also has a subtle element woven into each track that links them. A key riff that is manipulated and varied keeps continuity across the release and gives a journey-like feel to the album, like a trademark stamp.

Then there are the haunting keyboards which add an all-important eerie touch to this very Lovecraftian feel album. The equally haunting, sometimes mournful melody that courses beneath everything, the punchy crunchy riffing which marches over the top, and the clarity of delivery to the growling vocals, gives so much to like and nothing to dislike.

Obviously, from what I have already said, there are no strong favourite tracks either, but a lot of standout moments that make you go “Oh!!” and pull you out of the fantastical reverie this album sends you into.

Particularly the bursts of leadwork that pop up in the second half of Fornever To Awaken and Pieces Of A Fading World, the clean reflective guitar drop away on Carved In A Stone Bleeding which is just sublime and the chunk of surprising blackened riffs that pop up briefly on They Silently Await.

All that remains to say is Rogga and Co have nailed it again.

Another winning beast of a release, The Lighthouse will appeal to Rogga fans and fans of Swedish Death Metal.

Available from: eyeofpurgatory.bandcamp.com in CD, various vinyl and digital formats.