Esprit D’Air / Oceans is something to celebrate and admire

Not many modern rock bands have managed to gather a fanbase while fearlessly blending genres and even languages as Esprit D’Air have. Vocalist, guitarist and songwriter Kai has been crafting a follow-up to their stellar Constellations album from 2017.

The full album is finally here after a long wait and a steady stream of singles and lyric videos. The album begins with the sweeping electronic intro track Into The Oceans, which leads into powerful, anthemic J-Rock of 津波 (Tsunami).

Leviathan is a fantastic blend of J-Rock combined with a heavier, far more modern sound. Think Luna Sea meets Motionless In White, and you’ll get an idea. Inspired partly by the legendary Final Fantasy VII video game, the ebb and flow between the heavy guitars and the mellow piano sections are characteristic of the entire Oceans album and one of its most engaging features.

Oceans Call is a brilliant, frantic blend of the dance floor and mosh pit with its shimmering synths and down-tuned riffs. Think Skrillex meets Power Metal, and you’re halfway there. It’s followed by probably the heaviest track on the album. The Abyss features Crystal Lake’s Ryo Kinoshita growling through his most ferocious vocals as the riffs veer towards metalcore levels of heavy before Kai comes back to provide the light and the melodic in the chorus. It’s a powerful punch to the gut track that demands your attention.

Featuring a guest appearance from The Sisters Of Mercy’s Ben Christo, Dead Zone begins with the haunting piano and percussion that transform it into film score territory before the chorus kicks in. Complete with a brief but blazing guitar solo, it’s one of many highlights on this album.

Esprit D’Air leader Kai told MetalTalk what it felt like working with some of his favourite players as well as finally having the album ready for the fans to experience.

“I am proud to finally release this album that I have been working on for over three years,” Kai says. “To collaborate with musicians I admire very much is also an honour. I hope that there are songs on there that are meaningful to fans, for them to enjoy, and to get them through these tough times.”

Nebulae is an altogether more upbeat track. With rolling drums, Kai’s soaring vocals and an electrifying blend of electro-rock, it’s another killer song on a record that doesn’t have any filler tracks. Amethyst sounds like it could have sprung from the soundtrack of a Final Fantasy boss fight, with a beautiful piano tinkling away plaintively behind a wall of rolling drumming and smouldering guitar. Guiding Light is another track that features a piano melody blending seamlessly between far heavier sounds. The beautifully exposed vocals, a blend of English and Japanese, makes it one of the most memorable songs on Oceans.

Glaciers is a gorgeous, symphonic soundscape of a song with soft falling piano notes and whispering vocals before the guitars kick in to bring the full Esprit D’Air sound back into focus. Moonlight Tides into 出逢い(Encounter) is the perfect, peaceful and dreamlike way to end a superb album that has its fair mix of light and shade.

Ultimately, Oceans is a painstakingly crafted album that demands attention and involvement from the listener. It calls on your emotions and asks for your response to dive in.

In a time when too many bands are content producing background music, this is something to celebrate and admire. A deep, thoroughly fresh and modern album, as enchanting as can be. 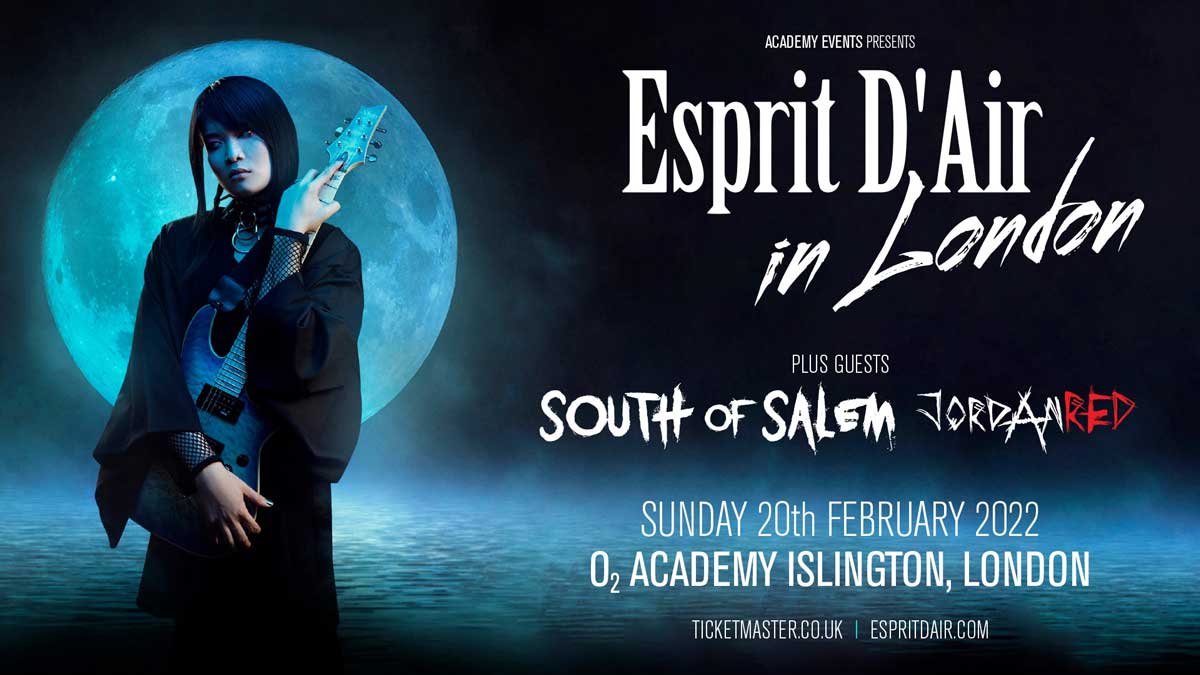 Esprit D’Air will return to London for a live show at O2 Academy Islington on 20th February 2022. They will be performing brand new songs from their upcoming album, Oceans.

Esprit D’Air will return to London for a live show at O2 Academy Islington on 20th February 2022.

They will be performing brand new songs from their upcoming album, Oceans. Support is from South of Salem and Jordan Red.