Released 40 years ago, Diamond Head’s ‘Lightning To The Nations’ album was one of the prime catalysts for The New Wave of British Heavy Metal and would form the template for the young Metallica.

The album has been re-recorded and will be released 20 November 2020, via Silver Lining Music.

The first track, ‘It’s Electric’, is available to watch below and the timeless riffing is now updated with a fresh and vibrant energy.

Of the track, Brian Tatler told MetalTalk: “It was written 15 June 1978 and it was the forty-fifth song Diamond Head ever wrote.

“It was kind of our version of an AC/DC song. I had noticed that AC/DC had gaps in their riffs, so I thought I would do one in that vein and out came ‘It’s Electric’. It was fast and exciting and soon found its way into our live set.

“We had the pleasure of opening for AC/DC in January 1980 and performed ‘It’s Electric’ in the set.

“I looked over to my left and noticed we were being watched by Bon Scott!”

The original version of the track was on the 1980 MCA compilation album ‘Brute Force’ and it was the first Diamond Head track Lars Ulrich ever heard.

“Three and a half minutes after the needle hit the record on ‘It’s Electric’ by Diamond Head, I was hooked.”

Tatler says: “Metallica covered this song on their 1998 album ‘Garage INC’. Sean and I wrote ‘It’s Electric’ in the key of G but Metallica transposed it to F# to make it easier to play.

“I have played it their way ever since”.

As the 40th Anniversary approached, the band realised that a celebration was in order and Brian and vocalist/producer Rasmus Bom Andersen came up with a plan.

Tatler says: “We thought it would be great to re-record the debut album with this line-up and the modern technology available.

“The original album was recorded and mixed in a week and we were very young, still 19/20 years old when it was recorded, so there’s a lot of that youthful energy.

“But we didn’t have the technique, time or craftsmanship to record it with the sort of power that we could now.

“So that was a real thing to savour: the opportunity to go in the studio and record these songs fresh and vibrant.”

Brian and Andrew ‘Abbz’ Abberley recorded the guitars through February and March this year at Andersen’s Raw Sound Studios in London, with the other parts recorded across various locations including France and people’s home studios.

As COVID-19 kicked in, Andersen worked on the album between April and July, with Tatler’s watchful ear inspecting final mixes and tweaks in early August, before sending it off to mastering at Metropolis Studios.

As well as the seven tracks on the original album, there are an additional four great cover versions on this release, including Metallica’s ‘No Remorse’.

“Lightning To The Nations 2020 is packed with ideas and riffs, but there is some thought gone into it all and maybe that’s why it still sounds really good now and we’re still having conversations about it.”

Lightning To The Nations 2020 Track Listing:
Lightning to the Nations
The Prince
Sucking My Love
Am I Evil?
Sweet and Innocent
It’s Electric
Helpless
No Remorse
Immigrant Song
Sinner
Rat Bat Blue 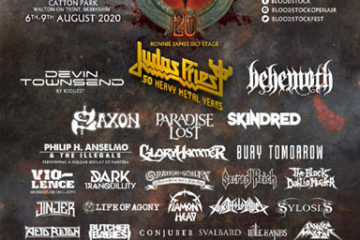