Déluge / Making a musically bold move, born out of a visionary audacity

France has produced some pretty distinctive bands over the years. Some within Metal and some with close links to Metal, but one of the most unique has to be Déluge, a band who consider themselves inspired by Black Metal rather than being part of the Black Metal scene

Déluge proudly labelled themselves in the beginning as “’untrve’ French Black Metal.”

Founding guitarist François-Thibaut Hordé told us: “It was almost a joke, but actually I thought that it could define us well and act as a mark of honesty. I discovered the Black Metal scene very late and I really did not want to play the ‘trve’ card.

“I wanted to admit that I am not from the scene, though I hope we can add something to it.”

Musically they deliver an unusual blend of Black Metal and Post-Hardcore, which as someone more used to the “Trve cvlt” Black Metal, I found it a little hard to initially get my mind around. However, that sense of intrigue I felt about what they were trying to create, powered my perseverance with ‘Ægo Templo’, their second full length and follow up to their 2015 debut ‘Æther’ and that perseverance won through.

With ‘Ægo Templo’, their aim was to produce a more accessible record that pushes their sound in ever more imaginative directions. 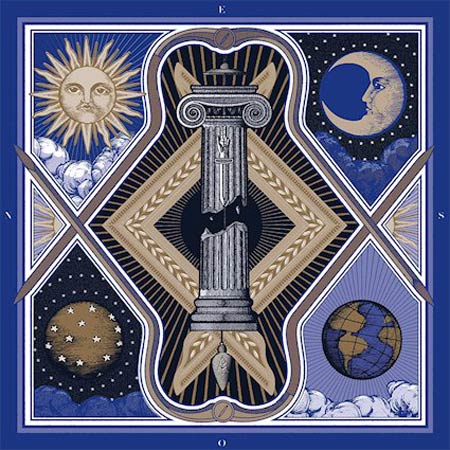 Hordé says: “I wanted to go further into something more ‘easy to listen to’ but I really did not want to lose what we had, that melancholia and the essence of our music.

“It was a very interesting and exhausting challenge and to me we have succeeded. We are really proud of this new record.”

Given that their sole aim was to create bright, powerful and honest music inspired by Black Metal, they certainly have achieved their goal.

With the inclusion of Post-Hardcore and Post-Metal influences, clean vocals, Post-Metal screams and harsh vocals, there is also a range of instrumentation including keyboards and soprano saxophone on ‘Opprobre’ from Matthieu Metzger.

There are  other guest appearances from Tetsuya Fukagawa of Japanese Screamo legends Envy on ‘Gloire au silence’ and Hélène Muesser contributes vocals on ‘Abysses’, ‘Ægo Templo’ and Digue’.

Lyrically, vocalist Maxime Febvet explains: “‘Ægo Templo’ is more about the work needed to be done to be better or more accomplished persons.

“The eponymous track ‘Ægo Templo’ really defines the essence of the albums meaning, while ‘Opprobre’ is about treason and the terrible consequences it has in people’s lives and minds.

“‘Béryl’ might be the darkest song we have ever written. It is about mourning, not necessarily death, but mourning of health and the way it reflects in others’ lives, while the last track ‘Vers’ links all the tracks together and constitutes the perfect conclusion to the album and opens a window to the next one.”

‘Ægo Templo’ is a very bold move musically, born out of a visionary audacity that I totally admire.

Déluge are not afraid to challenge and destroy boundaries. The insane disparity between the Post-Hardcore, Post-Metal and Black Metal makes for a hugely surprising listen. The tracks, within themselves ebbing back to quietly sublime, sometimes haunting, yet other times reflective, are always with an atmospheric quality and burst forth into searingly intense blackened riffing.

There is a lot of added atmosphere from sound bites of waves lapping on a shore as heard on ‘Opprobre’, ‘Diague’ and ‘Vers’. Then there are the haunting female vocals and spoken element which elevates to post hardcore screams on ‘Abysses’.

A couple of tracks stood out for me. The haunting atmospheric and angular instrumental ‘Fratres’, for me, was even more eerie and unique than the rest of the album.It is a superbly unnerving and melancholy track which builds in intensity and in expectation, only to drop away to silence.

The other was ‘Béryl’. It is very angular and stark, atmospheric but brutal and acerbically harsh and tortuous, but with a harmonious background to the design. A powerful track which builds continually upon itself, being lyrically sparse, yet hugely expressive. For me the best track of the album.

I admit there is also a safe element in there for me to, as a dyed in the wool Trve Black Metal fan, it offered a safe space for me within it’s brutal familiarity, but that does not detract from the fact that it still remains a superb track.

‘Ægo Templo’ is out on Metal Blade Records 6 November recommended for fans of Conjurer, The Ocean and Downfall of Gaia.

Déluge / Making a musically bold move, born out of a visionary audacity

JONATHAN CHURCHILL: DEFENDING OUR ISLAND: AN EVENING WITH ALICE COOPER AND JOHNNY DEPP