Competition: MetalTalk have one Black Sabbath Vol.4 Vinyl Super Deluxe box set to give away. (Sorry, UK Only).

Rodger Bain, who had produced the previous three albums, had moved on, as the band had decided to work on producing the album themselves.

Bill Ward has said: “We had been working literally non-stop. At that point we had been on the road, I think, for probably about four years and we had not stopped. We had visited L.A. when we played concerts here and all of us liked Los Angeles.

“We felt it was pretty laid back here, so we probably were attracted to the fact it was a much slower pace here and we could actually relax.”

That relaxation however, was at 70’s Metal excess levels, as the band consumed piles of powder and other substances. Stories of regular deliveries of speaker boxes full of cocaine have been shared numerous times over the years. 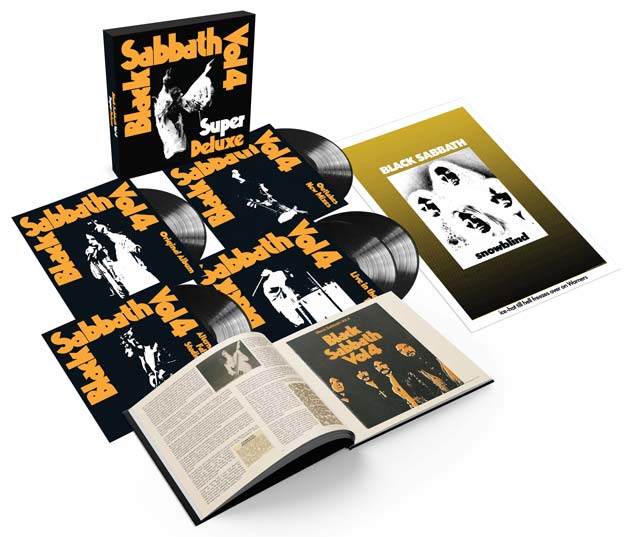 Yet, the resulting album, ‘Vol.4’, turned out to be Sabbath’s experimental masterpiece, featuring the piano ballad ‘Changes’, orchestration on ‘Snowblind and ‘Laguna Beach’ and an almost Cuban influence on ‘Supernaut’.

Released in September 1972, ‘Vol.4’ was initially dismissed by the critics, but not by the fans as the album achieved gold in less than one month and it soon matched the success of the first three album by also selling one million copies in the US.

Sabbath went on to tour the United States, then Australia, for their first tour there in 1973, and then they hit Europe. The fourth part of the new Deluxe package consists of twelve tracks recorded on the March UK tour, which have been mixed from the original analogue tapes by Richard Digby Smith in April 2020.

And this is one of the many gems in the package.

With Ozzy imploring the crowd to “Get Up!!” as the band storm in to ‘War Pigs’, or sniffing into the microphone as he announces ‘Snowblind’ (“One up the Nose!”) you can sense the aura of the band and fun that the y were having on that leg of the tour.

Tight, atmospheric, Sabbath are on great form and that the tracks are mixed from the original tapes adds a level of fidelity not heard on any previous versions.

Twenty minutes of ‘Wicked World’, with guitar solo, then through ‘Orchid’, ‘Into The Void’ and ‘Sometimes I’m Happy’, this then runs into four minutes of ‘Supernaut’, with drum solo, and then straight into a reprise of ‘Wicked World’ with a bit of time left for Geezer to have a go at the front.

Just over twenty six minutes of ripping passion, is one immense chunk if the ‘concert’.

The ripping version of ‘Children Of The Grave’ is truly fantastic.

This part of the deluxe package alone, is a must hear for fans of that era of Black Sabbath.

This runs into a false start on ‘Wheels Of Confusion’ and you are almost a fly in the studio. The third part of the package is a collection of such fantastic moments from the May ’72 Record Plant recordings.

Mixed directly from the analogue tapes by Steven Wilson in February 2020, CD3 covers 11 cracking Sabbath ‘work in progress’ moments, which is sure to be of interest to Sabbath collectors.

CD2 consists of six previously unreleased studio outtakes from the original sessions for the album, again remixed from the analogue tapes.

The final icing on this piece of Sabbath cake, is the remastered version the original album, which has been completed by Andy Pearce and Matt Wortham in 2020.

Crisp, clear, nicely balanced, this really showcases the album at its best.

Included with the package is a full size poster and the most fascinating book, featuring liner notes, newspaper reviews, interviews and posters from the ‘Vol.4’ years. This really tops of the whole package, making is a must buy for fans of Sabbath and that era of Heavy Metal.

How do you top the CD boxset? Easy. Get the Vinyl version.

Now, the question is, when are they going to give the same treatment to ‘Technical Ecstasy’ and ‘Born Again’?

To win a copy of Black Sabbath Vol.4 Super Deluxe Vinyl Boxset, say ‘Hello’ to MetalTalk in an email via comp@metaltalk.net.

Suzi Quatro / 'The Devil In Me' is a gem, chock full of surprises 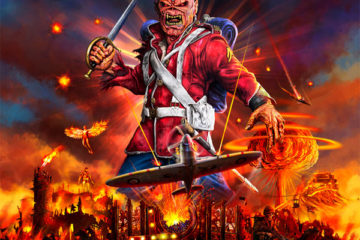